Orbiting Jupiter, NASA’s Juno spacecraft streaked past Ganymede on Monday, beaming back the first close-up views of the largest moon in the solar system since the Galileo orbiter last flew past in 2000.

“This is the closest any spacecraft has come to this mammoth moon in a generation,” Scott Bolton, the Juno principal investigator at the Southwest Research Institute, said in a statement. “We are going to take our time before we draw any scientific conclusions, but until then we can simply marvel at this celestial wonder, the only moon in our solar system bigger than the planet Mercury.”

Juno raced by Ganymede at 1:35 p.m. EDT Monday, passing within about 645 miles of the moon and capturing a razor-sharp view of the cratered world, thought to harbor a sub-surface sea beneath an icy crust. Along with capturing fresh images, Juno’s suite of science instruments also collected data.

“Ganymede’s ice shell has some light and dark regions, suggesting that some areas may be pure ice while other areas contain dirty ice,” Bolton said before the flyby. Juno “will provide the first in-depth investigation of how the composition and structure of the ice varies with depth, leading to a better understanding of how the ice shell forms and the ongoing processes that resurface the ice over time.”

Juno was launched from Cape Canaveral in 2011 and braked into orbit around Jupiter on July 4, 2016. Still going strong at the end of its initial two-year primary mission, NASA has now approved two extensions, the latest running from this summer to mid-2025.

The probe’s 53-day polar orbit was set up to slowly move the point of closest approach northward as the flight progresses. On the far side of the orbit, the spacecraft initially crossed the equatorial plane well beyond the orbit of Ganymede.

But the point of closest approach has moved inward throughout the mission and the latest extension provided a golden opportunity to make close flybys of Ganymede, Europa and volcanic Io.

The Ganymede encounter Monday was set up to use the moon’s gravity to bend the trajectory slightly, reducing Juno’s orbital period by about 10 days. That, in turn, sets up a flyby of icy Europa on September 29, 2022, and two close flybys of Io on December 30, 2023, and February 3, 2024.

“So we have these close flybys of the satellites that are going to allow us to now point our instruments at the satellites, get the first close-up analysis and look for changes since the days of Galileo and Voyager,” Bolton said.

Juno is not equipped with a telescope for close-up, narrow-angle observations. Instead, its “Junocam” imager was intended primarily for wide-angle, contextual observations and public outreach, providing spectacular hemispheric views of Jupiter’s turbulent atmosphere.

“When we’re really far away, we can’t make a high-resolution shot,” he said. “But when we’re close up, we get a wide field of view at high resolution.” That wide field of view, he said, “makes all the difference when you’re looking at it, saying do I understand the context?”

Junocam captured almost an entire side of Ganymede during the probe’s flyby Monday. Shots using different filters will be combined later to provide color views, resolving surface features as small as six-tenths of a mile across.

Juno’s navigation camera captured a more zoomed-in view of Ganymede’s dark side, illuminated by sunlight reflected from Jupiter. Additional images stored on board the spacecraft will be beamed back later.

Wed Jun 9 , 2021
Visitors can return to Arlington House, The Robert E. Lee Memorial, starting on Tuesday. An extensive overhaul by the National Park Service brought together descendants of both General Lee and enslaved people who once lived and labored on his estate. It was a moment nearly 200 years in the making. […] 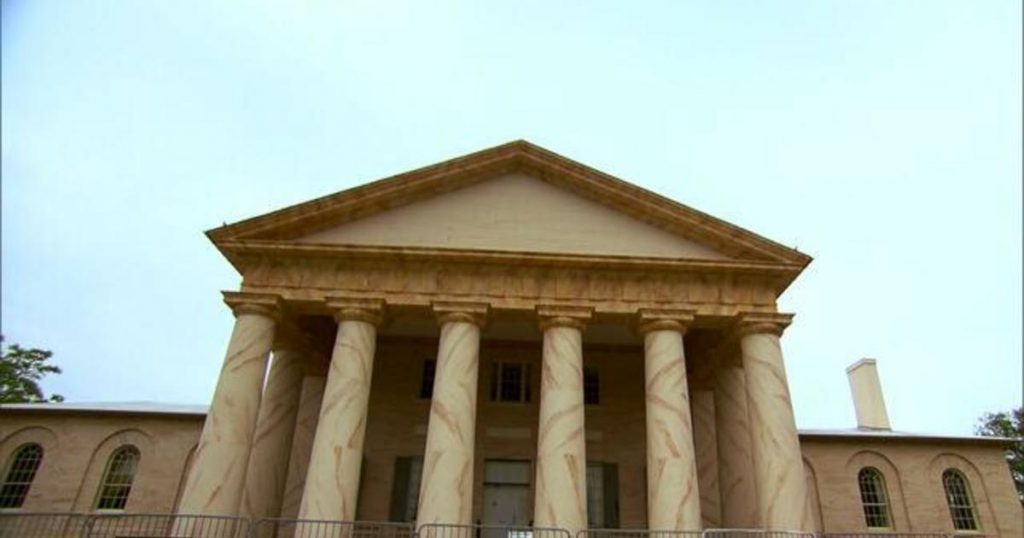