Acting White House chief of staff Mick Mulvaney said he will not resign following a raucous Thursday press conference in which he acknowledged that President Donald Trump withheld military aid from Ukraine over certain conditions.

“Absolutely not. Absolutely positively not,” he told Fox News on Sunday, when host Chris Wallace asked if he had thought about resigning.

“Did I have the perfect press conference? No,” he said, adding that he believes Trump thinks he has done a “pretty good job” as chief of staff.

At Thursday’s press conference, Mulvaney said that the withholding of aid occurred because Trump wanted Ukraine to investigate the possibility of interference in the 2016 U.S. presidential election. He said the aid was held up partly over Trump’s concerns about a Democratic National Convention computer server alleged to be in Ukraine. Trump’s demands of Ukraine earlier this year are at the center of an impeachment probe by Democrats in the House.

Hours after the briefing Thursday, and amid a firestorm of criticism, Mulvaney walked back on his comments and said that Trump had never told him to withhold any aid “until the Ukrainians did anything related to the server.”

Mulvaney insisted on Sunday that his comments at the presser had been misinterpreted. He said there were only two issues regarding Ukraine aid: concerns about corruption and money from other European nations.

Wallace told Mulvaney that “you said what you said,” pointing out that Mulvaney had listed three conditions at the briefing.

“Anyone listening to what you said in that briefing could come to only one conclusion,” Wallace said. He showed clips from the press conference, one of which showed a reporter saying that the situation of withholding aid to get Ukraine to conduct a probe at Trump’s request was in fact a quid pro quo, to which Mulvaney responded, “We do that all the time with foreign policy.”

“I never said there was a quid pro quo, because there isn’t,” Mulvaney told Wallace. “The money flowed without any connection whatsoever to the DNC.”

Mulvaney also addressed widespread criticism of Thursday’s announcement that Trump would host the G-7 summit at his Doral Miami resort. Two days after the announcement, Trump reversed the decision to have his golf resort host the meeting of world leaders.

“Based on both Media & Democrat Crazed and Irrational Hostility, we will no longer consider Trump National Doral Miami as the Host Site for the G-7 in 2020,” Trump tweeted on Saturday.

Mulvaney defended Trump’s original decision to host the meeting at his resort, and said the president was “surprised at the level of pushback.”

“At the end of the day, [Trump] still considers himself to be in the hospitality business,” Mulvaney told Wallace.

Sun Oct 20 , 2019
Ciudadanos party leader Albert Rivera holds Catalan and Spanish flags during a demonstration in support of the unity of Spain at Sant Jaume square outside of Government of Catalonia headquarters in Barcelona, Spain, October 20, 2019. REUTERS/Rafael Marchante October 20, 2019 By Isla Binnie BARCELONA (Reuters) – One of the […] 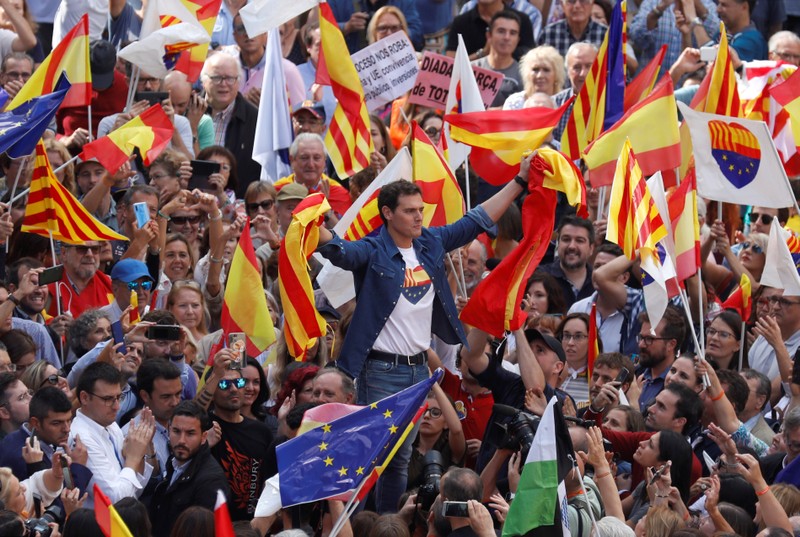