SHANGHAI (Reuters) – China’s new Nasdaq-style board for homegrown technology firms started trading on Monday, with most of the stocks surging in their debut.

Most of the first batch of 25 companies – ranging from chip-makers to biotech firms – climbed quickly in early trade on the STAR Market, operated by the Shanghai Stock Exchange.

Zhangjiang Hangke Technology Inc <688006.SS> was the first company to hit an upper-limit circuit breaker designed to temporarily halt trading in a bid to calm frenzied buying, climbing 30% from the market open.

Suzhou Harmontronics Automation Technology Co Ltd <688022.SS>, however, triggered its circuit breaker in the opposite direction, falling 30% from the market open.

SSE said that an index tracking the STAR Market will be launched on the 11th trading day following the debut of the 30th company on the board.

Modeled after Nasdaq, and complete with a U.S-style IPO system, STAR may be China’s boldest attempt at capital market reforms yet. It is also seen driven by Beijing’s ambition to become technologically self-reliant as a prolonged trade war with Washington catches Chinese tech firms in the cross-fire.

Even veterans of China’s notoriously volatile stock markets had braced for a wild opening day on the new board, after initial public offerings (IPOs) were oversubscribed by an average of about 1,700 times among retail investors.

Mon Jul 22 , 2019
A demonstrator holds a Palestinian flag during a protest against Israeli plans to demolish Palestinian homes, in the Palestinian village of Sur Baher which sits on either side of the barrier in East Jerusalem and the Israeli-occupied West Bank July 20, 2019. REUTERS/Mussa Qawasma July 22, 2019 By Ali Sawafta […] 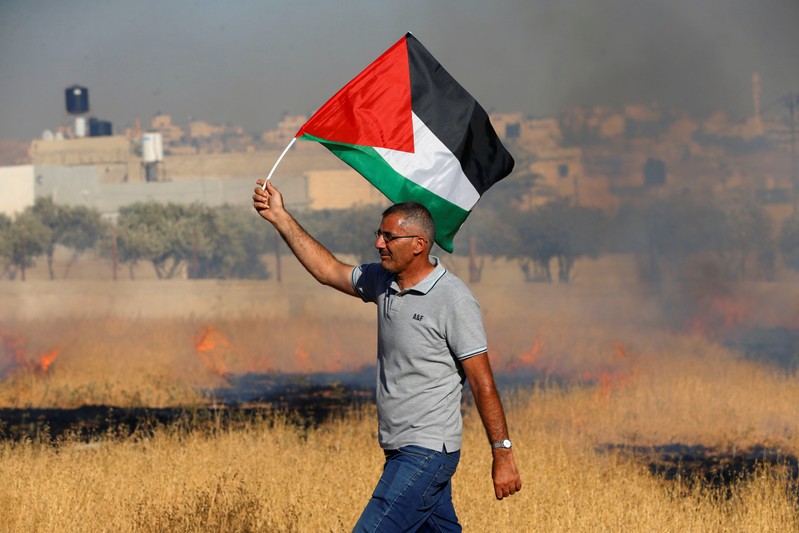