Charlie Blackmon hit an RBI double in the eighth inning to complete the cycle, and the Colorado Rockies beat the Washington Nationals 12-0 on Sunday in Denver to tie the Los Angeles Dodgers for first place in the National League West.

Blackmon tripled in the first, homered in the third and singled in the fifth to help Colorado make quick work of the Nationals and force an extra game for the division crown.

The Dodgers and Rockies will meet Monday in Los Angeles, with the winner taking the division and the loser playing either the Milwaukee Brewers or the Chicago Cubs in the NL wild-card game on Tuesday.

Nolan Arenado homered twice, David Dahl and Trevor Story also went deep, and Tyler Anderson pitched 7 2/3 sharp inning for the Rockies, who will play in a 163rd game for the second time. In 2007, they beat the San Diego Padres to earn a wild-card berth, and then went on to sweep through the NL playoffs on the way to the World Series.

Justin Turner and David Freese drove in the Los Angeles runs in the first inning before Kemp had a two-run double and Brian Dozier a two-run homer in the third, during which the Dodgers went up 9-0. It was Dozer’s fifth homer since joining the Dodgers at the trade deadline, and his 21st counting his time with the Minnesota Twins.

Jesus Aguilar homered and drove in three runs, and host Milwaukee remained tie for first in the NL Central by pummeling Detroit.

The Brewers will visit the Cubs in Chicago on Monday to decide the division title. The loser of that contest will play host to the NL wild-card game on Tuesday against the Dodgers or the Rockies.

Anthony Rizzo scored three runs and went 4-for-4 with two doubles, two singles, one RBI and one walk to lead the Cubs’ offense. Allen Webster (1-0) got two outs to close the third inning, earning his first major league win since 2015.

Chicago used nine pitchers to close out the win, the Cubs’ second in the weekend series against their rival.

After manager Mike Scioscia announced he was stepping down, his team beat Oakland to win the season finale at Anaheim, Calif.

Jefry Marte, who had homered earlier, laced a double into the left field corner, scoring Ohtani, and setting the stage for Ward’s heroics. The rally made a winner out of Parker Bridwell (1-0), who pitched a 1-2-3 top of the ninth.

Trey Mancini, Tim Beckham and Renato Nunez each drove in a run for Baltimore, which finished 47-115 and set a franchise record for losses.

The American League West champion Astros finished with a record of 103-59, a franchise record for wins, and they are headed to the AL Division Series to play Cleveland.

Trevor Bauer added four scoreless innings to earn the save in support of Carrasco in his final tune-up before the postseason.

Lindor hit his 38th home run of the season in the third inning. Carrasco (17-10) gave up just one run on three hits, with two walks and six strikeouts. The right-hander, who won for the first time since Aug. 28, is next expected to pitch in Game 2 of the ALDS.

J.D. Martinez hit a three-run homer in the fourth inning, and host Boston concluded the best regular season in team history with a victory over New York.

Martinez gave the Red Sox a 10-2 lead when he drove an 0-1 pitch from Justus Sheffield over the center field fence and into the Boston bullpen. Reliever Robby Scott was warming up and caught the ball in his cap. It was Martinez’s 43rd homer and upped his RBI total to 130.

Xander Bogaerts added a two-run homer as the Red Sox raced out to a 7-0 lead through the second inning.

The loss cost the Braves, the National League East champion, a chance at the second seed in the NL playoffs. Atlanta will continue its campaign against either Los Angeles or Colorado on the road on Thursday.

The Phillies won for the second consecutive game after they had dropped nine straight outings to fall out of contention for the NL East title and into third place in the NL East.

Syndergaard (13-4), who took two trips to the disabled list this season due to a finger injury and hand, foot and mouth disease, allowed five hits, walked none and struck out six.

The Marlins got only one runner into scoring position against Syndergaard, who gave up a two-out double to Magneuris Sierra in the eighth before striking out JT Riddle. The Mets scored the game’s only run in the fourth, when Jeff McNeil hit a leadoff single and scored on Todd Frazier’s two-out double.

Manuel Margot scored from third in the 10th inning as Arizona catcher John Ryan Murphy was throwing out pinch hitter Francisco Mejia at first on a strikeout to give host San Diego a walk-off win.

Margot, who homered earlier in the game, tripled with one out to bring up Mejia to face Jake Barrett (0-1). Mejia swung and missed at an 0-2 pitch from Barrett, but the ball skipped a short distance away from Murphy. As the catcher threw to first, Margot broke for the plate to beat the throw from first baseman Daniel Descalso.

Pablo Reyes tripled and scored on a the 10th-inning wild pitch to give Pittsburgh a win at Cincinnati.

Starling Marte and Josh Bell hit solo homers for Pittsburgh, and manager Clint Hurdle got his 1,200th victory. He has 1,253 losses.

Tim Federowicz hit a two-run homer and Dilson Herrera a solo shot for the Reds.

Max Kepler and Jake Cave each homered to lead Minnesota to a victory over Chicago at Minneapolis in what may have been the final game of 2009 American League MVP Joe Mauer’s career.

Mauer, 35, went 1-for-4 — a signature line-drive double to the gap in left-center in the seventh inning on a 3-2 pitch off reliever Juan Minaya. It was the 2,123rd career hit and club record 428th career double for the three-time AL batting champion.

Mauer, who said he will decide in a couple weeks whether he will retire or play again after finishing up an eight-year, $184 million contract, made a surprise appearance behind the plate for one pitch to start the ninth before leaving the game to another standing ovation.

Joey Wendle added two RBIs as the Rays won the final two games of the series to take the season series 13-6 against the Blue Jays. Pham extended his on-base streak to 32 games.

Kevin Pillar was 3-for-3 with an RBI double for Toronto.

The Mariners took three of four games against the Rangers to win the season series 10-9, giving them a winning record against every other team in the American League West this year.

Elias (3-1) allowed only one hit, a leadoff single to Adrian Beltre in the second inning, didn’t walk a batter and struck out four. Four Mariners relievers combined for four innings of one-run ball, with Shawn Armstrong tossing the ninth for his first career save.

Mon Oct 1 , 2018
TORONTO — The U.S. and Canada announced late Sunday night they had reached a deal for Canada to stay in the North American trade pact with the United States and Mexico. The word came from United States Trade Representative Robert Lighthizer and Canadian Foreign Affairs Minister Chrystia Freeland. The announcement was made […] 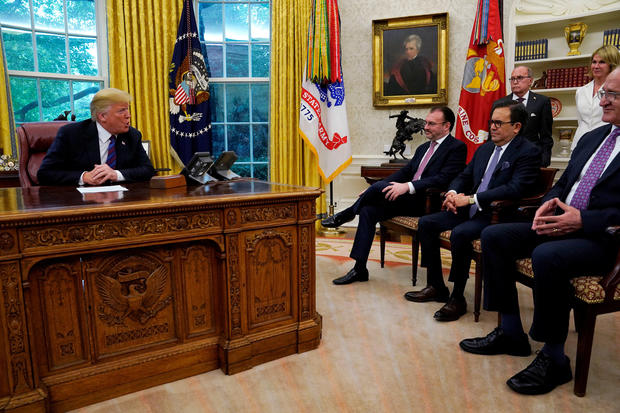