As she flew overhead in a helicopter, medical nurse Erin Johnson scanned the riverbank of the Rio Grande looking for Randy Bilyeu, a 53-year-old Colorado grandfather. Bilyeu had set off from a spot near Santa Fe 10 days earlier in a small raft, searching for a chest of gold hidden somewhere in the Rocky Mountains by millionaire Forrest Fenn.

It was all part of a game Fenn had dreamed up. The former Santa Fe art gallery owner had launched a modern-day treasure hunt in 2010 with the publication of his memoir, “The Thrill of the Chase.” Fenn had embedded a cryptic poem inside the memoir and promised that, if one clever person followed the clues correctly, “you’ll be amazed at what you find,” Fenn told CBS News in 2015.

The treasure chest contained an estimated $1 million in gold and other valuables and, if you found it, it was yours to keep. Randy Bilyeu had caught gold fever and was on the hunt when he went missing.

The story of Fenn’s gold will be featured in “The Fenn Treasure,” an all-new “48 Hours” reported by “CBS This Morning” co-host Tony Dokoupil, airing Saturday, May 22 at 10/9c on CBS. Dokoupil wrote a long article about Fenn’s treasure in 2012 for Newsweek magazine. That article is widely credited with introducing Fenn’s modern-day treasure hunt to a national audience.

Tens of thousands of searchers from around the world heeded Fenn’s call and headed to the Rocky Mountains. Fenn had said the chest was hidden in one of four states: Montana, Wyoming, Colorado or New Mexico.

Randy thought he had a bead on the location and set off in January 2016 to claim the prize. He brought along his trusty sidekick Leo, a long-haired Jack Russell terrier. The two were inseparable and if you knew Randy, you knew Leo.

But after pushing his raft into the Rio Grande, neither friends nor family heard from Randy and, after 10 days, he was reported missing. Erin Johnson was the flight nurse aboard a medical helicopter sent out to try and find any sign of Randy.

Pilot Satoshi Mori flew as low as possible, given the FAA regulations and the high tension wires in the area. They left near the spot Randy had put his raft in the water and headed downriver to Cochiti Lake. They flew around the lake and had just enough fuel to go back upriver and scan the shoreline.

“And that’s actually when we fortunately found his raft,” she said.

The raft was upside down and Erin and the pilot didn’t see any signs of life. The pilot put the chopper down on a nearby sand bank so the team could search on foot. “The bank did support us. We were very fortunate,” she said. “When we shut down the helicopter and got out — we could very plainly see the raft. And it was at that time that we saw that there was a small dog that was there and barking at us and still alive.”

Erin said the crew knew that Randy had been with a dog. After 10 days out in the cold, Leo appeared shaken and defensive.

“We were not able to get close to him for about an hour. He was very, very aggressive, barking at us quite ferociously. And just anytime we tried to approach him, he just quickly would back up …”

The crew was surprised Leo had survived not only the elements, but the wildlife in the area. “I’m sure that there’s coyotes and mountain lions and all sorts of different animal habitat that come to the river to get water. I’m certain that Leo had encountered many of those animals in his short little stint there.”

Erin could plainly see that Leo was wearing a sweater. “Leo did look pretty mangy. He had a sweater on, which was pretty dirty,” she said. “It was pretty mangy also. But I’m quite certain that that sweater saved his life … it was so bitterly cold that it’s hard to believe he survived at all.”

After searching the area for Randy and finding no sign of him, the crew got ready to leave, but Leo still wouldn’t allow them to get close. That’s when Erin asked if anyone had any food. The pilot did.

“He was the only one of us that had food on him. It’s very commonplace for flight crew to carry a granola bar or a Clif bar or something of the like. And he was the one that actually had one on him,” she said.

“It was rock hard. So, I actually had to bite a piece off of it and — and chew it up just a little bit before I handed it to Leo. And the first time I handed him a piece, he wouldn’t take it.

“But then I’d go away, and I’d come back. And I think finally on the third or fourth time, he was willing to come take it from me. And after that, he took several pieces. He was obviously starving. And so ultimately, it was the Clif bar that saved Leo’s life.

“And at the point where we had to leave, I had a big, thick jacket. And I just threw it over him and scooped him up and brought him on the helicopter. And I thought that he was going to fight me and be ferocious. But he wasn’t … once he had started accepting food and once my jacket was thrown over him, he took it very well. And he actually rode very calmly in the helicopter back to our base.”

Initially, Erin turned Leo over to a local animal shelter which cared for him while the authorities contacted Randy’s relatives. But Erin had her heart set on adopting him and, with the cooperation of Randy’s family, Leo became part of her family.

Five years later, Leo — the ultimate rescue dog — is thriving and has even learned a few new tricks.

Once the official search for Randy was called off, his fellow treasure hunters spent months looking for themselves. Drone pilots shot a lot of footage and put it online so searchers could comb through it for any sign of Randy. No one found any. But six months later, his body was found on the riverbank.

Randy was the first treasure hunter to die looking for Fenn’s gold, but he would not be the last. Four others died after Randy. Their loved ones and even a state police chief asked Fenn to call off the hunt, but he refused.

Another person dies looking for famous treasure in Rocky Mountains

Sun May 23 , 2021
Two snowmobile riders from Colorado were searching for an elusive treasure when they became stranded and one died in a Utah park. The pair set out from the Denver area March 17 to search for Forrest Fenn’s treasure, CBS Denver reported. The eccentric New Mexico antiquities dealer had said he […] 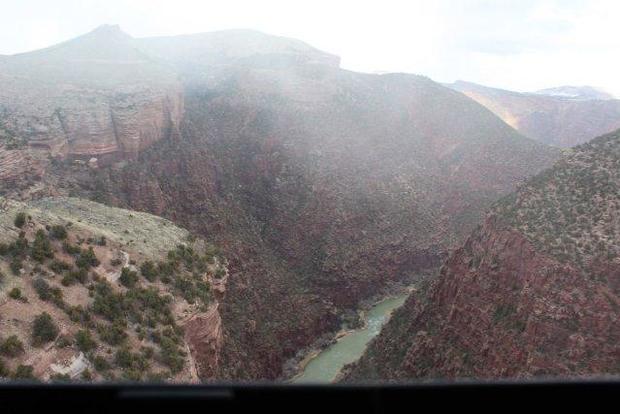