SAN FRANCISCO — Police on Wednesday released video of officers shooting a knife-wielding man who charged at them in a residential hotel.

Ajmal Amani, 41, was shot Friday morning in the narrow corridor of the building on South of Market after threatening several people with a large kitchen knife. He was shot in the stomach and leg and died at a hospital.

Amani was a former Afghan interpreter for U.S. special forces who had been shot several times during more than five years of service and struggled with post-traumatic stress disorder, his former lawyer, his case manager and a property manager told the San Francisco Chronicle.

Amani was charged with assault with a deadly weapon in 2019 for allegedly slashing a city park ranger with a box cutter who said he appeared to be in an “altered mental state.”

Amani was ordered to undergo mental health diversion which he completed this year and was living in a city-rented room at the residential hotel.

Police were called to the hotel on Friday morning by reports that a man was screaming and yelling and had a knife. Amani’s case manager also called 911 to report that a co-worker said Amani was having “a really bad episode.”

On Wednesday, police released hotel surveillance video and footage from officers’ body cameras. They show Amani holding and gesturing with the knife, confronting two people, including someone who is fending him off with a broom, then walking past other people into a room.

When two officers arrive, the man with the broom tells them that Amani had threatened to kill him.

An officer tells the radio dispatcher that they can hear Amani screaming.

According to body camera video, the officers remain in the corridor and try to talk to Amani, who is in a room. Amani swears and tells them to leave him alone and one officer says “nobody wants to hurt you.”

Less than a minute later, Amani charges down the hallway and is shot after an officer shouts: “Stay there! Stay there!”

Police said Amani was holding a knife with a 6-inch blade. He was shot four times with a handgun and three times with bean-bag projectiles.

As Amani lay on the ground, still moving, more officers arrived. They waited several minutes to cautiously approach him, then handcuffed him and used CPR and a tourniquet on him before paramedics arrived.

At a virtual town hall meeting where the video was released, Police Chief Bill Scott said his department and prosecutors were investigating the shooting. Scott said he had personally offered condolences to Amani’s family.

Scott Grant, a deputy public defender who represented Amani, said he was “utterly devastated” by his death.

“His tragic death is a failure of our systems of government here to support somebody who risked his life to support this country,” Grant told KTVU-TV.

Thu Nov 25 , 2021
Los Angeles police are hunting for thieves who rushed into a Southern California Nordstrom store Wednesday night and ran off with pricey goods ByThe Associated Press November 25, 2021, 5:13 AM • 2 min read Share to FacebookShare to TwitterEmail this article LOS ANGELES — Thieves rushed into a Southern […] 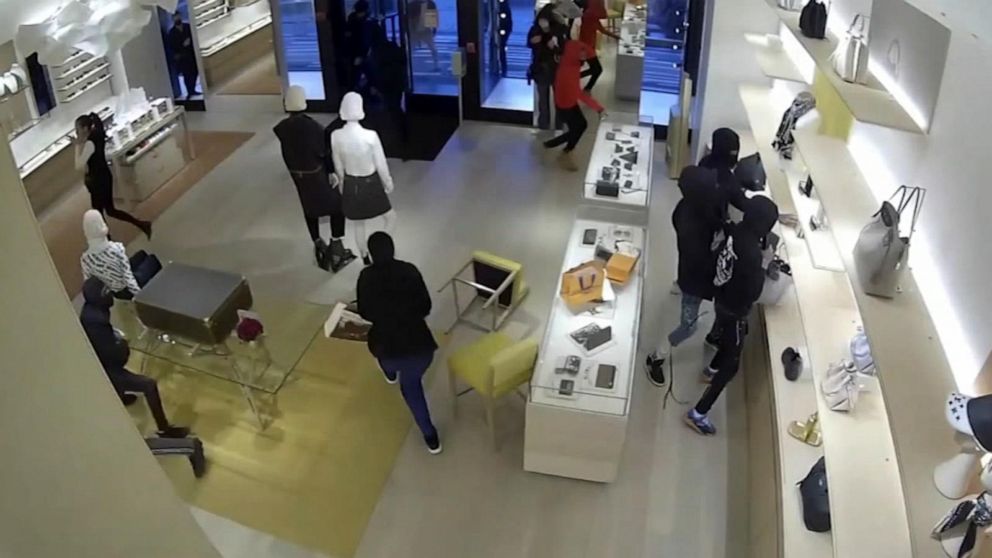