HONG KONG (Reuters) – Police in the world’s largest gambling hub of Macau are hunting for a dealer suspected of stealing HK$48 million ($6 million) worth of casino chips from Wynn Macau, authorities in the Chinese-controlled territory said on Thursday.

Casino thefts in the former Portuguese colony of Macau, which rakes in gambling revenue more than five times that of the Las Vegas strip, are rare, with the majority of cases typically involving employees.

Wynn confirmed to Reuters in an email that the matter was being handled by the police.

Macau’s Gaming Inspection and Coordination Bureau, known as the DICJ, said it was concerned about the incident and had asked casino operators to beef up their security.

The theft, which took place this week, was carried out by a man from Macau who worked in a high-roller VIP room at Wynn’s resort on Macau’s teeming peninsula, media reported.

Public broadcaster TDM said police were also investigating if there were multiple suspects but did not give further detail.

Typically, Wynn casino chips can only be exchanged for cash in Wynn’s casino, so anyone with stolen chips would likely try to cash in small amounts at a time rather than all at once, to avoid attracting attention.

The last major casino heists happened in 2015 and 2016 when employees working in Macau’s VIP parlors stole millions of dollars from junket rooms in the casinos.

Macau’s booming revenues, which totaled $33 billion last year, are underpinned by its VIP junket system, where licensed middlemen act on behalf of casinos to attract “big whale” spenders by arranging their travel and accommodation and handling their gambling credit.

Macau’s six concessionaires Sands China, Wynn, MGM China, SJM Holdings, Melco Resorts and Galaxy Entertainment all rely heavily on the junket industry for more than half of their gambling revenues.

Thu Jan 18 , 2018
People are reflected in a display showing the Nikkei average (top in L) and the NASDAQ average of the U.S outside a brokerage in Tokyo, Japan, November 7, 2016. REUTERS/Kim Kyung-Hoon – S1AEULJVTGAA January 18, 2018 By Shinichi Saoshiro TOKYO (Reuters) – Asian stocks struck record highs on Thursday, with […] 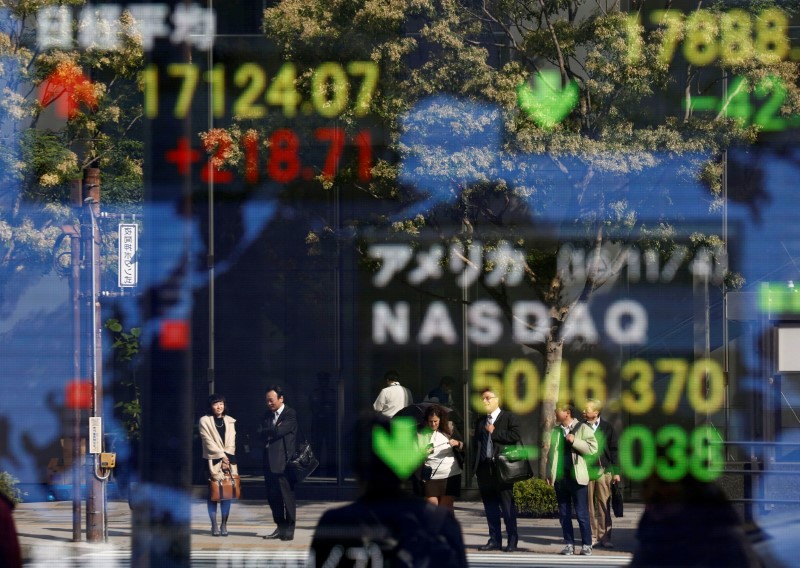