LONDON (Reuters) – Five new platforms and a large concourse opened at London Bridge station on Tuesday as the development of the busy commuter hub in Britain’s capital nears completion.

The station reopened after ten days of engineering work over Christmas and New Year, and the latest milestone in the work allowed busy commuter trains to London’s Cannon Street station to stop at London Bridge once more.

London Bridge is Britain’s fourth-busiest rail station, with 56 million passengers arriving into the city each year.

It serves as a major hub for arrivals from southeast England, and the north-south “Thameslink” service will restore the station’s link with London’s Luton airport when the redevelopment is completed, scheduled for May.

The latest progress came as unions protested at London Bridge and dozens of other UK stations on Tuesday against the introduction of higher ticket prices for the New Year.

On average, train fares have gone up 3.4 percent, the steepest price increase in five years. Britain’s Network Rail said the average rise was below inflation, though campaigners say that fares should be pegged to a different measure of prices.

Tue Jan 2 , 2018
President Trump’s New Year’s Day lambasting of Pakistan on Twitter has drawn an angry response on the streets and an official summoning of the U.S. ambassador in Islamabad to demand an explanation. The president began the second year of his presidency with confrontational tweets targeting Pakistan and Iran. He slammed […] 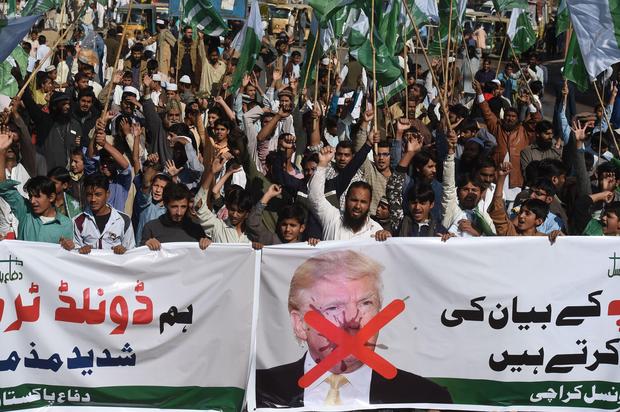