Louisiana’s governor said in a tweet Saturday that Delta left hazards including flooded road and downed power lines in its wake and cautioned that no one should take the dangers lightly.

“Everyone needs to remain vigilant, continue to listen to local officials and be safe,” said Governor John Bel Edwards.

The governor’s office said it had no reports of deaths early Saturday, but a hurricane’s wake can be treacherous. Only seven of the 32 deaths in Louisiana and Texas attributed to Hurricane Laura came the day that hurricane struck. A leading cause of the others was carbon monoxide poisoning from generators used in places without electricity. Others died in accidents while cleaning up.

Some who rode out Laura hunkered down with Delta.

Some who rode out Hurricane Laura hunkered down again with Delta.

Jeanne-Marie Gove could hear debris hitting her door in Lafayette, Louisiana, as her patio gate banged open and shut while Delta hit.

Lake Charles Mayor Nic Hunter spoke with The Associated Press as he rode out Delta’s arrival downtown. He said tarps were flying off homes across the city, and piles of wreckage were being blown around, some of it floating in the surge of ocean water.

Hunter said he thought more people evacuated for Delta than Laura, reducing emergency calls during the worst of the storm. Across the disaster area, people could only wait for the waters to recede before getting a full view of the damage.

“I believe that Delta could actually be more of a flooding issue than Laura was from what I’m seeing and what I’m hearing right now in the thick of it,” the mayor said Friday night.

“We really just need people not to forget about us,” Hunter said. “We are going to be in the recovery mode for months and probably years from these two hurricanes. It’s just unprecedented and historic what has happened to us.”

A Louisiana parish heavily hit by Hurricane Delta is experiencing rising waters from heavy rain. Sheriff Tony Mancuso of Calcasieu Parish told KPLC-TV early Saturday that vehicles were overturned on Interstate-10 westbound and said area residents who evacuated should not be in a rush to return.

He said the situation remains “dangerous.”

Still, anyone who cannot afford to be gone for more than several days can head back, he said, but with caution. People just need “to use some good common sense.”

He said rising water is the biggest problem, and areas prone to flooding have been flooded.

Winds topped out at 100 miles per hour as Delta hit, following nearly the same path as Hurricane Laura.

“I want folks to be hopeful, because we’re going to do everything we can to get them right-side up again” Louisiana Governor John Bel Edwards promised in a press conference.

Delta is the fourth named storm to hit Louisiana in 2020.

Lake Charles minister Darren Worthington, whose church coordinates relief efforts, called the storm’s effects “devastating.” He expressed confidence in his city bouncing back, but admitted that the string of storms this season has taken its toll.

“The need is enormous. It is absolutely enormous. If you have driven around, and I know you have, you just see fences down, blue tarps on every roof,” he said.

“It’s just been that kind of year.”

Over 700,000 power outages were being reported across three states Saturday morning as Delta moves further inland. More than 586,600 were reported in Louisiana, with another 103,598 in Texas and 67,873 in Mississippi, according to poweroutages.us.

Delta inflicted a new round of destruction in communities still reeling from Hurricane Laura. It made landfall near the coastal town of Creole – only 15 miles or so from where Laura struck land in August. It then moved directly over Lake Charles, a waterfront city about 30 miles inland where the earlier hurricane damaged nearly every home and building, and where moldy mattresses, sawed-up trees and other debris still lined the streets.

“Just praying that everything goes well”

In Lake Charles, about 30 miles inland from where Delta came ashore, water leaked through the ceiling of Ernest Jack’s bedroom as he tried to sleep Friday night. Jack said the tarp covering his roof since Hurricane Laura damaged his home hadn’t blown off.

In the town of Lake Arthur, Delta’s winds peeled shingles off the roof of L’Banca Albergo Hotel, an eight-room boutique hotel in what used to be a bank.

“I probably don’t have a shingle left on the top of this hotel,” owner Roberta Palermo said as the winds gusted outside.

Palmero said the electricity was out and she could see pieces of metal coming off the roof of a 100-year-old building across the street. Unsecured trash cans were flying around the streets.

“There is a lot of power lines down all over the place, there’s … really deep water in certain spots,” said hotel guest Johnny Weaver.

Sat Oct 10 , 2020
People enjoy outdoor dining amid the coronavirus disease (COVID-19) outbreak in Manhattan, New York City, U.S., September 14, 2020. Jeenah Moon | Reuters Ice huts, yurts and tents have been growing in popularity over the last several years as restaurateurs looked to extend the life of their outdoor patios. This year, […] 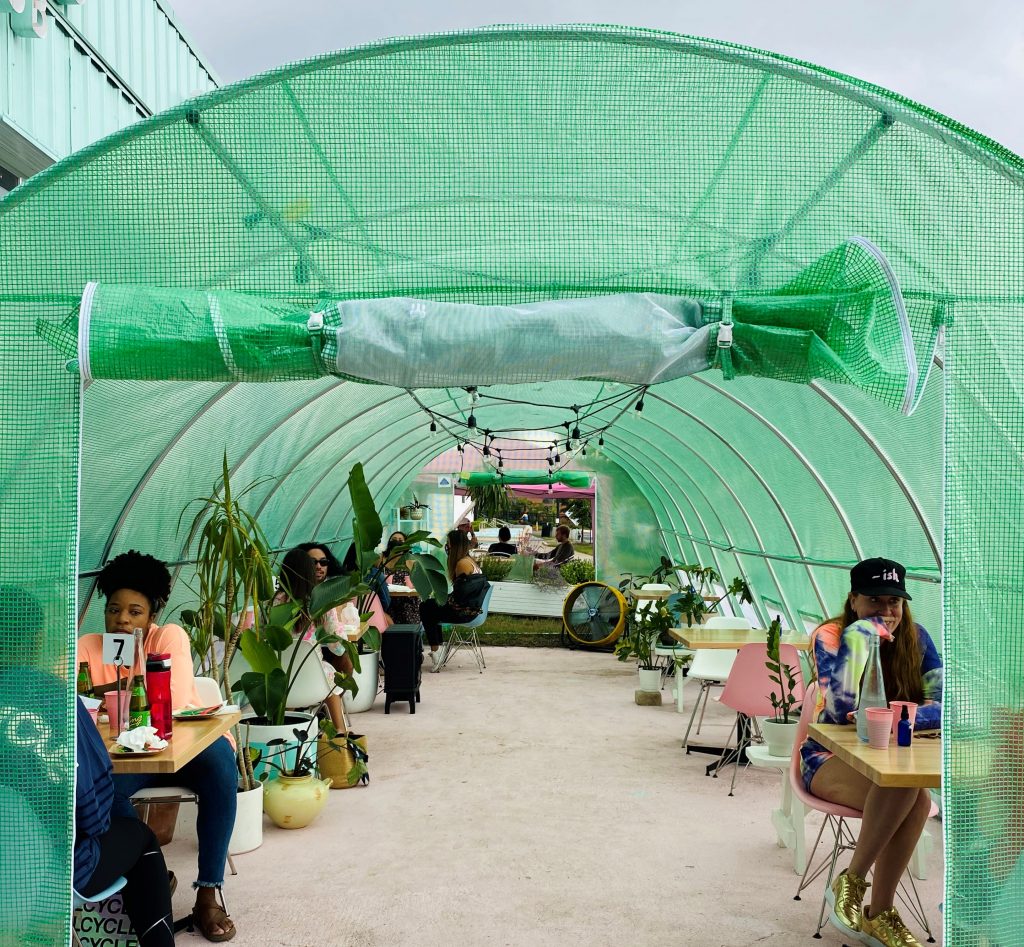