Father Leo J. O’Donovan, former president of Georgetown University and a friend of the Biden family, will lead the invocation. Andrea Hall, who is president of the International Association of Firefighters Local 3920 in Georgia and the first African American woman in her fire department’s history to be promoted to Fire Captain, will lead the Pledge of Allegiance.

Amanda Gorman will do a poetry reading and Reverend Dr. Silvester Beaman will give the benediction.

In addition to the daytime inauguration event, there will also be a primetime special called “Celebrating America,” PIC announced. It will be hosted by Tom Hanks.

Demi Lovato, Justin Timberlake, Ant Clemons, Jon Bon Jovi and others will perform. The special will spotlight American heroes and air live on major networks at 8:30 p.m. ET on January 20.

Usually, the Joint Congressional Committee on Inaugural Ceremonies (JCCIC) would distribute 200,000 tickets for the official inaugural ceremonies at the U.S. Capitol. Members of Congress would also distribute tickets to constituents.

However, due to health risks during the coronavirus pandemic, invitations will be limited to members of Congress and one guest.

“The JCCIC, in consultation with diversified public health and medical experts and the Presidential Inaugural Committee, has determined that this global pandemic and the rise in COVID-19 cases warranted a difficult decision to limit attendance at the 59th Inaugural Ceremonies to a live audience that resembles a State of the Union,” Representative Roy Blunt of Missouri, a chairman of the committee, said in a press release.

Thu Jan 14 , 2021
Rubble is seen near a breached entrance a day after a mob broke into the US Capitol on January 7, 2021, in Washington, DC. (Photo by Brendan Smialowski / AFP) (Photo by BRENDAN SMIALOWSKI/AFP via Getty Images) OAN NewsroomUPDATED 6:15 PM PT – Thursday, January 14, 2021 John Earle Sullivan […] 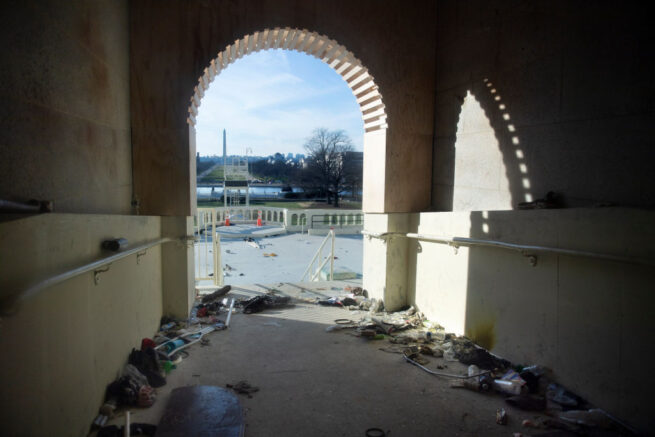