PARIS (Reuters) – American fourth seed Sofia Kenin appeared to be unnerved by the cheers of the sparse partisan crowd as she recovered from a wobbly start to reach the French open quarter-finals with a 2-6 6-2 6-1 victory over France’s Fiona Ferro on Monday.

The Australian Open champion, who next faces compatriot Danielle Collins or Tunisian Ons Jabeur, broke into tears after ending the contest with a service return winner.

She complained that the crowd had been unfair to her.

“The crowd wasn’t the best, which is understandable, but still I wish it would have been a little bit different,” she told a news conference.

“I tried to use that as motivation. Obviously I was not really too happy with how it was going. I knew it’s expected. I understand why. I’m playing a French player, and she’s had a great run here.”

A maximum of 1,000 spectators are allowed per day at Roland Garros amid COVID-19 restrictions, and some 500 attended the match on court Philippe Chatrier, voicing their support for Ferro.

It took Kenin a while to find her range but once she did, she went through the gears and demolished the world number 49, the last French player in the women’s singles draw.

“She played really well, she’s such a tough player to play. Sorry I had to win but I’m just super proud of myself,” said Kenin, who surprised her opponent with several well-executed drop shots.

Kenin broke Ferro’s first service game and moved 2-0 up, only for the Frenchwoman to win six games in a row to bag the opening set, greatly helped by her opponent’s 16 unforced errors.

Kenin, however, took the ball earlier in the second set, which changed the face of the match as Ferro could not keep up with the American’s pace.

“I was making too many errors in the first (set) and I knew I needed to be more aggressive and go for my shots,” Kenin said.

Her aggressiveness was just too much to handle for Ferro, who then never looked able to turn the tide.

“(After the first set) she stared to take the ball earlier and play a little longer and for me it was tougher to react, tougher to adjust. I had a good first set but then she raised her level,” said Ferro.

Mon Oct 5 , 2020
Over 210,000 lives have been lost to the coronavirus in the United States, and on Sunday, the first National COVID-19 Remembrance Day, a powerful installation was set up outside the White House to represent the toll the pandemic has taken on the nation. Twenty-thousand empty chairs were lined up on […] 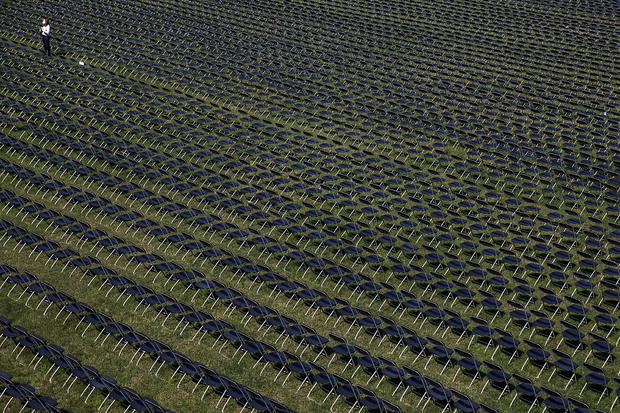