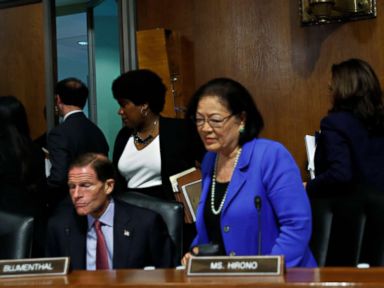 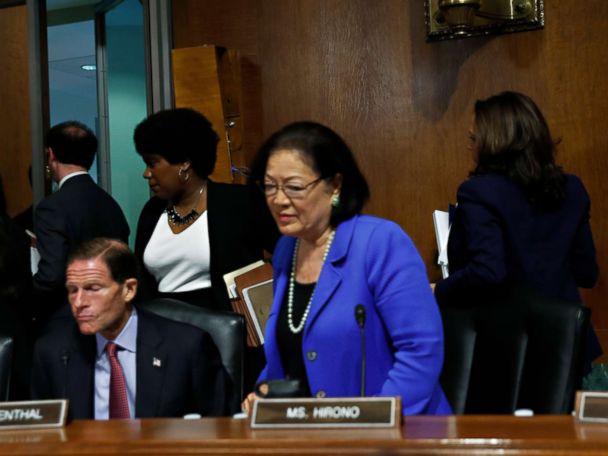 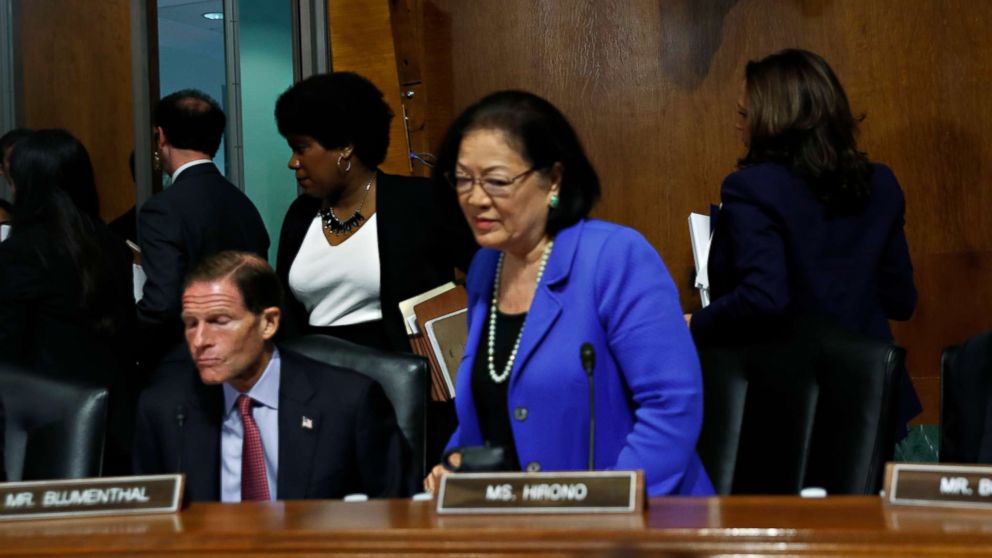 Judge Brett Kavanaugh‘s nomination to the Supreme Court is poised for a vote Friday morning by the Senate Judiciary Committee amid high partisan tensions.

The Republican-led committee began a crucial meeting to debate and then to vote on whether to advance the nomination to the full Senate — a day after nearly nine hours of emotional and at times wrenching testimony from the judge and his accuser, Christine Blasey Ford, on her allegation of sexual assault when they were teens.

Here’s how the day is unfolding:

Hoping to propel Kavanaugh’s nomination forward, Sen. Mike Lee, R-Utah, said, “Our job now is to vote. Today, we’re going to do that.”

Minutes after, Sen. Amy Klobuchar, D-Minn., panned her Republican counterparts, asserting, “There was a lot of chest beating that went on yesterday. On the other side. And it was pretty effective, I guess, if the goal was to distract the American public from what they had heard in the morning, to distract and deflect from the moving, powerful testimony we heard.”

“Where Christine Blasey Ford was calm and dignified, Brett Kavanaugh was volatile and belligerent,” the editorial begins.

Amid the tensions spilling over inside the halls of Capitol Hill over Kavanaugh’s nomination, the editorial board for the New York Times is certain, as it urges the Senate to vote “no.”

“Her description of the attack, which she said occurred in a suburban Maryland home on a summer night in 1982, was gut-wrenchingly specific,” the newspaper continues.

“On Thursday, he gave misleading answers to questions about seemingly small matters — sharpening doubts about his honesty about far more significant ones. He gave coy answers when pressed about what was clearly a sexual innuendo in his high-school yearbook.”

Ultimately, the editorial board says the American public needs “to know the truth.”

“The Senate and the American people need to know the truth, or as close an approximation as possible, before deciding whether Judge Kavanaugh should get a lifetime seat on the nation’s highest court,” the editorial states. “If the committee will not make a more serious effort, the only choice for senators seeking to protect the credibility of the Supreme Court will be to vote no.”

One of the key votes for Kavanaugh’s confirmation on the full Senate floor, which will come after the committee moves forward with a vote, red state Democrat Sen. Joe Donnelly announced in a statement he will vote “no” on the judge’s nomination.

“While I would gladly welcome the opportunity to work with President Trump on a new nominee for this critically important position, if Judge Kavanaugh’s nomination comes before the full Senate for a vote under these circumstances, I will oppose it,” he said.

The Rhode Island senator called into question Kavanaugh’s detailed calendar from the summer of 1982, suggesting that the July 1 gathering includes many of the people Ford said were at the gathering on the night she said Kavanaugh assaulted her.

“You investigate. It’s the least thing a sexual assault victim is entitled to when she comes forward.” pic.twitter.com/NVbfWhkGv9

“Here’s Kavanaugh’s calendar,” he began. “Dr. Ford said that Kavanaugh and judge and P.J. And at least one other boy were all at a house. Well, we know Brett Kavanaugh was there because it’s his schedule. And here’s judge, and here’s P.J. Here are all those three named boys and others at a house together just as she said.”

“She said Kavanaugh and judge were drunk. And that she had a beer. Skis is brewskies, beers. They were drinking, just as she said,” he added.

“Now, I will concede that the two girls aren’t mentioned,” he affirmed. “But spot me this. If you had just sexually assaulted one of the two girls, would you add the girls’ names to your calendar? I doubt it. This may, may be powerful corroborating evidence that the assault happened. That it happened that day. And that it happened in that place.”

“But with no FBI investigation, we can’t tell,” he said.

ABC News’ Trish Turner reports from inside the hearing room that senators Flake and Durbin have left. It is unclear which members will return at this point. They will have to return for the vote set for 1:30 p.m.

Graham has left the committee room, but not before delivering a strong rebuke of the allegations against Kavanaugh.

“This has never been about the truth,” he added. “This has been about delay and destruction and if we reward this – it is the end of good people wanting to be judges.”

Sen. Cornyn added to that chorus of criticisms, repeating comments he made Thursday, “I think this is one of the darkest days for the United States Senate since the Mccarthy hearings that occurred back in the ’50s.”

“Cruelty. Recklessness, indecency. Toward the people we should be treating with respect and dignity.”

“How could you listen to her honest and direct testimony and draw that conclusion,” he posed. “This undertaking is deeply personal, and there is humanity to reconcile on both sides of the ledger,” he added.

Amid high tensions, Sen. Graham offered a few observations on the current state of affairs.

“I would like to tell him that you had a choice to make for the Supreme Court vacancy of Justice Kennedy,” he said. “I think you did a good job, Mr. President. For somebody who supposedly is crazy and there’s chaos everywhere, he did a good job here.”

Despite admonishing Democrats’ tactics, claiming “Y’all want power” the day before, the South Carolina Republican said, “You lost the election. And that does have consequences.”

He continued his ardent defense of Kavanaugh, telling the committee, “I have never heard a more compelling defense of one’s honor and integrity than I did from Brett Kavanaugh.”

Upon walking out of the committee room, the Democrats marched up together before a microphone and spoke alongside protesters to a gathering of reporters.

“I have never seen such a display of vengeful, partisan conspiracy theory behavior from somebody seeking any judgeship,” Whitehouse said.

“The real facts, the real story here has not been told,” Blumenthal added.

Harris added: “This is a failure of this body to do what it has always said it’s about.”

Democratic senators Kamala Harris of California, Mazie Hirono of Hawaii, Sheldon Whitehouse of Rhode Island, Richard Blumenthal of Connecticut and Patrick Leahy of Vermont walked out of the meeting in protest.

Staff for Sen. Cory Booker of New Jersey left the room, signaling he might walk out too. Eventually, two of the Democratic members that walked out, Leahy and Whitehouse, returned to the Dirksen room.

The others – Harris, Hirono, Blumenthal – have not.

Ranking Democratic Sen. Dianne Feinstein seemed to sum up her colleagues’ frustration as she underscored the severity of their task and actions of Republicans on the committee.

“I hoped we would do better and show women that our country, our committee, has in fact changed,” the ranking member said. “This isn’t a political battle for power, as some have said. This is a serious undertaking with serious allegations. While the Republican strategy is no longer attack the victim, it is ignore the victim. The entire country is watching now how we handle these serious allegations.”

Sen. Chuck Grassley, the committee’s chairman, responded to the mostly absent minority during the meeting, asserting, “I regret that my Democratic colleagues again failed to timely bring this relevant information to his attention.”

With the committee closely split between 11 GOP members and 10 Democrats, if one Republican votes “no” or “present” on the recommendation, the nomination won’t have the endorsement of the full committee.

But Kavanaugh could still get a full Senate confirmation by being referred out of the committee without a recommendation, as happened with now-Justice Clarence Thomas.

It’s not clear at this point if all Republicans on the panel will vote to recommend the nomination. But it seems more certain after GOP Arizona Sen. Jeff Flake announced minutes before the meeting is set to begin that he will vote to confirm Kavanaugh.

“After hearing more than 30 hours of testimony from Judge Kavanaugh earlier this month, I was prepared to support his nomination based on his view of the law and his record as a judge,” he said in a statement. “In fact, I commented at the time that had he been nominated in another era, he would have likely received 90+ votes.”

Another, Sen. Lindsey Graham, R-S.C., broke from the GOP’s measured strategy to have prosecutor Rachel Mitchell ask the questions for them, and launched into a tense and indignant five minutes during the hearing on Thursday.

“This is the most unethical sham since I’ve been in politics,” Graham said. “I hope that the American people will see through this charade.”

After the hearing, Graham told Fox News’ Sean Hannity: “I am now more convinced than ever that he didn’t do it, that he’s the right guy to be on the court, and that Ms. Ford has got a problem and destroying Judge Kavanaugh’s life won’t fix her problem.”

Shortly after Thursday’s hearing ended, several Senate moderates — the key votes in the Kavanaugh nomination — met privately in the Capitol.

In the huddle was one Republican member of the Judiciary Committee — Flake along with Sens. Susan Collins, R-Maine; Lisa Murkowski, R-Alaska; and Joe Manchin, D-W.Va. Sources told ABC News that all four members left the conversation still undecided.

All eyes are now on those other key swing votes, including Manchin, who remained undecided as of Friday morning.

Sen. McConnell, when asked if he had the votes to put Kavanaugh on the high court, declined to answer, instead telling reporters on Capitol Hill, “You guys don’t need to follow me. That’s all I’m going to say.”

Friday’s vote will come hours after the American Bar Association, which had earlier given Kavanaugh its highest rating of “well-qualified” for the Supreme Court, sent a letter to the Judiciary Committee calling for the FBI to reopen the background check.

“The American Bar Association urges the United States Senate Judiciary Committee (and, as appropriate, the full Senate) to conduct a confirmation vote on Judge Kavanaugh’s nomination to the Supreme Court of the United States only after an appropriate background check into the allegations made by Professor Ford and others is completed by the Federal Bureau of Investigation,” ABA president Robert Carlson wrote.

The White House is hopeful that Republicans will deliver for the president.

Ford, a California university professor, told a captivated dais of lawmakers at Thursday’s hearing that she is “100 percent” certain her assailant was Kavanaugh.

Asked what is her strongest memory of the incident, she said, “Indelible in the hippocampus is the laughter.”

“The uproarious laughter between the two. And their having fun at my expense … They were laughing with each other,” she said.

Mere hours later, Kavanaugh, sitting in the same seat before the Judiciary Committee, categorically denied the allegation and angrily accused Democrats of smearing his “good name.”

“This is a circus,” he said. “This grotesque, character assassination will dissuade confident and good people of all political persuasions from serving our country, and as we all know in the political system of the early 2000s, what goes around comes around,” Kavanaugh said.

President Donald Trump urged Republicans to head to a vote minutes after the hearing wrapped.

Barring any last-minute developments, Kavanaugh is expected to receive a final Senate floor vote by Tuesday.

Fri Sep 28 , 2018
President Trump is meeting with Chile’s President Sebastian Pinera Friday afternoon at the White House.  The two, the White House says, are expected to discuss a commitment to pro-growth policies, combatting drug cartels, and partnering in energy and cybersecurity. They also plan to discuss Venezuela, after Mr. Trump announced new […] 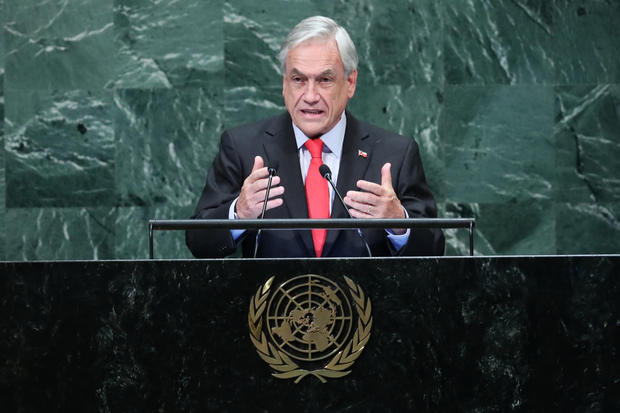