Kanye West delivered a speech supportive of President Donald Trump during the season premiere of Saturday Night Live — who returned the favor on Sunday by applauding his performance.

West, who has come under pressure for his unapologetic backing of Trump, performed two songs on SNL’s 44th season opener, but still had more to say. The notoriously volatile rapper stayed on stage, donning a “Make America Great Again” hat, and delivered a pro-Trump speech.

The politicized rant didn’t make the air, but comedian Chris Rock captured the moment and posted a live video to his Instagram story:

“I want to cry right now, black man in America, supposed to keep what you’re feeling inside right now,” West sang. He continued: “There’s so many times I talk to like a white person about this and they say, ‘How could you like Trump? He’s racist. Well, if I was concerned about racism I would’ve moved out of America a long time ago.”

There was a mixture of booing and cheering from the audience, and West’s performance was widely panned on social media.

However, the embattled rapper did receive at least one high-profile compliment: From Trump himself. Via Twitter, the president said that while he did not watch SNL, he heard West was “great,” and declared him as “leading the pack.”

Later on Sunday, West posted a photo on his Twitter account, wearing the Trump campaign’s signature “Make America Great Again” hat and reciting much of the president’s economic manifesto:

West claimed that he was “bullied” by SNL producers backstage into not wearing MAGA gear on stage. “And then they say I’m in a sunken place,” he said, a reference to the hit horror movie “Get Out,” in which black characters are hypnotized into docile servitude. The phrase “sunken place” has since become a popular catchphrase for marginalization.

Trump and the rapper have been exchanging pleasantries since at least April, when West flattered the president. , “You don’t have to agree with trump but the mob can’t make me not love him. We are both dragon energy,” West said.

Sun Sep 30 , 2018
When Diane Hutchinson watches videos of last year’s horrific mass shooting in Las Vegas, her stomach tightens and she feels like throwing up. Her ears ring and she breaks out in sweat. She starts to cry uncontrollably until she can’t breathe. “I would listen to videos with my eyes closed. […] 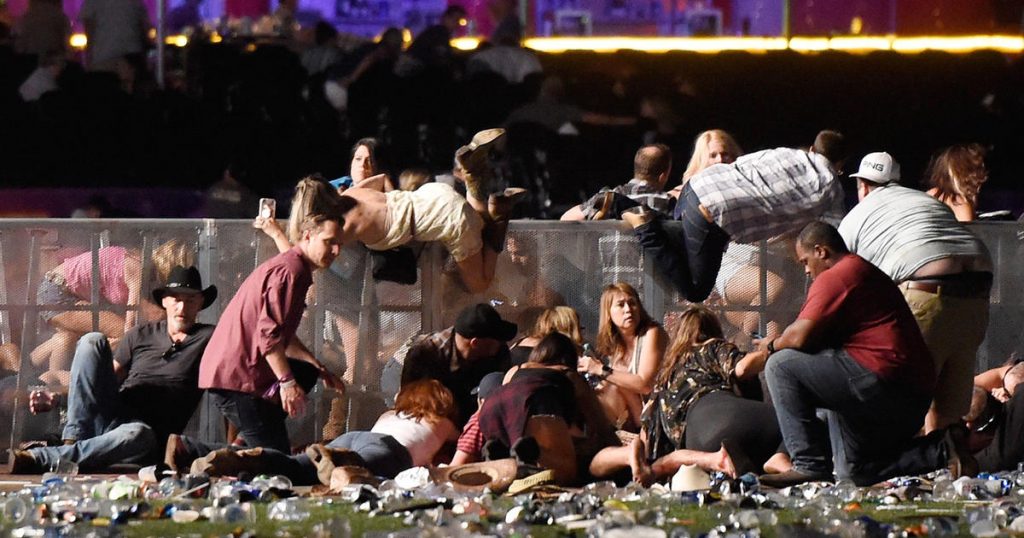