Things got technical at the Supreme Court on Wednesday as the justices heard arguments from Google and Oracle in a blockbuster copyright dispute that has captivated Silicon Valley for a decade.

The dispute concerns about 11,500 lines of code that Google used to build its popular Android mobile operating system, which were replicated from the Java application programming interface developed by Sun Microsystems.

Oracle, which acquired Sun in 2010, sued Google shortly afterward arguing that Google’s use of the code violates its ownership rights. Google, on the other hand, has said the code it copied was purely functional, and that its own engineers authored all of Android’s code that could be said to be creative and subject to copyright protection.

At the end of an hour and a half of arguments, Justice Stephen Breyer, who at one point read aloud some code, seemed to be the only sure vote. The liberal justice appeared to lean toward Google.

Several of the other justices, including Chief Justice John Roberts, suggested they were sympathetic to Oracle’s copyright claims.

Still, they appeared reluctant to rule in Oracle’s favor because of arguments made by leading computer scientists and Microsoft, in friend-of-the-court briefs, that doing so could upend the industry.

Several of the court’s conservatives, including Justices Brett Kavanaugh and Samuel Alito, noted that Google’s allies had warned that the “sky will fall” if Oracle won.

“We are told if we agree with Oracle we will ruin the tech industry in the United States,” Roberts said at one point.

But those comments were also peppered with skepticism. “I’m not aware that the sky has fallen in the last five or six years,” Kavanaugh said, noting that Google had lost its first appeals court battle in the case in 2014.

“I think the judges were really trying to ascertain whether or not that was actually going to be the case,” said Brian Michalek, a partner at the law firm Saul Ewing Arnstein & Lehr, in an interview after arguments wrapped up. “I sensed a little bit of skepticism and a little bit of sensationalism.”

Justice Neil Gorsuch also repeatedly raised questions about whether a lower court that sided with Oracle was sufficiently deferential to a jury’s finding in favor of Google, suggesting the top court could send the case back without a definitive ruling.

Arguments were conducted by telephone and streamed live to the public as a result of the Covid-19 pandemic.

The dueling conceptions of the code at issue fueled much of the legal dispute ahead of arguments. At stake is not just the $9 billion that Oracle has said that it is owed but also the the law of copyright in the internet era, and which types of code will be subject to protection.

Google’s attorney Thomas Goldstein stressed during arguments that the company had written all of the code that could be written differently from the way that Oracle had written it. But, he said, for some purposes “there are no substitutes.”

“The long settled practice of reusing software interfaces is critical to modern software development,” Goldstein argued. “Because there is only one way, there is no copyright protection.”

Oracle’s attorney, Joshua Rosenkranz, countered that Google did have options that did not include using Oracle’s code, albeit expensive ones.

“The Copyright Act does not give Google a pass just because it would be expensive to recreate our expression,” he said.

A key distinction that the justices sought to wrap their heads around was the difference between two different types of code, known as declaring code and implementing code.

Oracle prefers a different analogy, saying that its declaring code is more like the chapter headings and topic sentences of a novel.

For their part, the justices tried out a host of new comparisons.

Roberts, for instance, asked Goldstein if it would be permissible for someone to copy the headings used on his legal briefs if they swapped out rest of the text. Applying a similar brand of skepticism to Rosenkranz, he pointed out that someone opening a restaurant is going to have “appetizers first, and entrees and desserts” on the menu.

“You shouldn’t have to worry about whether that organization is copyrighted,” Roberts said. “Why isn’t that exactly what Google is saying here?”

Breyer seemed to agree with the keyboard analogy, and warned that allowing a copyright would have devastating consequences.

“You didn’t have to have a QWERTY keyboard at the beginning,” he said. “But if you let someone have a copyright on that now they would control all typewriters.”

Google won twice before a district court in California, but both of those decisions were later reversed by the U.S. Court of Appeals for the Federal Circuit. The Supreme Court was scheduled to hear the case last term before it was delayed, along with a set of other cases, as a result of the pandemic.

In a statement after arguments, Oracle’s general counsel Dorian Daley said she was “extremely pleased” with how they went.

Kent Walker, Google’s senior vice president for global affairs, said in a post on Twitter that the “argument confirmed the importance of the legal rules that make that possible, and we look forward to the Court’s decision.”

A decision is expected by the end of June. The case is formally known as Google v. Oracle America, No. 18-956.

Trump has been symptom-free for more than 24 hours, doctor says in new coronavirus memo

Wed Oct 7 , 2020
U.S. President Donald Trump gestures on the Truman Balcony after returning to the White House from Walter Reed National Military Medical Center on October 05, 2020 in Washington, DC. Win McNamee | Getty Images President Donald Trump has been “symptom-free” for more than 24 hours as he continues to be […] 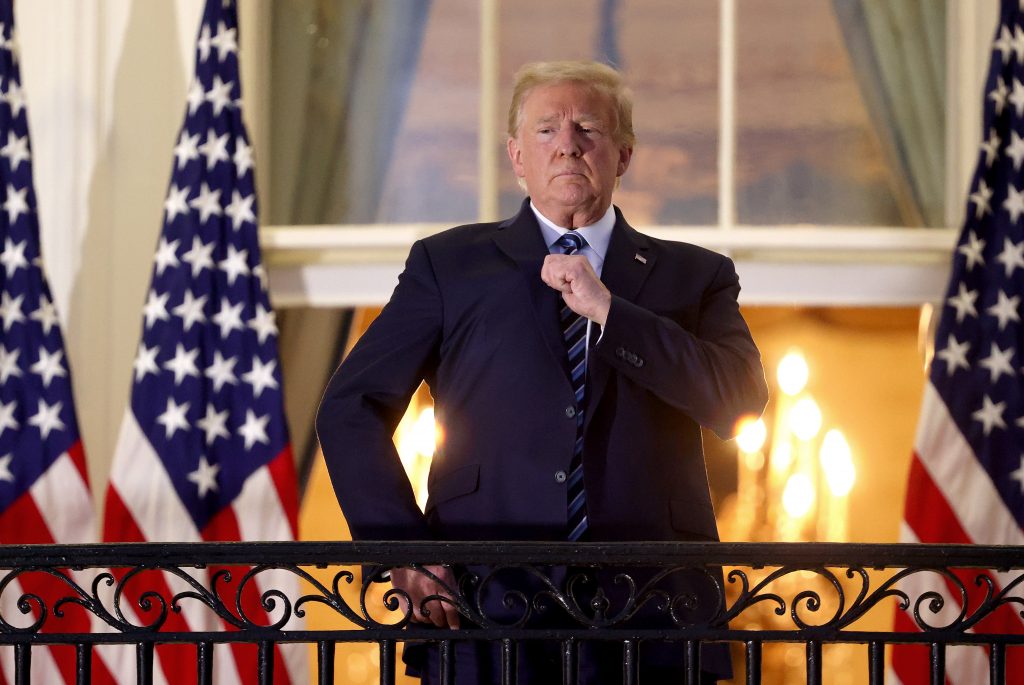