Johnson & Johnson Covid-19 vaccine recipients are better off getting a booster shot from Pfizer or Moderna, a highly anticipated U.S. study suggested Wednesday.

The National Institutes of Health study on “mixing and matching” Covid vaccines included more than 450 adults who have received one of the three regimens currently available in the United States: J&J’s, Moderna’s or Pfizer’s. The study, which looks at whether there are any advantages or drawbacks to using different boosters, hasn’t yet been peer-reviewed.

Volunteers were divided into groups and received an extra shot of their original vaccine or a booster from a different company. Antibody levels were measured two weeks and four weeks after the boosters were given.

All the combinations boosted antibody levels higher, though Pfizer’s and Moderna’s boosters appeared to work best. People who received a booster dose of either the Moderna or Pfizer vaccines had a higher increase in their antibody responses more often than those who received an extra dose of J&J, according to the study.

The study showed recipients of Moderna or Pfizer’s original vaccines could easily swap third doses; the results were about the same. Volunteers who originally received the J&J vaccine appear to have gotten a better immune response if they got a booster made by Pfizer or Moderna.

There were no serious side effects tied to the additional shots and no new symptoms emerged after receiving a booster shot, researchers said. Two participants threw up after their boosters, one received Moderna and the other J&J. Two other people who got a J&J booster reported fatigue or insomnia.

“These data suggest that if a vaccine is approved or authorized as a booster, an immune response will be generated regardless of the primary Covid-19 vaccination regimen,” researchers wrote in the study. “Heterologous prime boost strategies may offer immunological advantages to optimize the breadth and longevity of protection achieved with currently available vaccines,” they added.

J&J’s one-dose vaccine uses an adenovirus, while Pfizer’s and Moderna’s two-dose vaccines use mRNA technology. The thought by scientists is that by “mixing and matching” vaccines that use different platforms, people may be able to get broader protection against the coronavirus and its new variants.

The study is likely to fuel a debate on whether to give additional doses to the millions of Americans who received J&J’s vaccines.

Unlike Pfizer’s and Moderna’s two-shot mRNA vaccines, J&J hoped to offer a one-shot solution that would protect the public enough to help bring an end to the coronavirus pandemic. But its protection at 72% in the U.S. was viewed by some as inferior to Moderna’s and Pfizer’s vaccines, which both touted efficacy rates above 90%.

A second dose of J&J’s shot boasts similar performance to the mRNA vaccines, boosting protection from symptomatic infection to 94% when administered two months after the first dose in the United States, according to company data released Sept. 21.

In a separate document published earlier Wednesday, the FDA said data provided by J&J suggest recipients may benefit from an additional dose given two months after the initial shot.

Regulators wrote estimates on the effectiveness of J&Js single-shot vaccine in trials and real-world studies “are consistently less than the highest effectiveness estimates for the mRNA COVID-19 vaccines.”

The findings published Wednesday are expected to be presented at a key Food and Drug Administration vaccine advisory committee meeting on Friday.

Last month, U.S. regulators authorized Covid booster shots of Pfizer and BioNTech’s vaccine to a wide array of Americans, including the elderly, adults with underlying medical conditions, and those who work or live in high-risk settings like health and grocery workers.

Wed Oct 13 , 2021
Norwegian police say several people have been killed and others injured by a man armed with a bow and arrow near the Norwegian capital, Oslo ByThe Associated Press October 13, 2021, 7:43 PM • 1 min read Share to FacebookShare to TwitterEmail this article STOCKHOLM, Sweden — Several people were […] 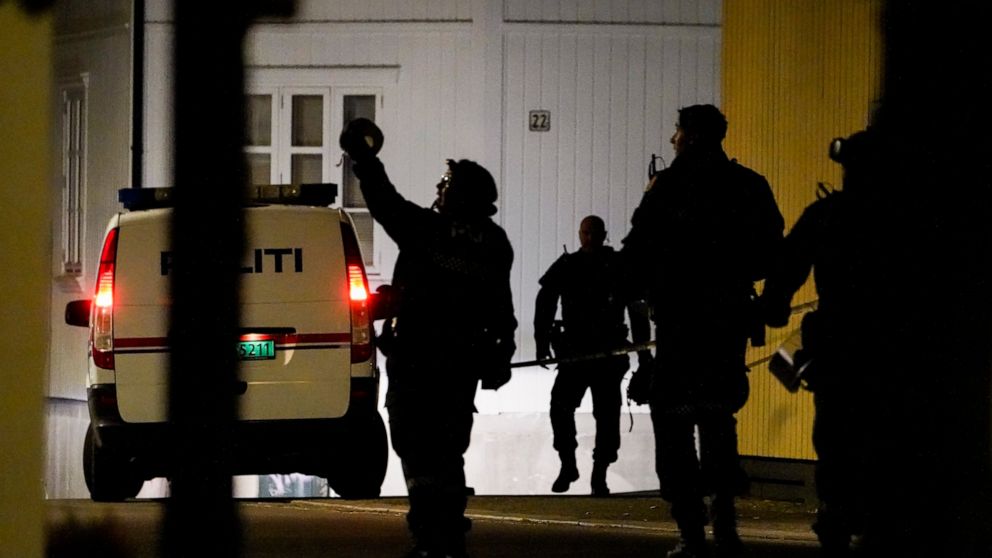