Tel Aviv, Israel — The Israeli government said it had agreed to a cease-fire in its conflict with Hamas late Thursday after 11 days of violence that saw over 200 Palestinians and 12 Israelis killed in the worst fighting in the region in years. The announcement came after a meeting of Israel’s security cabinet.

There had been increasing speculation by Israeli media outlets on Thursday that a cease-fire to end the deadly conflict with Hamas and other armed groups in the Gaza Strip could come within a day. But as the U.S. and others increased pressure on Israel to stop its devastating assault on the Palestinian enclave, the bombing continued, as did the steady stream of rocket fire at Israel.

During a phone call on Wednesday, President Joe Biden told his Israeli counterpart Prime Minister Benjamin Netanyahu that he “expected a significant de-escalation today on the path to a ceasefire.”

But Israeli officials, including Netanyahu himself, made it clear that their military mission was to completely stop the rockets flying out of Gaza by force, and that the mission hadn’t yet been completed.

A senior Hamas official appeared to agree with the more optimistic reports in the Israeli media, however, telling CBS News on Thursday that there was a “positive atmosphere around the talks to reach an agreement with Israel.”

Some 2 million Palestinians live crammed into the tiny, 140-square-mile sliver of land that is the Gaza Strip. It’s one of the most tightly-packed human populations on Earth. Nebraska, for comparison, has a similar population living across its 77,000 square miles.

The misery in Gaza has been unrelenting. Israeli airstrikes have illuminated the skyline for 11 days, causing an inferno of destruction on the ground. The Gaza Health Ministry said on Thursday that the death toll from the bombing campaign had hit 230, with 65 children among the dead.

Israel, meanwhile, said on Thursday that Hamas had fired more than 4,000 rockets since the current violence began. The vast majority of those unpredictable projectiles have been intercepted by Israel’s advanced “Iron Dome” missile defense system, but the ones that slip through have killed 12 Israelis, including two children.

CBS News’ team in the southern Israeli town of Be’er Sheva had to join residents of an apartment building on Wednesday as they ducked into a bomb shelter when sirens blared, warning of another salvo of rockets from Gaza.

A day later, CBS News’ producer in Gaza said new airstrikes had again struck buildings in the north of the territory.

Israel insists it is carrying out precision strikes against militant targets and tunnel networks in Gaza, and that it does everything possible to avoid civilian casualties.

But Hamas officials said on Thursday that more than 100,000 Palestinians had been forced out of their homes by the Israeli strikes in just over a week, as hundreds of residential buildings have been razed or seriously damaged.

Israel blames Hamas for the civilian suffering in Gaza, accusing it of hiding amongst the population in the crowded territory.

If a ceasefire really was near on Thursday, it didn’t feel like it — on either side of the border.

In both Gaza and Israel, it’s children who are suffering the most. The United Nation’s children’s charity UNICEF has warned that one million Palestinian youngsters are facing “disaster” if a ceasefire isn’t called soon.

CBS News spoke to two 10-year-old girls, one Israeli and one Palestinian, about what they’re experiencing.

Nadine Abdel-Taif has become the face of Gaza’s children after her video appeal for peace went viral online. CBS News met Nadine near her neighborhood, which is now in ruins.

“I want to feel safe for one day at least,” she said. “I never feel safe in my own home.”

Just a few miles from Gaza in southern Israel, we met Renana Botzer Swissa, who said it was “very scary” every time Hamas rockets are fired near her home.

She said she knows what she experiences, however, is nothing compared to what Nadine is going through inside Gaza.

We asked the young Israeli what she’d say to Nadine if they were ever to meet.

“I wouldn’t say nothing,” she replied. “I would just hug her, and tell her that I know what she feels.”

Thu May 20 , 2021
U.S. stocks rose on Thursday, rebounding from three straight days of losses as technology shares staged a comeback, while the latest jobless claims totaling a fresh pandemic-era low also boosted sentiment. The S&P 500 gained nearly 1.1% to 4,159.12 with tech being the biggest gainer among 11 sectors. The Nasdaq Composite […] 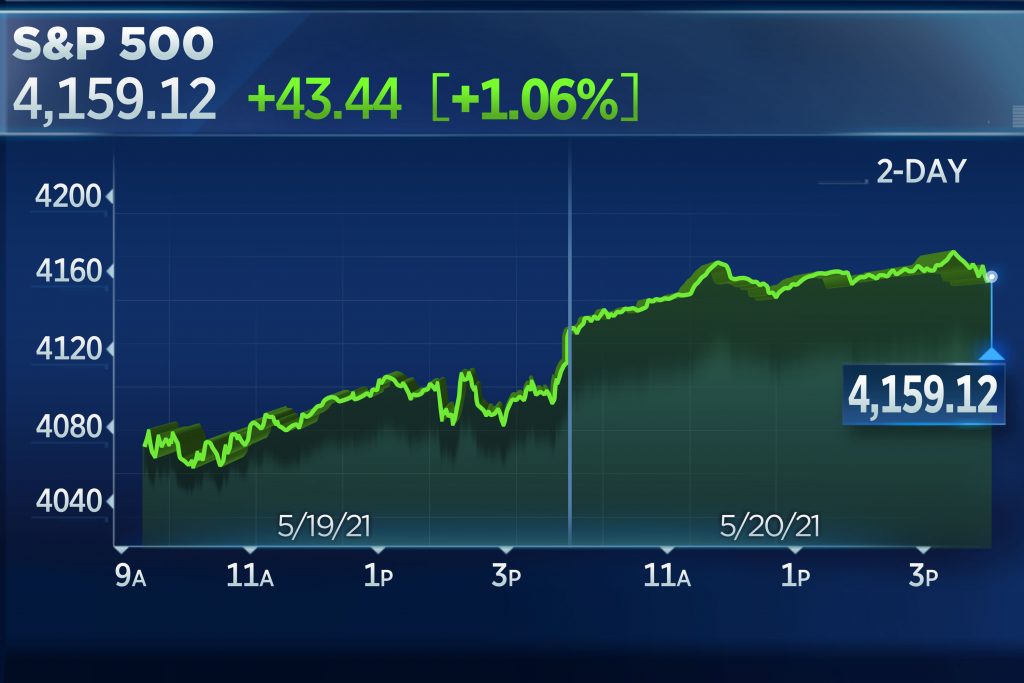