DUBAI (Reuters) – A senior Iranian official said on Saturday the United States had shown flexibility on the licensing of Iranian oil sales and this was a sign that Washington’s “maximum pressure” policy against Tehran had been defeated, state media reported.

French President Emmanuel Macron paved the way at a G7 summit a week ago for a potential diplomatic solution to a confrontation between the United States and Iran brewing since President Donald Trump withdrew Washington last year from world powers’ 2015 nuclear deal with Tehran.

“Macron met with …Trump during the G7 meeting and the U.S. side has shown some flexibility in the licensing of Iranian oil sales,” Iranian Deputy Foreign Minister Abbas Araqchi was quoted by the state news agency IRNA as saying.

“This is a breach in the U.S. maximum pressure policy and a success for Iran’s policy of maximum resistance,” he said.

Araqchi did not elaborate, and there was no immediate French or U.S. comment.

Since ditching the nuclear deal, calling it flawed to Iran’s advantage, Trump has reimposed sanctions to strangle its vital oil trade and force Tehran to accept stricter limits on its nuclear activity, curb its ballistic missile program and end its support for proxy forces around the Middle East.

Araqchi said Iran and its European partners in the nuclear deal faced “difficult and complex” talks towards salvaging the pact. He said Tehran was determined to continue reducing its commitments under the accord until it received protection against sanctions on its oil sales and banking transactions.

Iranian President Hassan Rouhani urged his people on Wednesday ti unite to overcome Washington’s “economic war” while his government said it would use diplomacy to try to solve the standoff even though it distrusted Trump.

Be like water: Hong Kong protesters meander on the march

Sat Aug 31 , 2019
A man covers his eye with a placard as he attends a protest in Hong Kong, China August 30, 2019. REUTERS/Kai Pfaffenbach August 31, 2019 By Jesse Pang and Joe Brock HONG KONG (Reuters) – Thousands marched in a meandering tour of downtown Hong Kong on Saturday in the pouring […] 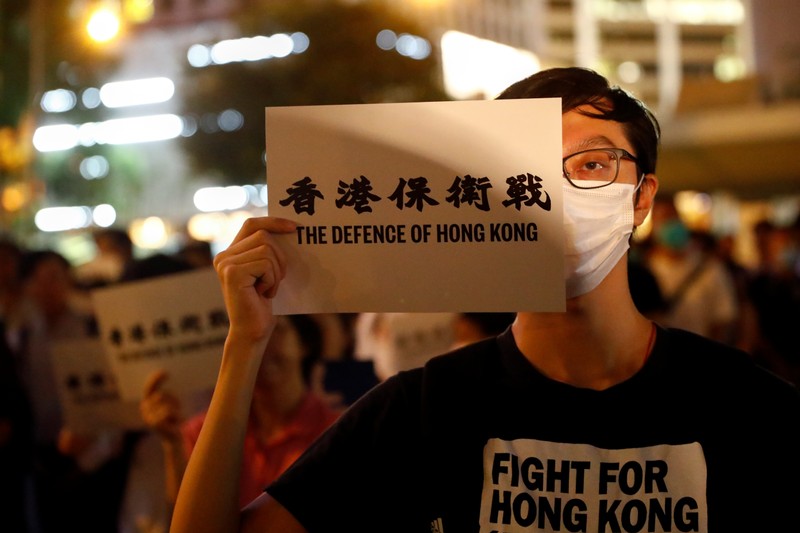