A Senate-approved $1 trillion infrastructure bill would create a voluntary pilot program aimed at studying per-mile user fees for motor vehicles to fund the Highway Trust Fund. The bill does not include a “driving tax,” as some social media posts misleadingly claim.

A bipartisan $1 trillion infrastructure bill supported by President Joe Biden and approved by the Senate would establish a pilot program to test the “financial sustainability” of a national per-mile usage fee for vehicles to finance the Highway Trust Fund, which is now financed with a federal excise tax on fuel.

Under the legislation, the five-year study would be funded to the tune of $25 million annually and involve individuals, companies and states that volunteer to take part. But posts making the rounds on Facebook, including a screen grab from a Newsmax report, misleadingly claim that the bill contains a hidden tax that will require motorists to pay 8 cents a mile for every mile driven.

“Buried in the infrastructure bill is a ~8 cent per mile driving tax,” one post reads. Another post reads, “The dems are trying to push through a 8 cents a mile vehicle tax.”

There is no mention of any specific per-mile amount in the infrastructure bill, which passed the Senate 69-30 on Aug. 10 with 19 Republican votes.

Calling the legislation’s mileage fee study “theoretical,” Brian Peterson, a spokesman for Newsmax, told us in an email, “our report discussed possible scenarios including using an eight-cent-per-gallon figure.”

He referred to an AP story debunking the Newsmax report that noted an 8.1-cent state mileage tax had been considered in a study focusing only on Pennsylvania.

In an emailed statement to FactCheck.org, the U.S. Department of Transportation’s press office said the federal government already funds programs exploring “user-based alternative revenue mechanisms that utilize a user fee structure to maintain the long-term solvency of the Highway Trust Fund.” Those programs were authorized under the Fixing America’s Surface Transportation Act, or FAST Act, in 2015.

One of the states in the FAST Act program is Oregon, which has been operating a pilot mileage usage fee program called OReGO for the past six years.

Under the program, voluntary participants pay 1.8 cents per mile, with owners of fuel-powered vehicles receiving a gas tax credit. About 2,000 drivers participate in the Oregon program.

A Search for Alternative Funding

Rick Geddes, a professor in the department of policy analysis and management at Cornell University and an expert in road pricing, said talk about mileage usage fees has been revving up for the past decade.

With the number of electric, hybrid, alternate fuel and more fuel-efficient vehicles increasing on highways, the federal government and states are faced with falling gas tax collections and are seeking alternative funding streams to replace the taxes to fund highway work.

“State and federal revenues have declined at a faster rate than expected,” Geddes said.

And with the nation seeking to move away from fossil fuels, the need will become more pressing in time, he said.

Geddes said a mileage usage fee is more equitable, noting the owners of electric vehicles now “are using the road but not paying for the use of the road.”

“Technology has come along that breaks the link between fossil fuel and the use of the road,” he said.

“Like a utility bill, where you pay per unit of usage, your [mileage] bill is based on usage,” he said. “This is not a new tax. … It’s been misunderstood that people think this is on top of a gas tax.”

In a tweet, Republican Sen. Mitt Romney, who voted for the bill, emphasized that the bill would create a “VOLUNTARY study to determine how electric cars can support the Highway Trust Fund so the burden isn’t solely on those who pay a gas tax.”

“Since 2008, Congress has sustained highway spending by transferring over $140 billion of general revenues to the fund, including $70 billion in the Fixing America’s Surface Transportation Act in 2015,” according to the Tax Policy Center.

Barbara Rhode, executive director of the Washington, D.C.-based the Mileage-Based User Fee Alliance, which supports research of user fees and counts the AAA, Penske Trucks and state transportation agencies among its members, said we can expect to see pilot projects pop up around the country in the coming years.

“This a long-term process as the United States makes this move,” she told us in an interview. “It could be 20 years before a program is truly set.”

The House has yet to take up the $1 billion infrastructure bill, which includes $548 billion in new spending. The bill has become ensnared in a dispute between liberals and moderates within the Democratic Party over a second, larger $3.5 trillion spending package.

Tax Policy Center. “What is the Highway Trust Fund, and How Is It Financed?” Accessed 8 Oct 2021.

Romney, Mitt [@SenatorRomney]. “Talk of the infrastructure bill allowing the government to track your driving through a VMT is fearmongering and misinformation. It creates a VOLUNTARY study to determine how electric cars can support the Highway Trust Fund so the burden isn’t solely on those who pay a gas tax.” Twitter. 9 Aug 2021.

Wed Oct 13 , 2021
FILE PHOTO: A representation of cryptocurrency Bitcoin is seen in this illustration taken August 6, 2021. REUTERS/Dado Ruvic/Illustration//File Photo October 13, 2021 By Huw Jones LONDON (Reuters) -A collapse in cryptocurrencies is a “plausible scenario” and rules are needed to regulate the fast-growing sector as a “matter of urgency”, Bank […] 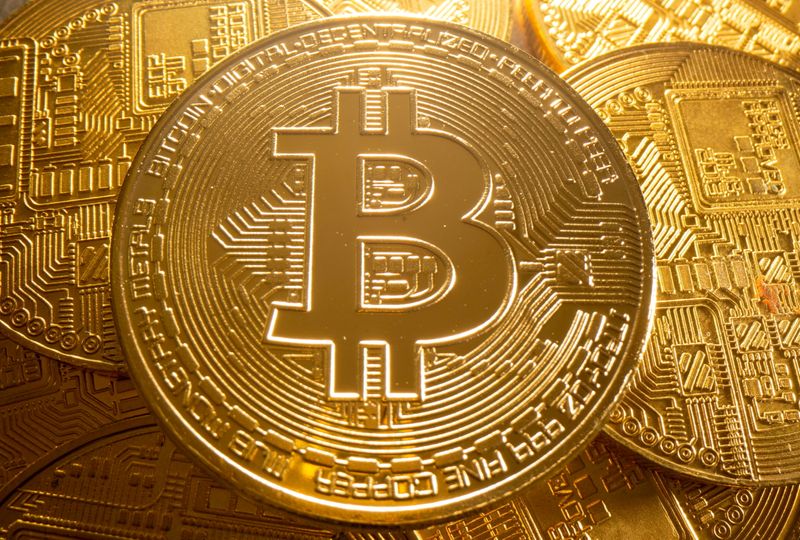