Reserve Bank of India Governor Shaktikanta Das addresses a press conference in Mumbai, India, Thursday, June 6, 2019. India’s central bank has cut its key interest rate by a quarter of a percentage point to 5.75% from 6% with immediate effect to fortify the economy as consumer spending and corporate investment falter. (AP Photo/Rajanish Kakade)

India’s central bank on Thursday cut its key interest rate by a quarter of a percentage point to 5.75% with immediate effect to fortify the economy as consumer spending and corporate investment falter.

The benchmark interest rate is what the Reserve Bank of India charges on lending to commercial banks. In a bimonthly review of the economy, the bank also decided to change the stance of its monetary policy from neutral to accommodative

The central bank noted that inflation remains below its target, even after two earlier rate cuts this year. It also expressed concern over a sharp slowdown in consumer demand and investment.

The central bank’s decision comes ahead of the federal budget, which is due to be announced by Prime Minister Narendra Modi’s government on July 5 after it won by a landslide in recent elections.

Despite recent headwinds, India is the world’s sixth largest and its fastest growing major developing economy. Modi is facing strong pressure to help keep growth robust and create jobs for its 1.35 billion people.

Madan Sabnavi, an economist, said the central bank’s decision was expected, and the shift in monetary policy from neutral to accommodative “meant that an increase in interest rates is off the table.”

Shaktikanta Das, the bank governor, said he wanted commercial banks to provide relief to buyers in housing, automotive and other sectors. India’s real estate sector is grappling with a liquidity crisis along with delayed housing projects and piling up of inventory.

Media reports said that some commercial banks have reduced lending rates only by 5-10 basis points in the past four months against the central bank’s 50-basis point reduction during the same period.

The central bank said retail inflation remained unchanged in April, at its March level of 2.9%, with higher inflation in food and fuel groups offset by lower cost increases in other categories.

It lowered the growth forecast for India’s current fiscal year to 7% due to slowdown in domestic activities and escalation in global trade war. An earlier forecast had put growth at 7.2%. India’s fiscal year runs from April to March.

According to the Central Statistics Office, growth of India’s GDP slowed to a five-year low of 5.8% in the January-March quarter. The economy expanded at a 6.8% pace during the last fiscal year, a five-year low.

Growth in India’s exports flattened to 0.6% in April, down sharply from 11.8% in March this year due to declines in engineering goods, gems and jewelry and leather products, the statement said.

Growth in eight core industries decelerated sharply in April, mainly due to weaker production of coal, crude oil, fertilizers and cement, it said.

Thu Jun 6 , 2019
Image 1 of 2 ▼ An investor reacts as he monitors stock prices at the brokerage house in Beijing Thursday, June 6, 2019. Asian stocks were mixed on Thursday as traders kept a close watch on impending U.S. tariffs on Mexico amid a standstill in its talks with China. (AP […] 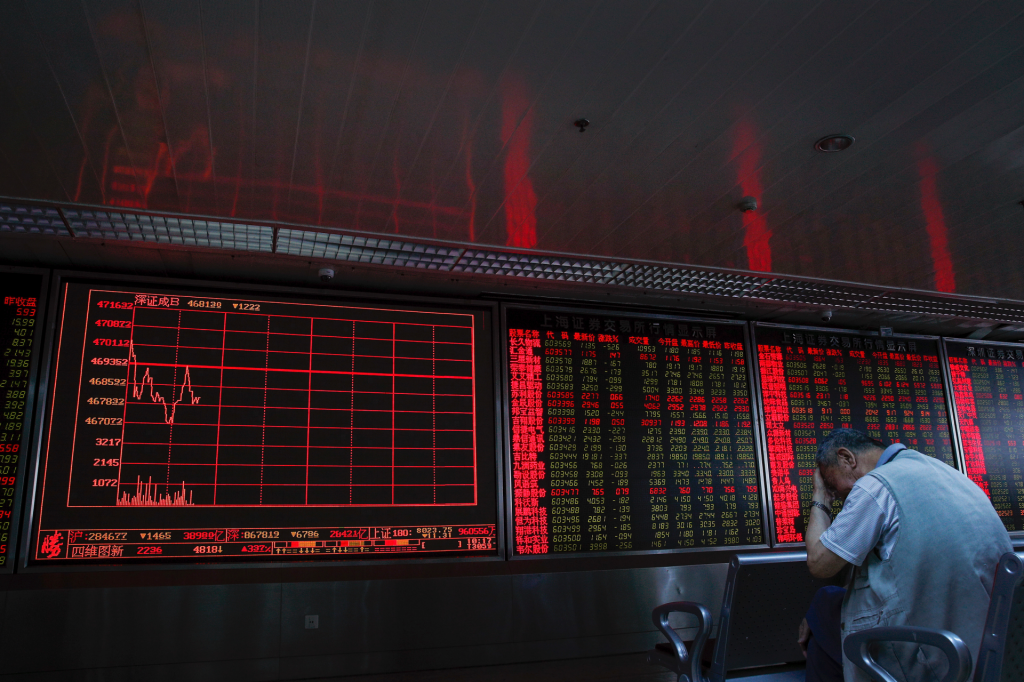