An advertisement containing a jacket with Burberry logo pattern is pictured at a window of a Burberry store in central London, Britain July 12, 2019. REUTERS/Henry Nicholls

PARIS (Reuters) – It has a hotshot new designer known for dressing Beyonce and is experimenting with monthly product launches on social media.

Now Burberry <BRBY.L> is moving past its famed camel check prints with new logo-style branding meant to give its handbags and other wares the kind of covetable cachet top luxury rivals like LVMH’s Louis Vuitton <LVMH.PA> have long enjoyed.

It’s a gamble as fans of the British label digest the unfamiliar monogram – a motif of interlocking “Ts” and “Bs” in a nod to founder Thomas Burberry – splashed onto everything from hoodies to high heels.

But the makeover, part of a bid to revive stagnant sales, also reflects a growing battle among high-end brands to lure young shoppers in markets like Asia, including with instantly recognizable items they can flaunt – leading to a recent proliferation of logo-driven launches by Burberry rivals too.

Burberry’s revamped image is set to get its first real test on Tuesday, with first quarter sales that should reflect the higher proportion of designs by former Givenchy star Riccardo Tisci gradually making their way into stores.

After unveiling his first take on the label last September – including twists on Burberry classics, like trench coats lined with punky rings, more than a third of items in stores should now carry Tisci’s stamp, analysts estimate.

Some are optimistic that comparable revenue growth will improve as a result, from an underwhelming 1% in the previous three months to 3% according to JP Morgan.

Burberry’s new monogram products, which it began pushing in May in a special collection that included $690 bum bags and $400 baseball caps, will likely only account for a tiny part of that.

But the bet is that heightened buzz around the brand linked to the launch – with campaigns featuring model-of-the-moment Gigi Hadid – should have helped spur demand for other items too.

That’s despite a mixed reaction to the design so far, including among Chinese consumers, the luxury industry’s biggest client base, at a time when the Burberry’s growth rates in mainland China have been lagging those of some peers.

“It’s a reversal to the trend of designing to appeal to younger people, the monogram looks just old,” said 22-year-old Kexin Fan, from central China’s Zhengzhou city, who said she tended to buy scarves from Burberry every year.

For others, however, the print – with versions in bolder, orange tones or greens and browns – was younger-looking and jazzier than the traditional camel, black and red check.

“I now go to Burberry more, rather than just going there to shop for parents during Chinese New Year in the old days,” said Shanghai-based Jing Han, 26.

At one of Burberry’s New York stores, interspersed with monogrammed products, shop assistants said the collection had been selling well.

“Strong reactions of any kind are usually a good thing,” one added.

Using trademarks is a minefield for luxury labels, with the risk of damaging or cheapening their image by overdoing it.

Burberry, which under CEO Marco Gobbetti is looking to go more upmarket, had only recently managed to rehabilitate its check print, so widely copied and worn in the early 2000s its sales suffered.

But brands have major incentives to follow this route too, as consumer tastes shift toward more casual clothes – creating a need for trademarks setting apart luxury cotton T-shirts from standard ones.

“There’s great value from a margins standpoint from logos for a brand, the price ratio on a product goes up with a logo on it,” said luxury goods consultant Robert Burke.

Italy’s Salvatore Ferragamo <SFER.MI>, which is also looking to reignite sales growth, is using a new monogram of little C-shaped hooks, or “gancini” in Italian, that feature in metal form on its loafers.

Ferragamo and Burberry may benefit in the short term from a monogram fad, as a revival of shoutier, plain logos over the past three years – sparked by the likes of Kering’s <PRTP.PA> Gucci and Balenciaga as a tongue-in-cheek 1990s throwback – starts to peak.

According to fashion trend forecasting firm WGSN, UK online luxury retailers increased their offer of single-logo items by 15% in the first quarter of 2019, down from 48% growth a year earlier.

“Customers (are) responding well to brands who have started to use logos as a design feature, incorporating them into prints,” said Celenie Seidel, senior womenswear editor at retailer Farfetch.

In the longer run, Burberry is banking on the patterned print to help improve its performance in high-margin leather goods, which make-up 38% of its sales, less than the roughly 60% and 75% at sector champions Gucci and Vuitton. Both have developed recognizable monograms over several decades.

Its bet is that the monogram could be declined into different shades more easily than the camel check, while remaining identifiable. 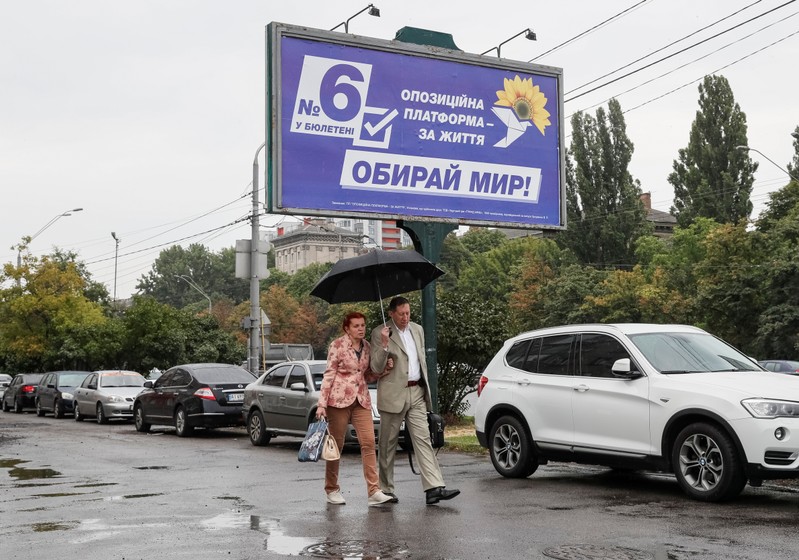