By Trevor Hunnicutt and Jarrett Renshaw

The fourth debate in the race to find a challenger to Trump in the November 2020 election will also match Biden and U.S. Senator Elizabeth Warren for the first time since Warren surged into a virtual tie with the former vice president in many Democratic opinion polls.

The debate marks the return of U.S. Senator Bernie Sanders, 78, the oldest candidate in the field, who suffered a heart attack two weeks ago and has been recuperating at home in Vermont since having stents inserted to open a blocked artery.

The dozen candidates cramming the debate stage in the electoral battleground state of Ohio will make for the most crowded debate so far in the Democratic race.

The 10 candidates who took part in last month’s third debate in Texas all qualified for Tuesday’s event, along with U.S. Representative Tulsi Gabbard and Tom Steyer, a billionaire activist who is making his first debate appearance.

The packed stage and tangle of competing story lines could create a contentious atmosphere, and the Democratic-led congressional impeachment inquiry is likely to be a frequent theme.

The impeachment probe focuses on Trump’s efforts to pressure Ukraine to investigate his unsubstantiated allegation that Biden improperly tried to aid his son Hunter’s business interests in Ukraine. Trump has repeatedly tried to turn the focus on Biden with vociferous attacks on his integrity.

Every Democratic candidate has voiced support for the impeachment inquiry. The debate will be Biden’s first chance to fire back at Trump before a national audience.

It also will give Biden’s rivals a chance to offer their support – or not. They will be closely watched to see how they talk about the issue and whether any of them use it as an opportunity to attack Biden.

Biden has seen his once solid lead in opinion polls in the Democratic race diminished by Warren, a leader of the party’s progressive movement, who has steadily risen over the past two months.

The two candidates have mostly refrained from directly attacking each other. But Warren’s gains could make her more of a target this time, particularly for other contenders who are running out of time to make an impression.

“Warren tends to recede with so many people on the stage and that has been working for her,” said Alan Schroeder, a professor emeritus and debate expert at Northeastern University in Boston. “But the other candidates will have an incentive to try to halt her rise this time.”

Biden recently took a swipe at Warren’s extensive “I have a plan for that” campaign promises, telling a New Hampshire crowd last week: “That’s not enough. It takes proven ability to get things done. We’re not electing a planner.”

Even Sanders, Warren’s friend and progressive ally who has dropped into third place in the polls, signaled he was willing to draw at least some policy distinctions with her.

“There are differences between Elizabeth and myself,” Sanders, a democratic socialist, said on ABC’s “This Week” program on Sunday, highlighting what he said was his more fervent opposition to corporate greed and corruption.

“Elizabeth I think, as you know, has said that she is a capitalist through her bones. I’m not,” Sanders said.

Sanders will be watched closely in the debate for signs of fatigue or weakness after his heart attack, which highlighted his age and that of the other top White House contenders – Biden is 76 and Warren is 70, while Trump is 73 – in a race featuring a debate about a generational change in leadership.

Younger Democratic candidates, including Pete Buttigieg, 37, mayor of South Bend, Indiana, and entrepreneur Andrew Yang, 44, have argued it is time for new leadership in a Democratic Party driven by the diverse, grassroots energy of younger activists.

The Democratic National Committee again will increase the fundraising and polling criteria to qualify for next month’s debate in Georgia. So far, only eight of the 12 candidates participating in Ohio would qualify, according to a CNN analysis. Nineteen contenders remain in the Democratic race overall.

The first Democratic nominating contest in Iowa is scheduled for Feb. 3.

Tue Oct 15 , 2019
Los Angeles — A destructive wildfire that exploded on the edge of Los Angeles began beneath a high-voltage transmission tower owned by Southern California Edison, fire officials said Monday. Los Angeles Fire Department arson investigators determined that the origin of the Saddle Ridge Fire was beneath power lines on a […] 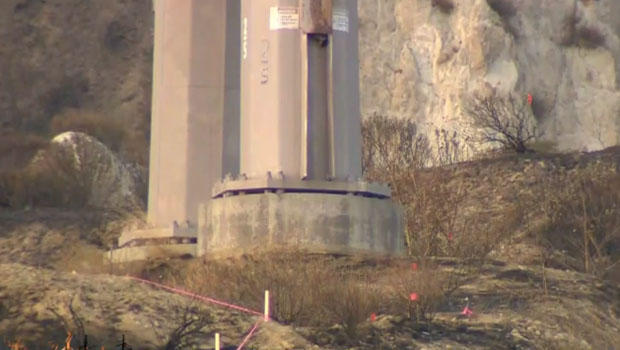