If Democrats sweep the 2020 election, it could have serious consequences for the stock market, according to a Goldman Sachs analyst.

S&P 500 earnings might drop by about 12 percent in 2021 if Democrats secure control of the White House and both chambers of Congress, Timothy Moe, co-head of macro research in Asia at Goldman Sachs, told CNBC.

That’s because a Democrat-controlled government would be almost guaranteed to repeal President Trump’s biggest legislative achievement, the 2017 Tax Cuts and Jobs Act, which dropped the top corporate tax rate to 21 percent from 35 percent and temporarily lowered individual rates.

“That, in turn, could lead to a significant correction in the U.S. markets,” Moe said.

Goldman did not respond to a request for comment from FOX Business. Former Vice President Joe Biden, the frontrunner, has called for a slightly higher corporate tax rate of 28 percent, while South Bend, Indiana, Mayor Pete Buttigieg has suggested the rate should once again be 35 percent.

Massachusetts Sen. Elizabeth Warren would also restore the 35 percent tax rate, but she’d impose a 7 percent profits surcharge on corporations that earn more than $100 million on top of that. Under Vermont independent Sen. Bernie Sanders, the corporate tax rate would be 35 percent, and he has vowed to levy taxes on companies with huge pay disparities between CEOs and their employees.

In a note to clients at the end of November, Goldman analysts wrote that the most likely outcome of the election next November is victories for both Democrats and Republicans — a boon to investors.

Popular 'Dogs of the Dow' investing strategy fails in 2019

Sat Dec 14 , 2019
(This story is part of the Weekend Brief edition of the Evening Brief newsletter. To sign up for CNBC’s Evening Brief, click .) In a year where almost every investment worked, a popular stock-picking strategy disappointed investors. The so-called “Dogs of the Dow,” a classic value investing strategy that simply […] 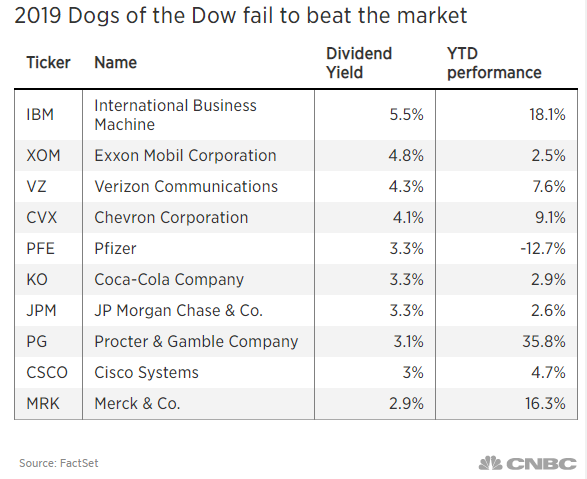