No telling who will win the election, but there is no better place to ask than in Ohio. Since 1896, Ohio has sided with the presidential winner 93% of the time. Ohio hasn’t missed since 1960 and no Republican has ever won the presidency without Ohio. We asked Ohio in 2016 when national polls showed a lead for Hillary Clinton. Back then, Ohio voters told us they saw more excitement for Donald Trump. And he won the state by eight points. But now, in Ohio, he and former Vice President Joe Biden are essentially tied. This past week, we returned to ask Ohio.

You know a president is playing defense when he spends vanishing time in a state he had easily won before.

This was Mr. Trump, last weekend, putting a pre-Halloween scare into Circleville, Ohio.

President Trump at campaign rally: Biden and the Democrats will offshore your jobs, dismantle your police departments, dissolve your borders, confiscate your guns, eliminate your private health care. They want to terminate your religious liberty. They want to destroy the suburbs. I am the best thing that ever happened to the suburbs.

The suburbs are where Mr. Trump is fighting for his political life. They were critical to his victory in 2016. But polls suggest suburbanites are moving away from him. Randy and Cyndra Cole are Republicans, raising four children outside Cleveland.

As they watched the final debate, polls showed Trump leads in men, but Biden leads among women.

Randy Cole: Obviously, the president can be abrasive and confrontational and that’s his style. But now as I’ve seen four years of the president’s record, I do believe the people around him, his policies are those things that I agree with.

Cyndra Cole: I believe that the Republican Party that I joined years ago has left me.

Scott Pelley: And what are those values that you hold dear, that you don’t believe the administration has followed?

Cyndra Cole: There’s such great divide right now in our country, and I think if we could talk about equity– in terms of equality of opportunity, that there would be real solutions offered that both Republicans and Democrats could agree on. And the national debt. The president promised to eliminate the debt. And instead, it’s increased by 36%.

Scott Pelley: What is your impression of the way the president has handled the COVID outbreak?

Cyndra Cole: So we’re trying to not talk about that as a couple. That’s one area that we tend to disagree.

Randy Cole: As I cross my arms.

Cyndra Cole: Yeah, right. I just wish he would have been more transparent from the beginning. To come and look us in the eye and say, “I know this is hard. Getting through this is going to be hard. We have to do this together.”

Randy Cole: But the pandemic itself is a complex situation. And I do think that the president mobilized a task force, he mobilized industry, he’s working with the 50 state governors. I do think it’s unfair that he’s being labeled as causing 220,000 pandemic deaths.

Ohio’s known infections reached an all-time high this past week as voters were going to the polls.

Scott Pelley: You lost someone to COVID.

Tommie Jo Brode: I did. My grandmother. Yeah.

We first met Tommie Jo Brode in 2016. She’s an attorney, a corporate executive. Last time, she was voting Trump and still is.

Scott Pelley: And despite that personal loss, you still believe the president’s done a good job with the disease?

Tommie Jo Brode: I believe that people who pass away do that in God’s time. So, President Trump has a lotta power, but not more than God.

Brode in 2016: “…I trust him to protect this nation and keep my family safe.”

Scott Pelley: How has he done on that score?

Scott Pelley: A-plus? Why do you say so?

Tommie Jo Brode: I think he has kept his promises. I feel more confident in the United States military than I ever have. I have not seen domestic terrorist problems and threats that seemed to be creeping and looming when he took office.

Scott Pelley: Ronald Reagan in 1980 famously asked, “Are you better off than you were four years ago?”

Tommie Jo Brode: Emphatically yes. My 401(k)’s in good shape. That matters to me. Being able to– just to save a little bit of money and have a little bit of extra things in life is important to my family. And with a good economy, we’ve been blessed to do that.

But there is also the curse of the coronavirus recession that came out of left field. Ohio unemployment is over 8%. We took advantage of Akron RubberDucks’s idle ballpark to have a socially distanced visit with workers from an American industrial icon.

Charles Pierce: I think President Trump’s done a great job on trade. Replacing NAFTA with the USMCA was a very, very big thing for America. He’s used his business acumen and negotiating ability to bring a lot of jobs back to America.

Mark Sesock: The one issue that President Trump can’t get from behind is the response to the coronavirus within this country. We have the best health care available to our citizens and I really believe that the leadership of this country failed our citizens in protecting the people.

Dan Gruelle: My number-one issue that I completely support Donald Trump on is his pro-life stance. There’s, to me– that is the most important issue in my life.

Scott Pelley: Bob, what are the most important issues to you in supporting former Vice President Biden?

Bob Schrock: You know, workers’ rights, workers’ protections. My right to join a union and to collectively bargain, to fight for my good health care, for my 40-hour work week, overtime after eight, over 40– holidays, paid time off, vacations, these are things that unions have fought for, for decades.

Ohio manufacturing jobs grew a slight 2% during the president’s term but that growth was wiped out by the pandemic.

The president didn’t help himself in Akron recently, after hearing that Goodyear doesn’t allow political clothing in its shop. He tweeted, “Don’t buy Goodyear tires—they announced a ban on MAGA hats. Get better tires for far less!”

Mark Sesock: I’ve never heard of a sitting president call for a boycott of an American company.

Maybe Mr. Trump didn’t know the Akron plant handcrafts all the tires for NASCAR, one of his constituencies, plus, one other customer.

Mark Sesock: We also make the president’s limo tires. So, I think he underestimates how many jobs are out there, good-paying jobs, to support your family. And I just thought it was irresponsible.

Jawanza Colvin: Some of the things that have come out of this president’s mouth has angered me, my family, our congregation.

Reverend Jawanza Colvin of Cleveland’s Olivet Institutional Baptist Church told us the words of the president inflame division. To Colvin, it’s an opportunity to get out the vote.

Jawanza Colvin: There will be a world after Donald Trump. And we’re voting for that world.

In 2016, Ohio’s African American vote was down six and a half percent. When we first met Lisa Tolbert, back in 2016, she didn’t see enthusiasm for Hillary Clinton.

Lisa Tolbert: I’m gonna pray that they come to the polls. I’m gonna–

Scott Pelley: But you’re not feeling that groundswell.

Lisa Tolbert: I’m not hearing it.

Last week, we found Lisa Tolbert recovering from COVID. But she worries more about her 20-year-old son. For fear of a police stop, she drives him to his night job.

Scott Pelley: I wonder how this election feels to you?

Lisa Tolbert: I know this election is more important. Because we have watched our president, to me, act a plumb fool for four years.

Scott Pelley: Are you voting for Joe Biden or against Donald Trump?

Lisa Tolbert: Mmmm. Is that both? Can it be a both answer?

Scott Pelley: It can be any answer you want it to be.

Lisa Tolbert: It can be both.I’m definitely voting against Donald Trump. But I do believe, more so than I probably thought about Hillary Clinton, I do believe Joe Biden could do the job.

That doesn’t sound like enthusiasm, but Ohio is seeing historic early voting. So far, 2 million have voted, about double the usual. Ron Smetana couldn’t wait for his absentee ballot.

Smetana has a lot in common with his friend, Steve Plogsted. Both are retired Army lieutenant colonels, both life-long Republicans.

Scott Pelley: And what about this year?

Scott Pelley: And why not Donald Trump again?

Steve Plogsted: Don’t trust the man. He’s supposed to be a leader. And he’s a bully.

Scott Pelley: So you’re a Republican who’s already voted for the Biden ticket–

Scott Pelley: There are fellow Republicans in Ohio who would ask, “How could you do that?”

Ron Smetana:  I could not vote for Donald J. Trump. His consistent lies, his handling of COVID, failure to follow science, whether it’s with Anthony Fauci or climate science, I just cannot tolerate.

Tommie Jo Brode: I think a vote for President Trump is a vote for lawfulness.

Tommie Jo Brode told us she has no trouble tolerating the president’s style if that 401(k), and her home, are secure.

Tommie Jo Brode:  I understand that people don’t always like his approach. And that he doesn’t come across as soft. You know, he doesn’t maybe strike us as someone who wants to give out hugs. And I get that. And I want my pastor to give out hugs. It’s not what I’m looking for in my president.

Tommie Jo Brode: I do. I’ve driven all over the state of Ohio. People are enthusiastic. They are very enthusiastic. I think Ohio will not just be red; I think it’ll be bright red.

Scott Pelley: On the Sunday before Election Day, you’re gonna say what to your congregation?

Jawanza Colvin: First, I’ll probably quote a hymn from Amazing Grace, “Through many dangers, toils and snares we’ve already come. It was grace that brought us safe thus far and it’s gonna be grace that leads us home.” But grace without voting? Grace without going to the polls? We’re gonna need a lot more than just grace. We’re gonna need us to take that grace into our hands and into those polls.

This Ohio is not a retread of 2016. Joe Biden is viewed much more favorably than Hillary Clinton. Ohio will come down to this; will African Americans turn out? Can Biden swing enough votes in the suburbs to overcome the president’s big advantage in the countryside? And will Ohio extend its 56-year streak of getting it right?

Where today's GOP fits into Arizona's Republican past

Mon Nov 2 , 2020
Traditionally a Republican stronghold, Arizona has rarely been a state that political analysts consider on Election Day. Aside from 1996, when Bill Clinton won by two percentage points, the Grand Canyon State hasn’t voted for a Democratic presidential candidate since 1948.  But this year, polling indicates Arizona is worth watching.  […] 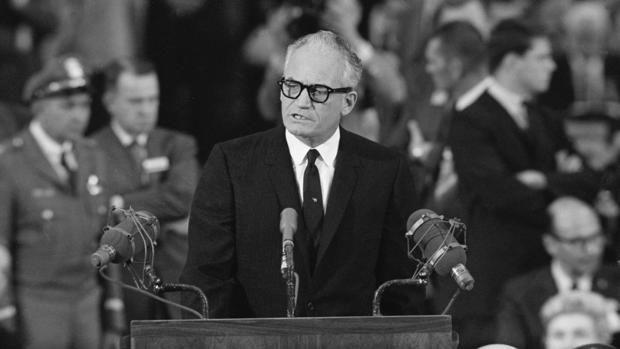