Farmers welcomed an announcement from the White House on Friday saying Phase One of a U.S.-China deal has been reached.

President Trump said during a Friday press briefing that Phase One includes an agreement from China to buy $50 billion worth of U.S. agricultural products, though other sources say the number could be lower at around $32 billion over two years.

Chinese officials are expected to sign the Phase One deal in January.

While optimistic, farmers also say it can’t be a “Phase-One-and-done” deal. U.S.-China trade relations have a long way to go before farmers can recover from what they’ve lost as a result of the nearly two-year-long trade war so far.

“For farmers, this could either be the first ray of hope or another empty promise,” Brian Kuehl, co-executive director of the free-trade organization Farmers for Free Trade, said in a statement. “Farmers want sustained access to China’s market, not one-time purchases, so it will be critical to see how the retaliatory tariffs that have crippled farm exports are treated in this agreement.”

“While any progress is encouraging, this cannot be Phase One and done. The last thing the U.S. and China should do now is step away from the negotiating table or let this go into deep freeze through 2020. Farmers are looking for an end to the trade war, not a pause,” Kuehl added.

“China went from the second-largest market for U.S. agricultural products to the fifth-largest since the trade war began. Reopening the door to trade with China and others is key to helping farmers and ranchers get back on their feet. Farmers would much rather farm for the marketplace and not have to rely on government trade aid, so today’s news is especially welcome,” Duvall said in a statement to FOX Business. FILE – In this May 23, 2019, file photo, a farmer plants soybeans in a field in Springfield, Neb. China’s government says importers have agreed to buy American soybeans and pork. (AP Photo/Nati Harnik, File) (AP)

“We are eager to learn the details of China’s commitment to purchase more agricultural products. American agriculture has been caught in the trade war crosshairs and it’s time to turn the page,” Duvall added.

Kuehl told FOX Business that while farmers welcome any kind of step toward a trade agreement with open arms after suffering for the past two years, the agreement from China to purchase $50 billion in U.S. agricultural goods in exchange for decreased tariffs has to materialize before farmers start to feel a positive impact of Phase One.

“Any sign of a thaw … is something we applaud, and we encourage the parties to keep working on a solution,” Kuehl said. “The Trump administration has previously mentioned agricultural purchases that have not materialized.”

The office of the U.S. Trade Representative and the U.S. Department of Agriculture Farm Service Agency did not respond to FOX Business’ request for comment.

Trump initially mentioned an agreement from China to buy $40 to $50 billion worth of agricultural products after talks in October, saying, “I suggest farmers have to go and immediately buy more land and get bigger tractors. They will be available at John Deere and a lot of other great distributors.”

The second phase of the deal would start almost immediately after Phase One is signed, Trump had said. But Kuehl remained skeptical.

“We’ll believe it when we see it,” Kuehl said. Even then, a $50 billion agreement wouldn’t make up for everything farmers have lost within the last two years because China was buying about $24 billion in agricultural goods before the trade war began in 2017, he said. In this Jan. 23, 2017, photo, farmer Joe Buley pulls a weed from a bed of spinach growing in a high tunnel greenhouse at Screamin’ Ridge Farm in Montpelier, Vt. (AP Photo/Lisa Rathke)

During the past twenty-two months, farmers have experienced an increase in suicide rates, a loss of farmland and bankruptcy. Commodity prices have been pushed down and input prices have been pushed up, meaning farmers aren’t earning enough money to pay for the supplies they need to manage their farms, creating overall poor conditions for the U.S. farm economy, Kuehl explained.

“That’s the story of rural America,” he said. “Rural America is really suffering.”

Kuehl did mention the Trump administration’s success in its recent passage of the U.S.-Mexico-Canada Agreement, which is an updated version of NAFTA that will ease trade tensions between the three neighboring countries.

“If we can get Mexico and Canada stabilized, can we get China stabilized?” Kuehl asked.

In order for farmers who voted for Trump in 2016 to vote for him again in 2020, farmers need to see concrete details of a trade deal and start feeling the results of more purchases from China. He added, that no matter who is elected in 2020, “trade shouldn’t be partisan. Trade is business, and everybody should want strong, global trade.” Farmers want lower tariffs and a free market, and whichever candidate can make those promises will likely win their votes.

Sergeant told to tone down 'gayness' gets new role

Fri Dec 13 , 2019
A gay St. Louis County police sergeant who was awarded nearly $20 million in a discrimination lawsuit has been promoted to lieutenant and picked as the leader of a newly created diversity and inclusion unit By The Associated Press December 13, 2019, 3:04 PM 2 min read CLAYTON, Mo. — […] 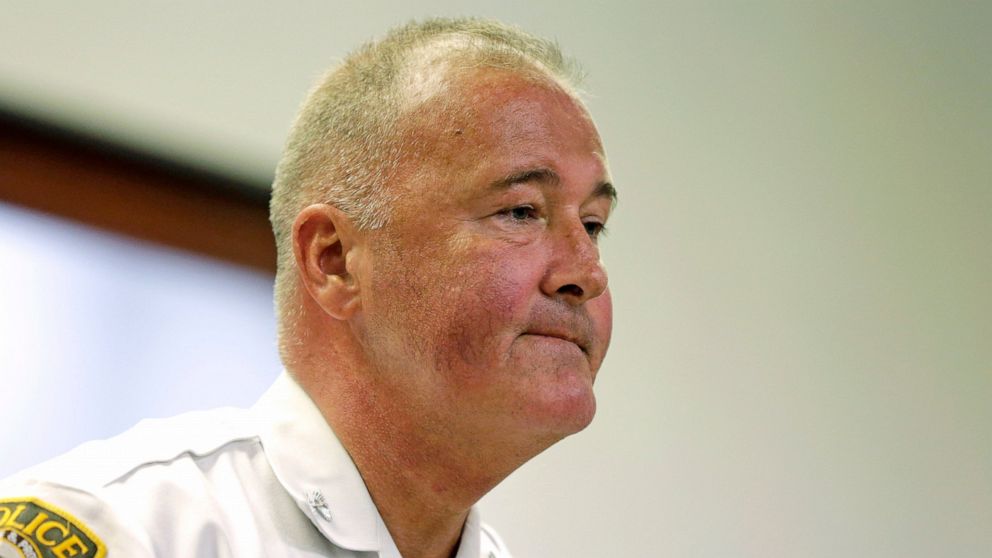