More than 15,000 of our family members, friends and neighbors fell to the coronavirus this past week. So we could almost hear a national sigh of relief when the pharmaceutical company, Pfizer, started delivering the first doses of its vaccine across the country. Pfizer, a frequent advertiser on this broadcast, and its German partner, BioNTech, were the only major vaccine developers to refuse federal money for research and development, yet they were the first to get emergency use authorization from the FDA. Friday the biotech company, Moderna, was granted authorization too. Under Operation Warp Speed, the federal government set a target of 20 million inoculations by the end of the year. But that goal might be ambitious; the vaccine’s rollout has been rocky. Still, for the first time since the pandemic hit there appears to be an end in sight, thanks to a revolutionary advance in biotechnology.

Bill Whitaker: This is a worldwide pandemic, the worst in– a century. A vaccine with this technology had never gone to market before. That’s a big bet you made that this would work.

Kathrin Jansen: Yeah, I didn’t see it as much– maybe as a bet because we are scientists. That’s what we do for a l– living, every day. We discover new things. Everything is new.

Kathrin Jansen is head of vaccine research and development for Pfizer. Based in New York, it’s one of the largest pharmaceutical companies in the world. Jansen, who developed an interest in science as a child in Germany, grew up to develop vaccines for pneumonia and the HPV virus. So, when she first heard of the novel coronavirus, her thoughts turned immediately to a vaccine.

Bill Whitaker: When you were starting off on this mission, New York was on fire with this virus.

Kathrin Jansen: Yeah. We were living in a hot zone in New York. And we saw firsthand what was happening– every day. And Bill, the most chilling thing for me was when we walked our dog. And you see one refrigerated truck after the other appearing in the parking lots in front of the hospitals.

Kathrin Jansen: Morgues, right. That was absolutely fueling the desire to come up with a vaccine no matter what it takes.

Bill Whitaker: This was kind of personal?

Kathrin Jansen: I took this very personally. I wanted to fight it, beat it, fight it down. It was– nothing else mattered.

Across the Atlantic, in Mainz, Germany doctors Ugur Sahin and Ozlem Tureci were also focused on fighting the coronavirus. Founders of a cutting-edge biotechnology company called BioNTech, they had been collaborating with Pfizer on a flu vaccine when Sahin read an article – on January 24 – about a mysterious disease in Wuhan, China.

Dr. Ozlem Tureci: We started to think about– how to implement– a vaccine development program from scratch basically, and so we had to pivot the entire company.

Bill Whitaker: Did you have any doubts about doing that?

Dr. Ugur Sahin: I did not have doubts. The only thing that concerned me is that we might be too late.

The married couple’s company, BioNTech, is doing pioneering work on vaccines made with mRNA – molecules in our cells that pass genetic instructions from our DNA to particles that make proteins, the building blocks of life.

Dr. Ugur Sahin: We felt responsibility to start to develop a vaccine, because we knew the potency of our technology.

Manipulating mRNA molecules in the lab to fight disease has been considered promising technology for more than 30 years, but it has never produced a proven vaccine. With the coronavirus spreading through Europe, Sahin and Tureci redoubled their efforts. By February BioNTech had produced 20 different versions of mRNA that triggered immune responses in mice and monkeys. Sahin knew his small company would need help taking its research beyond the lab, so he picked up the phone and called his friend at Pfizer, Kathrin Jansen.

Dr. Ugur Sahin: And she said, “Ugur, why are you calling me?” And I said, “Kathrin, we started to make a vaccine against COVID-19. I wanted to ask you if you think that Pfizer would join us.” And she said, “Of course, Ugur, actually I wanted to call you, because we are also interested to develop a vaccine, and it will become our most important project.”

It became more like an obsession for Pfizer’s CEO, Albert Bourla…

Albert Bourla: What I was thinking was if– if– not us, then who? We are having a lot of experience with vaccines. We have a lot of manufacturing capability with vaccines. I went and I said, “We need to do something to see if we can help in developing a medical solution.”

Since March he had been pressing Pfizer scientists to develop a vaccine quickly. He set an October deadline.

Albert Bourla: Then– of course, I gave them also some tools in their hands. I told them that they should think, this is not business as usual. There is no consideration of return on investments. This is considered w– to have an open checkbook, that right–

Bill Whitaker: Did you have any idea how much you’d be willing to spend?

Albert Bourla: Will cost us around $2 billion. And I knew that– if we fail, and to have to write it off, is going to be very painful. But it will not take Pfizer down.

Kathrin Jansen convinced her boss, Albert Bourla, that mRNA technology had the best chance of meeting his tight deadline. From her work with BioNTech on a flu vaccine, she was convinced mRNA was on the cusp of a breakthrough. So Pfizer CEO Bourla signed off on the partnership, and rolled the dice on the experimental technology.

Bill Whitaker: There was a big chance that you might not succeed.

Unlike old-school vaccines made with real virus often grown slowly in eggs, these mRNA molecules are produced rapidly in a lab, programmed with a bit of the virus’ genetic code. We’ve all seen pictures of the coronavirus with its crown of spike proteins. The mRNA vaccine instructs your healthy cells to make replicas of the spikes. They can’t make you sick but they do teach the immune system what the virus looks like. If the real virus shows up, your immune system antibodies will attack.

By May, Pfizer was ready to start testing the vaccine at different sites in the U.S.

Dr. Mark Mulligan: And I raised my hand and said yes.

Dr. Mark Mulligan: I’ve worked on HIV/AIDS vaccines, Zika, Ebola– flu pandemic vaccines. So this is really the moment for us to jump in and say, “Okay, let’s do it. Let’s try to be part of the solution.”

Almost 44,000 people around the world volunteered for the phased, double blind trials, testing the vaccines against a placebo – most were between the ages of 16 and 85. Researchers faced some skepticism when they reached out for African American and Hispanic volunteers.

Bill Whitaker: Were these communities well represented in the trials?

Dr. Mark Mulligan: I feel that they were. If you add the Hispanic population and the African American Black population and the indigenous American population, it came in at just under 40%. We would like to have done a little better, particularly with African Americans. We were just under 10%. But I think overall, it’s good and we’ve had several town halls with community partners in Harlem. It’s important for us to be able to say, “Yes. That we tested it in your community. Yes, it was equally tolerated, safe, and equally protective.

Normally phased trials run sequentially. To speed up the process, the FDA allowed these trials to run simultaneously.  Dr. Mulligan told us he had never seen it done so quickly.

Bill Whitaker: What do you say to people who worry that that was too fast, that this is being rushed to market?

Dr. Mark Mulligan: Given the– the huge public health emergency that we’re in internationally, it was appropriate that all speed be used. I’ve done vaccine trials for 30 years, and I– I promise no corners have been cut on the usual safety evaluations.

Volunteers’ blood samples were brought to this Pfizer facility in Pearl River, New York, where these robots ran day and night helping to analyze the effectiveness of the vaccine. They’ll continue collecting and analyzing samples for two years.

Kathrin Jansen: These robots have taken care of probably about over 180,000 tests.

When the critical third phase results were revealed last month, Kathrin Jansen was taking a break in the country with her husband. She got a call from Pfizer CEO, Albert Bourla.

Kathrin Jansen: And I said, “What’s up, Albert?” He said, “Well, Kathrin, we spoke to the FDA, we can say the vaccine is over 90% efficacious.” And I said, “What? (LAUGH) That is fantastic.” So my husband and I, he was standing right next to me, we– we are jumping up and down.

Bill Whitaker: Can we all just say goodbye to our masks?

Dr. Mark Mulligan: I’m afraid not. We aren’t sure yet that the vaccines will prevent asymptomatic infection. The vaccine isn’t probably going to make a difference for this current surge that we’re in.

Bill Whitaker: We’re still gonna be going through this for a while.

Dr. Mark Mulligan: Absolutely. This won’t be like a light switch that’s on/off, but rather like those dimmer switches that we slowly turn up to bring up the lights. 5%, 10%, 20% 50% of people getting vaccinated over months. But to end the pandemic in 2021, we need to get probably 75% of people vaccinated and then we can stop the pandemic.

There still are a number of unknowns about this vaccine: how long does it last; are there long-term safety issues, why a few people have had severe allergic reactions? It still needs to be tested on young children and pregnant women. But the most pressing issue: the bumpy rollout. The development of the vaccine was rapid, but so far, the distribution has been anything but. Pfizer cut the projected number of doses for 2020 by more than 50%, citing a shortage of raw materials. States are complaining they’re not getting clear guidance from the federal government’s Operation Warp Speed about what they’re getting and when. At the moment, the light at the end of the tunnel is still faint.

This past week when the U.S. death toll from the pandemic hit 300,000, the bells at the National Cathedral in Washington, D.C. rang 300 times – once for every thousand Americans killed by the virus.

Bill Whitaker: This vaccine has been called a miracle. How would you describe it?

Kathrin Jansen: We can call it a miracle. But a miracle always has a sense of it just happened. It didn’t just happen. Right? It was something that was deliberate. It was with passion, done with passion. It was urgency. It was always having in your sight that devastating disease.

Organization teaching prisoners in Africa how to defend themselves in court

Mon Dec 21 , 2020
Over the years we’ve done a number of stories about wrongly convicted prisoners who get exonerated when a crusading attorney takes on their case. In prisons around the world, however, that rarely happens. In Kenya, for example, more than 80% of prisoners have never been represented by a lawyer. Justice […] 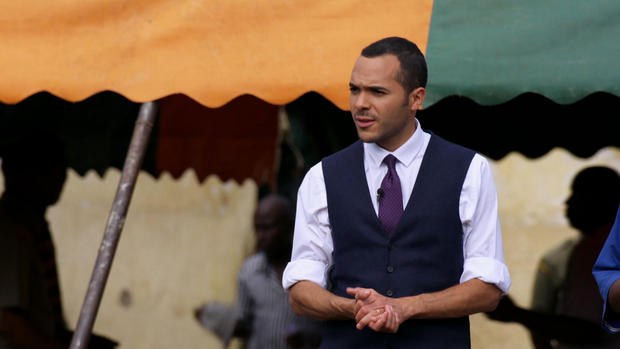