Hong Kong’s economy will likely “remain weak” for the rest of this year, economists and trade experts told CNBC on Friday.

“They’re getting hit on two fronts. The protests are impacting retail sales. It is impacting tourism. Added to that, of course, you’ve got the U.S.-China trade war, which is impacting exports. So, we’re expecting that it is unlikely that we’re going to see a positive growth in Q4. We’re going to see further contraction,” said Sian Fenner, lead Asia economist at Oxford Economics.

The Asian financial hub slid into a recession for the first time in a decade in the third quarter, according to government data published Thursday. The city’s statistics agency said domestic consumption weakened amid ongoing anti-government protests. It also cited the protracted U.S.-China trade war as another factor, as Hong Kong reported “an enlarged decline” in exports.

Billy Wong, deputy director of research at the Hong Kong Trade Development Council said that Hong Kong’s negative growth did not exactly come as a surprise.

“The number is not that happy, but I wouldn’t say it’s really a surprise. I think it was really expected for Hong Kong to facing economic downturn,” said Wong.

He agreed that the trade war and protests are the main factors contributing to the contraction in Hong Kong’s economy. Wong noted, however, that while exports have slowed since last November, the city’s GDP didn’t contract until the third quarter of this year. When asked, he agreed that weak consumption and a slowing economy could lead to layoffs in sectors like dining and retail.

But one industry has seen some positive growth, Wong said. As people avoid the streets, supermarkets benefit as people buy more home necessities, he said.

Hong Kong may report negative growth this year as the economy reels from more than four months of social unrest, Financial Secretary Paul Chan wrote in a blog post.

Local businesses told CNBC they are certainly feeling the financial impact of domestic unrest. Even shops in the normally bustling Wan Chai district are getting hit.

Kitty Chan, who works at her parent’s flower shop, said she’s noticed that far fewer people are buying bouquets for functions. She estimated that profits have dropped 50% for the shop, which she said had been in the district for 51 years.

Andy Ho, who works at a pharmacy in Wan Chai, gave similarly grim figures: “Our store has been here for 50 years. Our business has really declined in recent months — close to 40%.”

He said as long as the social unrest remains unresolved, the economy “will remain weak.”

“For our store, 70% of our customers are local and 30% are tourists. Among the 30% tourists, 80% of them have disappeared. As for locals, in the recent months, people are really less willing to spend … the economy in the next few months will still be weak,” said Ho.

Hong Kong — a former British colony returned to Chinese rule in 1997 — has been crippled by widespread demonstrations since early June. Reuters reported on Thursday, local police used tear gas to disperse hundreds of protesters, many dressed in black and wearing now-banned face masks, mixed in with people dressed up for Halloween in the city.

Oxford Economics’ Fenner said the biggest uncertainty for the city right now is when the protests will end, and “until that stops” key domestic drivers like retail and tourism will struggle to grow.

Ho said “the problem needs to be solved by the one who created it,” referring to the younger generation on the streets protesting. He suggested that the real solution may be better communications between the local government and the young protesters.

In a Friday note, Bank of America Merill Lynch wrote that Hong Kong may be facing a “prolonged recession” and lowered its full-year GDP forecast to a 2.1% year-over-year decline. Its previous 2019 GDP forecast projected a more muted decline of 0.1%.

“Hong Kong is particularly vulnerable to external demand weakness, given its reliance on tourism and dependence on the Chinese economy. Many sectors (tourism, retail, hotel, catering and transportation) have already taken a blow from the months of disruptions to business. Not to mention that high level of uncertainty also significantly impaired business confidence and suppressed investment demand,” the bank wrote.

The U.S. and China were set to meet in Chile to sign “phase one” of the trade deal. But President Donald Trump announced that the trip was cancelled on Thursday due to protests in the South American nation, adding that “the new location will be announced soon” for the two leaders’ signing.

While Oxford Economics’ Fenner said “phase one” will likely “go ahead,” this does not mean the trade war is done. She said that there will most likely be more “flip flopping” moving ahead but probably no more escalations in terms of tariffs.

“But the damage has already been done. We’ve got tariffs now, that 18 months ago on average about 3%. They’re now over 20%. And we’re not looking for those tariffs being removed anytime soon,” said Fenner.

With no end in sight for either the protests or trade tensions between China and the U.S., HKTDC’s Wong said, “for the rest of this year, things will remain weak.”

But Wong is hopeful that maybe as China and the U.S. both see a slowdown in their economies, they will be more inclined to strike a deal, and thus relieving some trade pressure for Hong Kong.

Fri Nov 1 , 2019
The U.S. dollar index could fall to as low as 85 as the Federal Reserve grows its balance sheet again by purchasing more bond assets, a Citi strategist said Thursday. “Our latest projections are that it would weaken even further — maybe to the high 80s, perhaps even as low […] 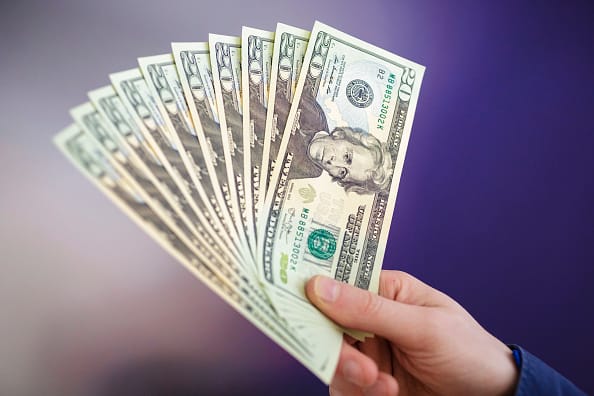