If the 2020 Democratic nominee were determined solely by celebrity endorsements, Sen. Bernie Sanders would be the party’s front-runner today.

The independent from Vermont leads the Democratic field when it comes to celebrity endorsements, having won the support of megastars Cardi B and Ariana Grande. “Avengers” star Mark Ruffalo announced his support for the candidate in December.

Entrepreneur and political novice Andrew Yang would be the runner-up, with endorsements from comedian Dave Chappelle and Tesla titan Elon Musk, among others.

Endorsements — public declarations of support — can frequently help candidates whip up enthusiasm from different demographics. Celebrities can offer help for their chosen contestant in the form of fundraisers, appearances at rallies and social media posts.

Here are some of the 2020 candidates’ biggest celebrity endorsements:

The former vice president and current front-runner has won the backing of “Game of Thrones” creator George R. R. Martin, who said in his personal blog that “the speech he gave announcing his run was kickass.”

“The main things I want in a nominee, however, are twofold: (1) someone who can beat Trump, and (2) someone who would actually be a good/ great president,” Martin said. “Biden qualifies on both counts.”

“I am extremely happy that Joe Biden has decided to enter the race,” Avenatti wrote on Twitter in April. “He offers Dems the very best chance in 2020, especially in key states. He has the fight, intelligence and fortitude to beat Trump and begin to make America, America again. He has my enthusiastic support.”

Actor and director Rob Reiner endorsed Biden in April, saying that Biden can “restore our soul & standing as leader of the free world.”

Actor Vivica A. Fox also endorsed the former vice president, saying in an interview that Biden’s “got ‘that thing.’ He has that history, and he’s been there.”

Though Biden is light on celebrity endorsements, he’s in the lead with endorsements from current and former politicians.

Biden also leads in most national polls, with an average of 28.1% voter support, according to RealClearPolitics.

Judge Judy, appearing in a campaign ad paid for by Bloomberg, said the former New York City mayor “has done amazing things and will be a truly great president.”

“No one comes close to Mike Bloomberg’s executive achievement, government experience, and impactful philanthropy,” Judge Judy, whose real name is Judith Sheindlin, said in the ad.

Since launching his campaign in November, Bloomberg has spent $248 million on advertisements, far outpacing the amount spent by every Democratic candidate in the history of U.S. presidential elections.

Bloomberg does not accept donations and has not qualified for a single debate. He is polling at around 7.4% nationally, according to RealClearPolitics.

Actor Mandy Moore showed her support for the former South Bend, Indiana, mayor backstage at the last Democratic debate. The “This Is Us” star has also been hosting virtual fundraisers for the candidate.

Actor Gwyneth Paltrow invited a crowd of 100 people, including some celebrities and former U.S. ambassadors, to an event in support of Buttigieg at her home in May. Tickets went for $250 per head.

Takei, in a video announcing his endorsement, said while he’d ultimately support any of the Democratic candidates, he prefers Buttigieg because he is “guided by his outstanding character, integrity, and intelligence. Pete has a calm eloquence about him, which I know to be the hallmark of a great leader, and again, which is sorely lacking today.”

Buttigieg is currently polling at 7.7%, according to a RealClearPolitics average, well off his highs. He has qualified for the next Democratic debate.

The senator from Vermont has more than a dozen celebrity names on his side.

On Wednesday, the campaign announced that Vampire Weekend and Bon Iver will perform in upcoming rallies in Iowa to build support for the candidate.

“I believe, unequivocally, that all people deserve support, love, and the freedom to choose how to live their own lives,” Bon Iver’s Justin Vernon said in a statement. “There are promises in our constitutional language that are being superseded by money and greed in this country; I believe that Senator Sanders is the only one that has the pedigree, the experience, the courage, and the undying spirit to begin to put these obstacles of freedom to rest.”

Brian Robert Jones and Ezra Koenig of Vampire Weekend perform on day 3 of Lollapalooza at Grant Park on August 4, 2018 in Chicago, Illinois.

Other celebrities in support of Sanders include artists Cardi B and Ariana Grande. Cardi B has previously encouraged her fans to “vote for Daddy Bernie” when he ran in the 2016 presidential election.

Movie stars are among Sanders’ biggest supporters, with actors John Cusack and Mark Ruffalo and filmmaker Michael Moore pushing for the candidate.

Jeopardy champion Ken Jennings endorsed both Sanders and Sen. Elizabeth Warren seemingly in an effort to get the two left-wing candidates to make up after a tense January debate night.

“Remember, defending champion Ken Jennings wants you to vote for Bernie Sanders or Elizabeth Warren,” Jennings said in response to a tweet from the Bloomberg 2020 campaign referencing him.

Sanders, a prodigious fundraiser, has been rising in national polls in the past few weeks, nipping at the heels of Biden.

Soccer star Megan Rapinoe posted on Twitter last month a phone call she had with the Democratic senator from Massachusetts.

“I just don’t think we can get to a better place by walking this moderate line so I appreciate you being out front and being big and bold with that,” Rapinoe told Warren in the phone call.

Megan Rapinoe of the U.S. celebrates scoring their first goal on June 28, 2019.

Warren, along with Sen. Amy Klobuchar, most recently received a duel endorsement from The New York Times. Warren has slipped in national polls, coming in at 15%, according to RealClearPolitics. That puts her behind Sanders and Biden. Klobuchar’s support from voters averages about 3.6%.

The two leading women in the 2020 election have qualified for the upcoming Democratic debate.

After comedian Dave Chappelle gave a full-throated endorsement for Yang, he announced he’d have two shows to support the entrepreneur. The two shows will be performed on Jan. 29 and Jan. 30 in South Carolina, ahead of the state’s Feb. 29 primary.

Chappelle is not the only comedian backing Yang. Comedian and “Community” actor Ken Jeong endorsed the candidate, saying, “I love Andrew Yang and am proud to be endorsing him. He’s offering me a thousand bucks a month to say this. Andrew is a visionary whose humanity is boundless. I’m honored to be part of the #YangGang.”

Dave Chappelle performs to a sold out crowd onstage at the Hollywood Palladium.

Other Yang backers include Childish Gambino aka Donald Glover, who took a position on his campaign as creative consultant; actors Steven Yeun from “The Walking Dead” and Teri Hatcher from “Desperate Housewives,” and “Guardians of the Galaxy” director James Gunn.

Yang has lately garnered just 3.6% of support in a RealClearPolitics average of national polls, but his candidacy has so far outlasted that of career politicians such as Sens. Kamala Harris and Cory Booker. Yang failed to qualify for the January debate and has yet to make the list for the Feb. 7 debate. 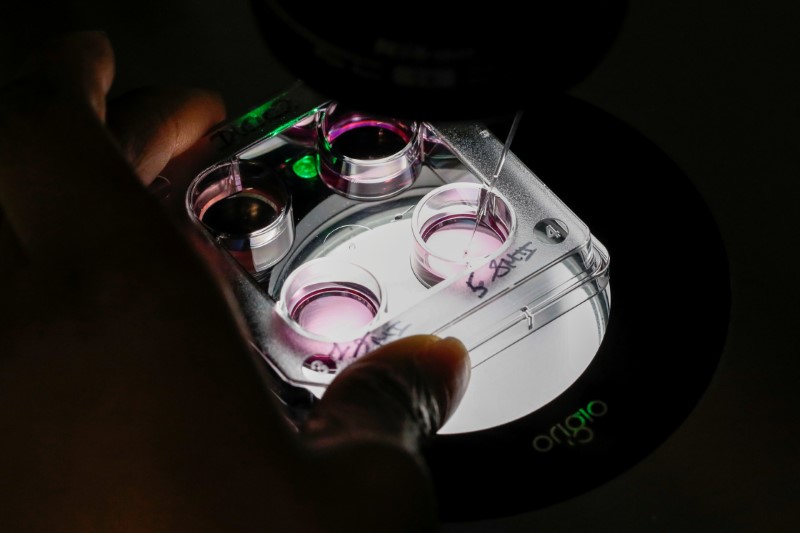