Gwyneth Paltrow confirmed her engagement to producer Brad Falchuk in the newest issue of Goop magazine. She posed with her fiancé for the cover of the magazine, standing in front of him while he wraps his arms around her. The couple wear matching outfits in the photo.

Paltrow made her announcement in Goop magazine’s second issue, which is sex- and love-themed. She wrote: “[A]t midlife, I have tried to accept how complex romantic love can be. I have decided to give it a go again. Not only because I believe I have found the man I was meant to be with, but because I have accepted the soul-stretching, pattern-breaking opportunities that (terrifyingly) are made possible by intimacy.”

She also said that it’s taken her time to come to terms with her 2014 divorce from Coldplay frontman Chris Martin. She said of her divorce, “[It] used to feel like a failure; it took me a while to reframe that divorce isn’t a failure.”

Rumors emerged last year that Paltrow and Falchuk were engaged. A source told ET in November that the two had been engaged a year and kept it under wraps. Paltrow had been quietly sporting several rings on her left hand, including one on her ring finger.

Paltrow and Falchuk had their first official outing together at the “Scream Queens” premiere in September 2015. Paltrow had a role on “Glee,” which Falchuk co-created.

In August, the actress said that it’s taken her “a lot of work” to get to where she is now, in a “good romantic relationship.”

Lindsey Graham takes a dig at Trump over 'genius' claim

Mon Jan 8 , 2018
Sen. Lindsey Graham took a dig at President Donald Trump during an appearance on “The View” today, saying that the reason why Trump calls himself smart is “if he doesn’t call himself a genius nobody else will.” The comment came when Graham, R-S.C., was asked if he thinks Trump is […] 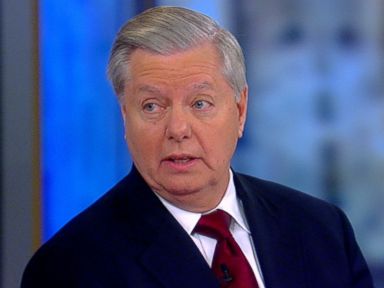