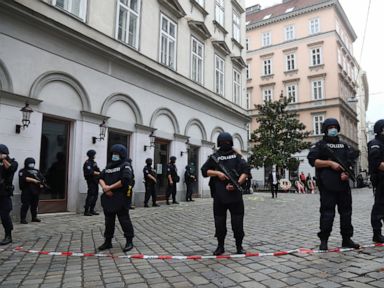 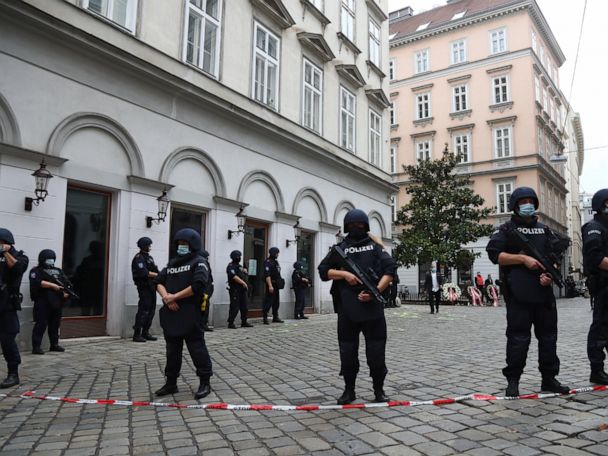 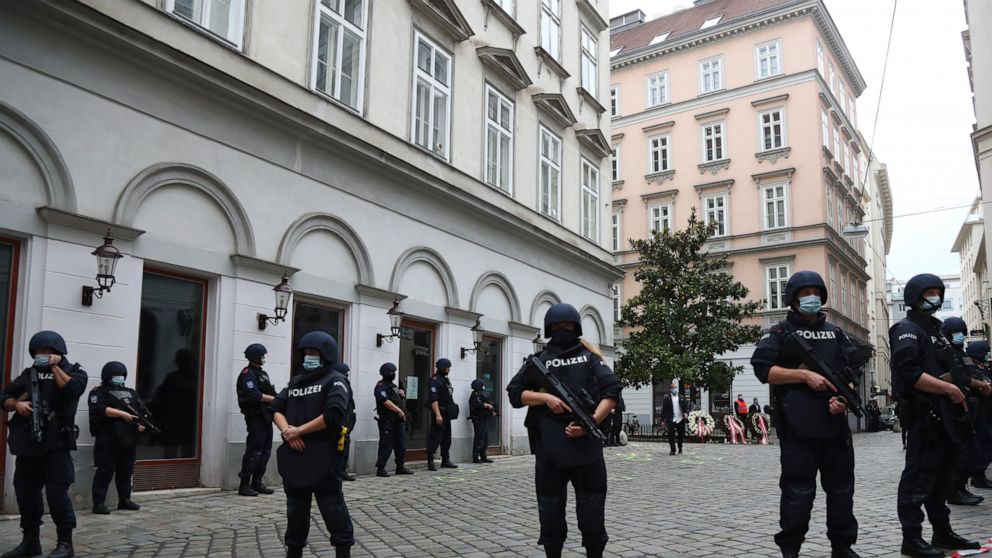 VIENNA — A man who had previously tried to join the Islamic State group rampaged in Vienna armed with an automatic rifle and a fake explosive vest, fatally shooting four people before he was killed by police, Austrian authorities said Tuesday.

Witnesses described dozens of screaming people fleeing the sounds of gunshots Monday night in a nightlife district crowded with revelers enjoying the last hours before a coronavirus lockdown.

Others barricaded themselves inside restaurants for hours until they were sure the danger had passed. Video that appeared to be from the scene showed a gunman, dressed in white coveralls, firing off bursts seemingly at random as he ran down the Austrian capital’s dark cobblestone streets.

While the attack lasted just minutes, authorities said only on Tuesday afternoon that there was no indication of a second attacker — adding to tension in the capital as residents were urged to stay home.

Two men and two women died from their injuries in the attack — including one German woman, according to Germany’s foreign minister. Authorities said a police officer who tried to get in the way of the attacker was shot and wounded, along with 21 other people.

The suspect was identified as a 20-year-old Austrian-North Macedonian dual citizen with a previous terror conviction for attempting to join the Islamic State group in Syria. Police searched 18 properties as well as the suspect’s apartment, detaining 14 people associated with the assailant who are being questioned, Interior Minister Karl Nehammer said.

“Yesterday’s attack was clearly an Islamist terror attack,” Chancellor Sebastian Kurz said. “It was an attack out of hatred — hatred for our fundamental values, hatred for our way of life, hatred for our democracy in which all people have equal rights and dignity.”

The attacker, identified as Kujtim Fejzulai, was armed with a fake explosive vest, an automatic rifle, a handgun and a machete, according to Nehammer. Before the attack he posted a photograph on a social media account showing him posing with the rifle and machete, Nehammer said.

Fejzulai was sentenced to 22 months in prison in April 2019 but was granted early release in December.

“The fact is that the terrorist managed to deceive the judicial system’s deradicalization program” to secure his release, Nehammer said, adding that the system should be reevaluated.

He also said that an attempt to strip the suspect of his Austrian citizenship had failed for lack of enough evidence. In North Macedonia, Interior Ministry spokesman Toni Angelovski said authorities there would cooperate with Austrian police.

Some of the circumstances are reminiscent of the case of Usman Khan, who stabbed two people to death in 2019 in central London. Khan had been sentenced to 16 years in prison after being convicted for his role in a plot to bomb the London Stock Exchange. He was released in December 2018 after serving half his sentence, as are most prisoners in Britain. While in prison, Khan had begun working with a program that seeks to rehabilitate criminals through storytelling and workshops.

Nikolaus Rast, Fejzulai’s lawyer in the 2019 case, told public broadcaster ORF that his client had seemed “completely harmless” at the time.

“He was a young man who was searching for his place in society, who apparently went to the wrong mosque, ended up in the wrong circles,” Rast said.

Fejzulai’s family “wasn’t strictly religious at all; the family wasn’t radical,” Rast added. “I still remember that the family couldn’t believe what had happened with their son.”

Authorities worked well into Tuesday to determine whether there were any other attackers, with some 1,000 police officers on duty in the city. People in Vienna were urged to stay at home if possible on Tuesday, and children did not have to go to school.

By mid-afternoon, investigators sifting through copious video evidence had found “no indication of a second perpetrator,” Nehammer said. “But because the evaluation is not yet concluded, we cannot yet say conclusively how many perpetrators are responsible for the crime.”

For the time being, an elevated security level will remain in place in Vienna along with a reinforced police presence, he said. The country held a minute of silence at midday Tuesday, accompanied by the tolling of bells in the capital, and the government ordered three days of official mourning, with flags on public buildings to be flown at half-staff.

The shooting began shortly after 8 p.m. Monday near Vienna’s main synagogue as many people were enjoying a last night of open restaurants and bars before a monthlong coronavirus lockdown, which started at midnight.

Nine minutes later, it was over, Nehammer said.

Alois Schroll, an Austrian lawmaker and the mayor of the town of Ybbs, said he had just arrived at a nearby restaurant when the shooting began. He said he “saw many, many people running with their hands up high, they were in a panic and screaming.”

Police “sealed off the entire restaurant,” Schroll, 52, told The Associated Press. “People inside the restaurant were in shock, there were several women who were crying. And it wasn’t until shortly before 1 a.m., that police finally let us out of the restaurant.”

Schroll said he wasn’t allowed back to his apartment because the area was still blocked off — and so he spent hours wandering the streets.

Rabbi Schlomo Hofmeister said he saw at least one person shoot at people sitting outside at bars in the street below his window near the city’s main synagogue.

“They were shooting at least 100 rounds just outside our building,” Hofmeister said.

The attack drew swift condemnation and assurances of support from leaders around Europe, including from French President Emmanuel Macron, whose country has experienced three terror attacks in recent weeks. U.S. President Donald Trump also condemned “yet another vile act of terrorism in Europe.” Britain raised its terror threat level to severe, its second-highest level, following the attack in Austria and others in France.

‘And the winner is?’ – Risk of contested vote has U.S. allies on edge

Tue Nov 3 , 2020
November 3, 2020 By Luke Baker and Andreas Rinke LONDON/BERLIN (Reuters) – As Americans head to the polls, prime ministers and presidents around the world face a delicate question – when to congratulate the eventual winner, especially given the risk the election result will be contested. On the one hand, […]