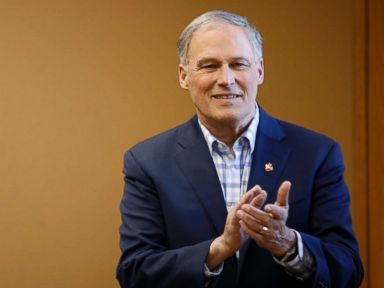 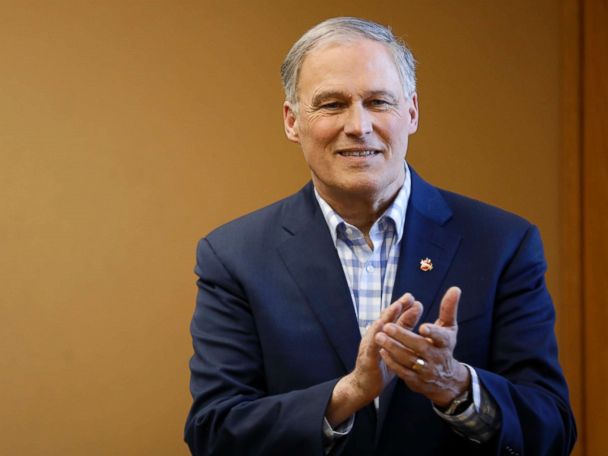 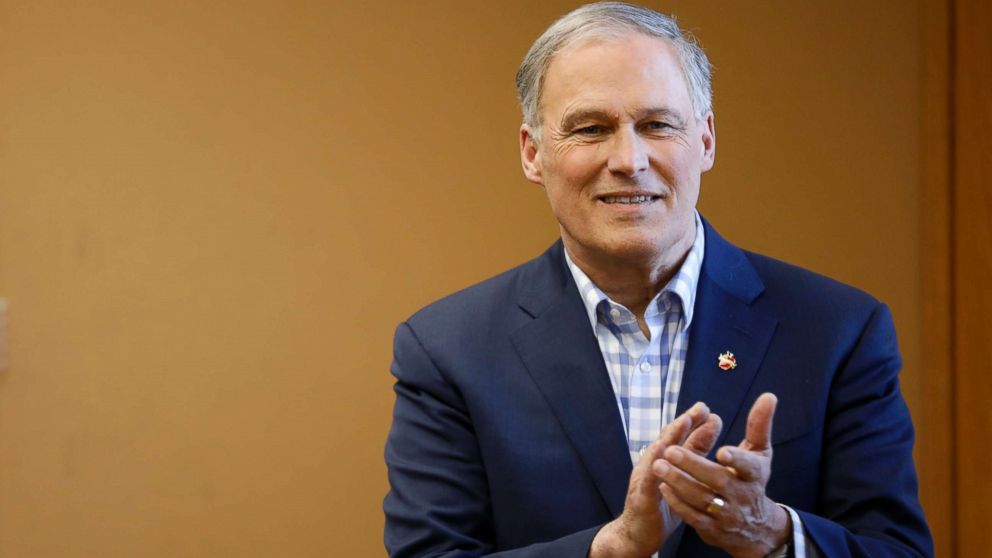 The rising tide of 2020 Democratic presidential hopefuls calling for environmental reform now includes Gov. Jay Inslee of Washington, a politician who has made climate change the crux of his campaign.

Inslee unveiled his initiative, dubbed the “100% Clean Energy for America Plan,” on Friday morning. The proposal’s scope is sweeping — laying out 100% clean energy standards across three sectors: electricity, new vehicles and the construction of new buildings.

The plan would meet, and even exceed the Intergovernmental Panel on Climate Change targets for carbon reduction — which say that carbon dioxide emissions must be reduced by 45 percent by 2030, reaching near-zero by 2050. The policy rollout ties together the overarching thesis of Inslee’s campaign — allying the fight against climate change with national security, health care and the economy.

“The course of inaction is the course of economic disaster,” Inslee said ahead of the plan’s rollout.

His aggressive proposals on climate change come as the party’s progressive wing, bolstered by young voters, has continued to call for candidates to take a more aggressive approach. Democrats continue to debate the best way to combat climate change, an issue that is poised to take on a greater level of importance this cycle than any the party has held in years past.

A recent poll conducted by Harvard Institute of Politics of young people, ages 18 to 29, found a substantial 14-point increase from the same poll they conducted in 2015 in those that say they believe “government should do more to curb climate change, even at the expense of economic growth.”

“This is the first time in our history climate change is going to be a voting issue, and a top theme of election 2020,” said Dana R. Fisher, a professor whose work centers on understanding the relationship between environmentalism and democracy, most recently studying activism and American climate politics. “There’s such momentum amongst active and progressive young Americans — they’re probably the most engaged electorate right now — because the news just keeps getting worse and worse, and the American public is listening and going to put pressure on their candidates. They’re shining a light on this, and there’s momentum for candidates to speak about the issue.”

If elected, Inslee’s proposal begins on day one of his administration. Then, spanning over 10 years, it aims by 2030 to reach 100% zero emissions from new vehicles; zero carbon pollution from all new commercial and residential buildings; and would require 100% carbon-neutral power across the country. By 2035, it proposes completely clean, renewable and zero-emission energy nationwide.

Inslee says he will aim to make sure coal industry workers, their families and their communities don’t fall through the cracks. That means as the nation transitions — extra training for new clean energy jobs, education and assurance of opportunities in a clean energy economy.

“These folks who have worked in the coal industry are deserving of incredible respect and dignity,” Inslee told ABC News. “They are people whose contributions of multiple generations have literally built the economy of the United States, people who are doing really hard work, and are deserving of our respect and what we’ve done in the state of Washington — which is to make sure that as we go through this transition, that we also make sure we are caring for and embracing these communities to make sure they have a future as well.”

Inslee is no newcomer to such efforts. His model draws from measures he’s undertaken with success in his own state, experts said.

“Gov. Inslee has been a leading advocate for transitioning America to clean, renewable energy for decades. This is not a new-found passion of his,” said Mark Jacobson, a climate expert and Stanford University professor, who described Inslee’s initiatives as “feasible, bold, and necessary first steps.”

Inslee’s team likens the initiative to President John F. Kennedy’s “Moonshot.” That famous tagline came as America embarked on efforts to conquer the final frontier of space and reach the moon. It is a fitting characterization that seems to anticipate, as there was then, public disquiet about the cost and value of such radical efforts. Democrats addressing the new climate fight through eliminating coal power and retiring its plants, have in the past run the risk of alienating Rust Belt constituents.

But experts say, regardless of who’s in the White House, this evolution is vital.

“Here’s the take home message, coal is dead, basically. And that’s no matter who sits in the White House,” Fisher told ABC News. “Coal is being phased out everywhere. At this point, people just want to deal with the fact that this transition has to happen and there are these opportunities to initiate and have new clean energy and clean technology jobs. There’s no question in my mind.”

In order to even begin achieving his ambitious goals and getting his message out to a wider audience, Inslee first has to accomplish another goal: meet the thresholds set forth by the Democratic National Committee to make the first primary debates, slated to be held next month in Miami. Inslee said his campaign is “approaching” the 65,000 individual donors required by the DNC to make the debate stage, but has not met that number yet.

The Washington governor is also still working to gather support for a debate solely focused on climate change, an idea that has garnered support from a few of his Democratic rivals, but something he says he has not heard back from the DNC on yet.

“I think this is really important to highlight this issue, it is the existential threat to our nation. And I welcome it frankly, for my self-interest, it will give me an opportunity to separate the wheat from the chaff,” Inslee told ABC News in an interview ahead of the rollout of his plan.

“Look there’s a lot of candidates who have a to-do list on their refrigerator door, and somewhere on that to-do list they’ve written climate change … but it can’t just be a to-do list. It’s something that you wake up every single morning of your presidency committed to, and I’m the only candidate frankly who has demonstrated that commitment in this race.”

As Democrats continue to sort out the increasingly crowded and competitive primary, several other candidates have come forward with bold plans of their own. Notable among them, former Texas Rep. Beto O’Rourke, who only days earlier announced his four-pillar, $5 trillion plan to combat climate change.

Last week, New Jersey Sen. Cory Booker released the specifics of what he calls his “environmental justice plan,” which he says would take “immediate steps” to strengthen the power of the Environmental Protection Agency, which he accuses the Trump administration of “gutting.”

“Right now under this president, the number of actions that are being taken against polluters has gone dramatically down,” Booker said during a campaign stop in Columbia, South Carolina last Friday.

Massachusetts Sen. Elizabeth Warren speaks often of the “climate crisis” on the campaign trail, and released a plan earlier this month on protecting public lands, which would roll back many of President Donald Trump’s environmental policies, halt offshore drilling on publicly owned lands and restore original boundary lines for two national monuments that were shrunk under the current administration.

Warren and a number of her Senate colleagues running for president, including Booker, Sens. Bernie Sanders, Kirsten Gillibrand and Kamala Harris are all either co-sponsors of or support the Green New Deal.

On his campaign website, Sanders describes climate change as the “the single greatest threat facing our planet,” while Booker refers to it as a “economic and national security crisis,” on his U.S. Senate website.

But even with a broad consensus among the Democrats running for president that climate change is a threat that requires a strong response, there is disagreement on the most effective way to do it.

Sen. Amy Klobuchar says that she sees the Green New Deal as “aspirational” and former Colorado Gov. John Hickenlooper has come out as publicly opposing the proposal, saying it “sets unachievable goals,” despite labeling climate change as the “defining challenge of our time.”

Inslee’s campaign has been somewhat critical of O’Rourke’s plan for its so-called “borrowed rhetoric.”

When asked about the Inslee campaign’s remarks on his record, and his current climate plan, O’Rourke’s campaign said they had no further comment.

“I welcome anyone who is following my lead. People will have to ask if other candidates have ever actually introduced legislation or really provided leadership because I think this does require a huge lift and requires a passionate voice. And I’ve been providing this for a long period of time, I’m not just a kind of latecomers to this issue,” Inslee said.

Fri May 3 , 2019
Iranian oil minister Bijan Zanganeh  Patti Domm | CNBC Iran’s oil minister is warning that OPEC is “likely to collapse” because some members of the 14-nation group are working against their fellow producers. The comment appears to be a thinly veiled reference to Saudi Arabia and the United Arab Emirates. […] 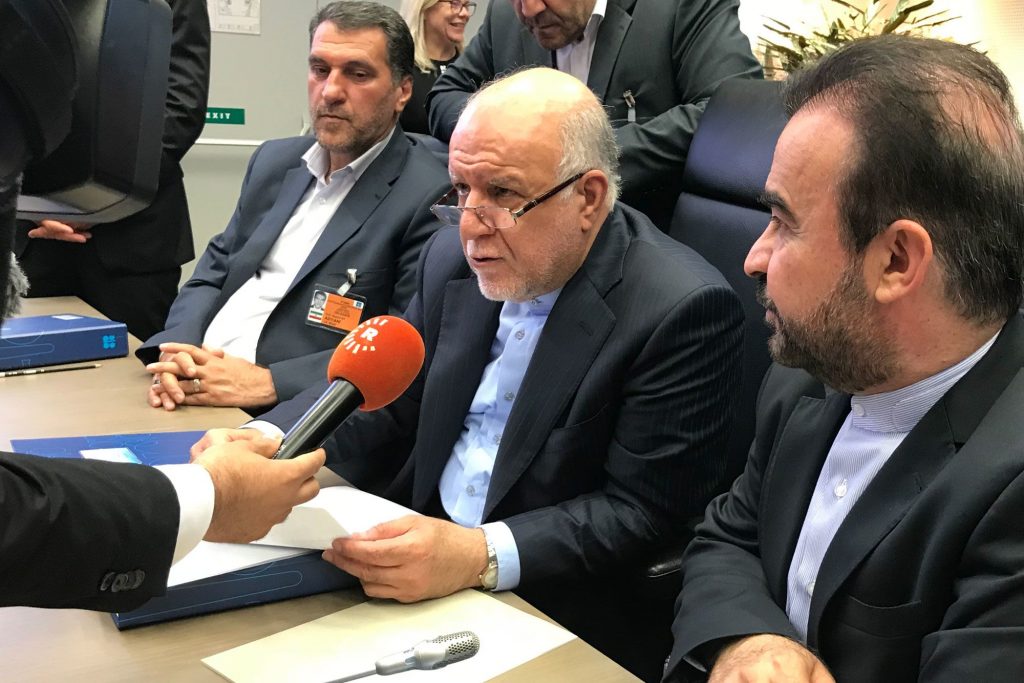