Activists and leaders in the right wing of the Texas Republican Party joined a crowd of about 200 at the state governor’s mansion to protest some of Republican Gov. Greg Abbott’s orders intended to slow the spread of the coronavirus

AUSTIN, Texas — Activists and leaders from the right wing of the Texas Republican Party on Saturday continued their backlash against Gov. Greg Abbott’s handling of the coronavirus pandemic, staging a protest outside his home as they criticized his orders as overbearing and unlawful.

“Quite frankly, governor, your cure is worse than the disease,” Miller said, The Texas Tribune reported.

West, who has criticized some of Abbott’s efforts to stem the spread of the virus, read a resolution that the State Republican Executive Committee passed last month calling for Texas to reopen.

“We call upon the governor to do what is right by the people of the great state of Texas so that Texas can continue to be a leader,” West said. “And if the governor did not get this resolution, I’m gonna leave it right here, at the gates of the Governor’s Mansion.”

The crowd also marched around the mansion carrying signs such as “Open Texas Now” and “Exile King Abbott.”

Abbott was scheduled for a Saturday morning campaign event in Dallas and shortly after noon tweeted a photo of himself at the Texas-Oklahoma football game in Dallas.

COVID-19 has killed more than 16,500 people in Texas, according to the state’s official count, and is closing in on 800,000 confirmed cases since the pandemic started.

The death toll and number of those who have been infected is likely higher because many people haven’t been tested and studies suggest they can be infected and not feel sick.

The demonstration on Saturday came days before Texas voters begin early voting and as the nation’s largest red state has refused to expand mail-in voting, which has gained popularity nationwide during the pandemic. Polls show unusually tight races in America’s biggest red state, putting Republicans on the offensive as Democrats see their best chance of seizing control of the state House of Representatives for the first time in two decades.

In September, West and others escalated their feud with Abbott by filing a lawsuit straight to the Texas Supreme Court looking to stop the governor’s six-day extension of early voting. They argue Abbott was not authorized to do so without input from the state Legislature, which is out of session this year and won’t meet again until January.

West has suggested without evidence that expanding voting in any form will invite fraud. Voter fraud is exceedingly rare in the United States.

Earlier this week, Abbott lifted his shutdown order on bars that has been in place since June, though he gave county leaders control to keep them closed locally.

Sat Oct 10 , 2020
A stack of hay bales on a western Massachusetts farm that were painted to show support for the Democratic presidential ticket went up in flames and authorities say one man has been arrested in connection with the blaze ByThe Associated Press October 10, 2020, 11:15 PM • 2 min read […] 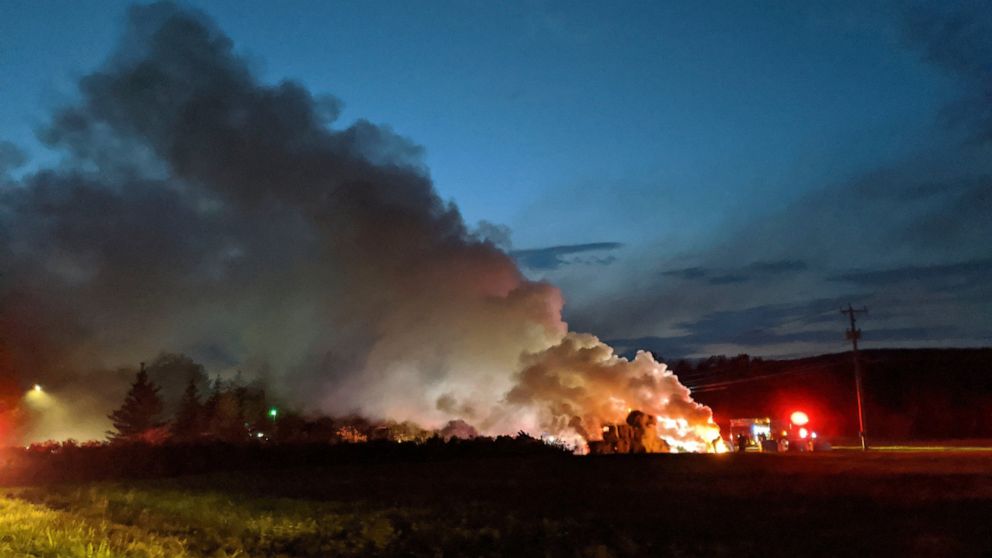