KIAWAH ISLAND, South Carolina (Reuters) – Cam Davis had “one really poor swing” that led to a triple bogey in his opening round at the PGA Championship on Thursday but put the setback behind him and finished strong, pulling into a six-way tie for second in his debut at the major.

The 26-year-old Australian saw his tee shot on the par-four sixth hole sail out of bounds and his drop in the bunker did not go according to plan.

“It was a bit disappointing coming out of it with a triple because I actually thought I did a good drop in the sand,” he told reporters.

“I thought I had found a nice, flat spot and it just took a half roll to the side into a footprint and from there it became a battle.

“But from then onwards, the next hole, I hit a good tee shot and kind of kept it rolling.”

Where others faltered coming in amid the windy conditions at the Ocean Course, Davis kept his scorecard clean on the back nine and finished his round with four birdies and an eagle for a 3-under 69, two shots back of leader Corey Conners.

“With the wind not being super strong, those final holes didn’t have as much teeth as they would have had otherwise,” said Davis, who went as part of the afternoon wave.

“The last couple days in the practice rounds, those holes were a little more interesting.”

Davis said staying cool when the pressure is on will be key as he looks to win his first major title.

“It helps when you’re hitting the ball in good spots and not really having to stress too much,” he said.

“There was one hole where I was a little bit frazzled but for the most part, I was doing my own thing, playing the golf course the way that I see fits my game and that’s really all I can do.

“And just try to chill out between shots.”

(Reporting by Andrew Both; writing by Rory Carroll in Los Angeles; Editing by Peter Rutherford)

Maple Leafs’ John Tavares leaves on a stretcher after collision

Fri May 21 , 2021
May 20, 2021; Toronto, Ontario, CAN; Toronto Maple Leafs forward John Tavares (91) is taken off of the ice on a stretcher after a collision with Montreal Canadiens forward Corey Perry (not pictured) during the first period of game one of the first round of the 2021 Stanley Cup Playoffs […] 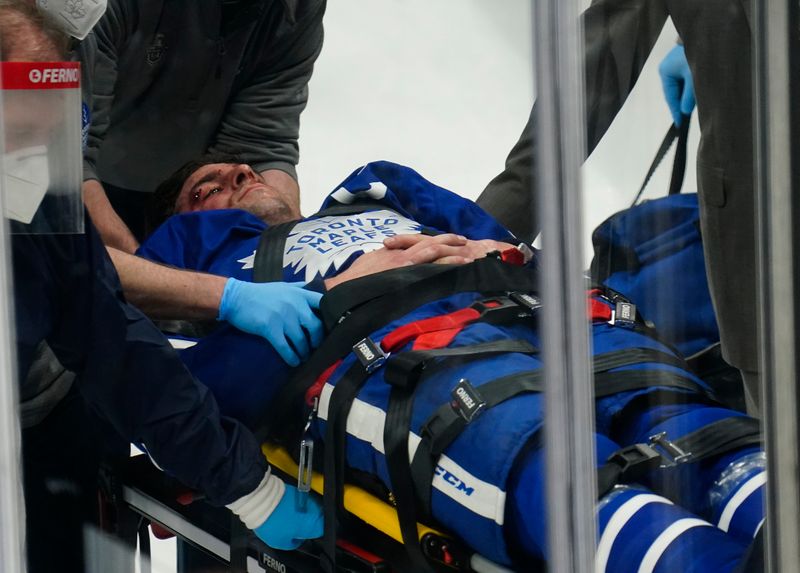