By Guy Faulconbridge and Helen Reid

LONDON (Reuters) – Goldman Sachs sees Prime Minister Theresa May clinching a Brexit deal on access to European Union markets for goods and getting it approved by the British parliament, though it cautioned that a disorderly exit and national election remained possible.

With less than eight months left until Britain is due to leave the EU, there is little clarity about how trade will flow as May, who is grappling with a rebellion in her party, is still trying to strike a deal with the bloc.

Under the current timetable, London and Brussels hope to get a final deal in October to give enough time to ratify it by exit day, though May’s minority government faces a series of make-or-break moments in the Brexit process over coming months.

“Our own base case is for an orderly withdrawal, although the tail risks have admittedly increased,” Goldman said in a research notes for clients. “We see the UK and EU settling on a free trade deal covering goods but excluding most services.”

Ultimately, Goldman said, May will probably be able to get such a Brexit deal through the British parliament in December.

“While there may be no clear majority in parliament for any specific Brexit proposal, there is a majority to avoid the no deal outcome,” it said.

Both opponents and supporters of Brexit agree that the divorce is Britain’s most significant geopolitical move since World War Two, though they cast vastly different futures for the $2.9 trillion UK economy and the world’s biggest trading bloc.

Opponents say it is folly that will diminish Britain’s standing in the world, cost hundreds of billions of dollars in lost growth over the decades ahead and delay much needed reforms.

Supporters of Brexit say there may be some short-term pain for the economy, but that long-term it will prosper when cut free from the EU, which some of them cast as a failing German-dominated experiment in European integration.

But if May does not get the deal approved, then Britain could face a national election and the prospect of a Labour government, a scenario that could lead to extending Brexit negotiations or even stopping Brexit altogether, Goldman said.

“Although UK political dynamics have raised the likelihood of a no-deal scenario, we continue to believe it is relatively low,” Goldman said.

There is deep concern in boardrooms about the prospect of Britain leaving the bloc without a deal, or with a deal that would silt up the arteries of trade.

It said gilts would rally if there were a ‘no deal’ Brexit.

“A ‘no-deal’ Brexit would be a risk-off event for global markets, causing Gilts to rally,” Goldman said.

“While the Labour government would be unlikely to reverse course on Brexit, the combination of its softer position on Brexit and its domestic policy agenda would likely imply higher long-term yields.”

Fri Aug 10 , 2018
A traditional red London bus crosses Waterloo Bridge, with the financial district in the background, in London Britain, May 31, 2018. REUTERS/Henry Nicholls August 10, 2018 LONDON, Aug 10 (Reuters) – Britain’s economy picked up some speed in the second quarter after a sharp winter slowdown earlier in the year […] 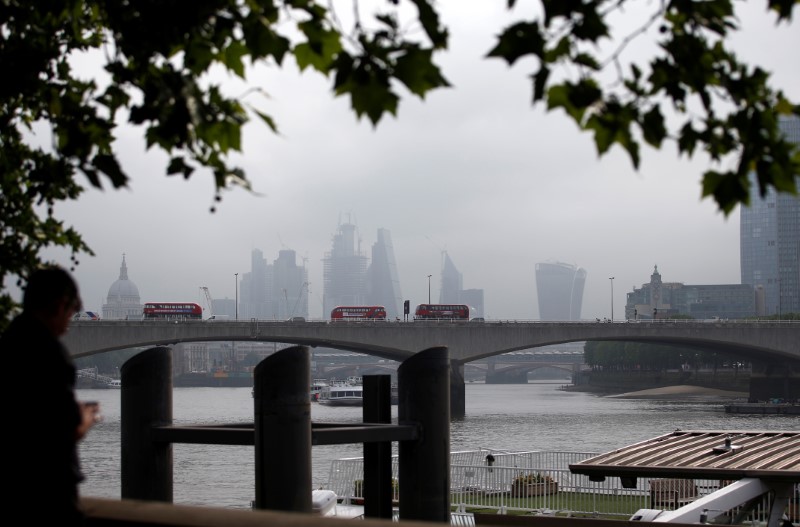