Investors seeking protection against an uncertain U.S. election could park their money in the Japanese yen, an analyst from Goldman Sachs said on Tuesday.

Markets have increasingly warmed up to a “blue wave” in the U.S. elections this week. That’s an outcome where Joe Biden defeats Donald Trump in the presidential race, and Democrats win a majority in both chambers of Congress.

But some investors are concerned that the election result may not be what’s expected, and the outcome of the presidential race could be contested if there’s no clear winner — developments that would cause greater volatility in markets.

“We think that the Japanese yen probably will continue to be the preferred expression to hedge more uncertain election outcomes or a delayed count,” said Zach Pandl, co-head of global foreign exchange, rates and emerging markets strategy at Goldman Sachs.

He told CNBC’s “Street Signs Asia” that the yen — a safe-haven currency — is undervalued and has room to appreciate as global interest rates remain low and investors move away from the U.S. dollar. He said the yen’s “fair value” is around 95 yen per U.S. dollar.

But the yen, which traded at around 104.72 per U.S. dollar on Tuesday afternoon HK/SIN, is “still quite far away” from that level and may not get there soon, said Pandl.

“It’s going to require catalysts or require Japanese investors pulling back some degree from global markets,” he said. “But in a disorderly period for the global economy, whether an election uncertainty or on future lockdowns, the yen probably deserves a place in investor portfolios.”

If a “blue wave” materializes, the possibility of bigger fiscal stimulus in the U.S. in the coming year could lift “pro-risk” currencies, according to Pandl. He added that his preferred play given that election outcome would be the Canadian dollar and the Australian dollar.

Tue Nov 3 , 2020
Biden’s top campaign officials held a briefing to detail their expectations for election night, outlining Biden’s paths to victory and denouncing reports that the president might prematurely declare victory while millions of votes remain to be counted. “It was reported yesterday that President Trump believes that if he wins the […] 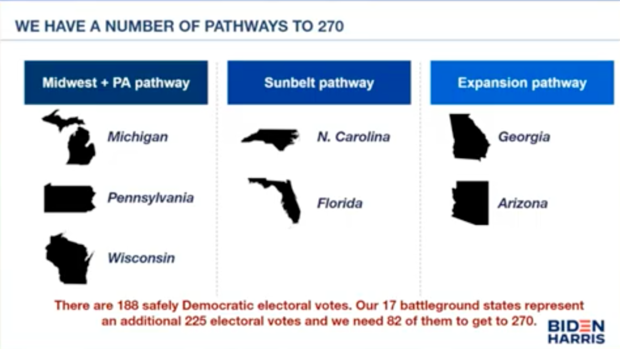