TOKYO/NEW YORK – Global stocks eyed an all-time peak while the dollar and U.S. bond yields stayed sluggish on Friday on hopes a divided U.S. Congress would hinder large government borrowing, which could pave the way for even more central bank stimulus.

Investors expect Democrat Joe Biden to beat President Donald Trump and the Republicans to retain control of the Senate, allowing them to block Democrat policy such as corporate tax hikes and debt-funded spending on infrastructure.

“With the prospects of fiscal stimulus constrained by a likely gridlock in Washington, monetary policy will likely have to do heavy lifting, boosting risk assets and putting pressure on the dollar,” said Hiroshi Watanabe, economist at Sony Financial Holdings.

STOCK FUTURES BOUNCING AROUND WITH RACE CLOSE IN SEVERAL BATTLEGROUNDS

A sense a Biden presidency will be more predictable than Trump’s is also underpinning risk sentiment, even though investors saw no quick rapprochement between Washington and Beijing on trade and other issues.

MSCI’s all-country index of the world’s 49 markets inched up 0.05%, bringing its record peak hit in September within sight. Global stocks eyed an all-time peak while the dollar and U.S. bond yields stayed sluggish on Friday on hopes that a divided U.S. legislature would hinder large government borrowing, which could pave the way for even more central bank stimulus. (Photo

European stocks are seen giving up some of their big gains this week, with Euro Stoxx 50 futures down 0.8% and FTSE futures falling 0.5%.

U.S. bond yields drifted lower, with 10-year Treasury yield falling to 0.766%, more than 150 basis points below the pre-U.S. election level seen on Tuesday. It had struck a three-week low of 0.7180% on Thursday.

The Federal Reserve kept its monetary policy loose and pledged to do whatever it takes to sustain a U.S. economic recovery.

Trump’s attempts to pursue lawsuits challenging the election process in several states have so far done little to change investors’ expectations on the election outcome.

Still, some market players are wary of street protests getting violent, after Trump claimed the election was being “stolen” from him.

With COVID-19 raging in the United States and parts of Europe, many investors assume more monetary stimulus is inevitable.

The Bank of England expanded its asset purchase scheme on Thursday while the European Central Bank is widely expected to announce more stimulus next month.

Investors also focused on the prospects of stalled talks on a U.S. coronavirus relief package restarting.

“We still anticipate that there will be a fiscal package in excess of $1 trillion next year,” said James Knightley, chief international economist at ING Group in New York.

“This stimulus, when combined with a long-anticipated COVID-19 vaccine, can really lift the economy and drive growth. We consequently remain very upbeat on the prospects for 2021 and 2022.”

In currency markets, lower yields undermined the dollar against its rivals.

A softer dollar supported the Japanese yen, which climbed to a near eight-month high of 103.43 yen against the dollar overnight. It was steady in early Asian trade at 103.52 yen.

Gold, which is limited in supply and seen as a hedge against inflation in an era of ultra-loose monetary and fiscal policies, eased slightly to $1,939 per ounce after jumping over 2% overnight.

Even bitcoin rode high, notching up a gain of 10% on Thursday and hitting a high last seen in January 2018.

Oil prices were sluggish as new lockdowns in Europe to contain the coronavirus disease darkened the outlook for crude demand. Brent crude was down 1.73% at $40.22 a barrel.

Fri Nov 6 , 2020
Twitter banned an account used by former top Trump adviser Steve Bannon after he called for the beheading of Dr. Anthony Fauci and FBI Director Christopher Wray on his podcast Thursday. A Twitter spokesperson confirmed to CBS News that, “The @WarRoomPandemic account has been permanently suspended for violating the Twitter […] 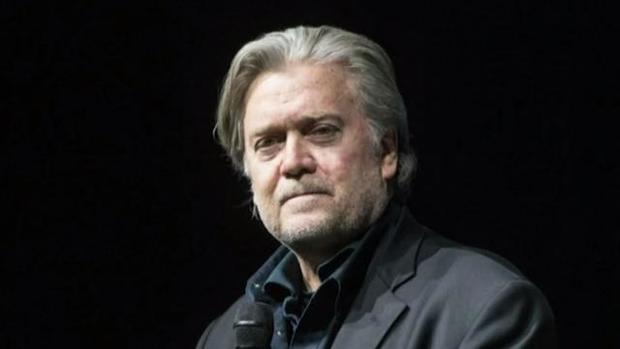