Construction cranes are seen at sunrise in the financial district of Dublin, Ireland October 18, 2018. REUTERS/Clodagh Kilcoyne

By Indradip Ghosh and Rahul Karunakar

BENGALURU (Reuters) – The outlook for global growth in 2019 has dimmed for the first time, according to Reuters polls of economists who said the U.S.-China trade war and tightening financial conditions would trigger the next downturn.

At the start of 2018, optimism about a robust global economic outlook was almost unanimous among respondents.

But Reuters polls of more than 500 economists taken this month showed a downgrade to the outlook for 18 of 44 economies polled, with 23 unchanged. Only three were marginally upgraded.

While risks from trade protectionism have been consistently highlighted by Reuters polls since January last year, the latest indicated that growth in about 70 percent of 44 economies surveyed has already peaked.

“A simple dynamic is playing out in the global economy right now: the U.S. is booming, while most of the rest of the world slows or even stagnates. The stresses caused by this divergence are playing out uncomfortably in many emerging markets,” noted Janet Henry, global chief economist at HSBC.

“A U.S. Federal Reserve that is raising interest rates to prevent the U.S. economy from overheating is constraining the policy options of countries where financial conditions are tightening and trade tensions intensifying.”

The latest shift in growth expectations comes on the heels of a deep sell-off in financial markets, especially emerging ones, largely driven by trade concerns.

A majority out of nearly 150 economists said the top two triggers for the next global downturn were a further escalation of U.S.-Sino trade tensions, and tightening in financial conditions driven by a deep sell-off in global equities or a rapid rise in government bond yields.

“First, there would be no winners from a global trade war. Even if the aggregate costs are modest and skewed toward more open economies, all countries would ultimately be worse off compared to the status quo,” noted Neil Shearing, group chief economist at Capital Economics.

“(it)… would inflict lasting damage to growth and cause a permanent loss of output.”

For graphic on what will trigger the next downturn click https://tmsnrt.rs/2PFcMCF?

A majority of economists covering the U.S. economy who were asked an additional question said U.S. economic policy toward China over the next few years would become more confrontational.

Along with faster-than-expected increases in U.S. interest rates compared to the previous poll, that points to a substantial slowdown in the U.S. economy by late next year, even as it remains the current major driver of global growth.

But only a slim majority expect U.S. wage growth to pick up meaningfully before the next recession.

“The risk of a self-inflicted wound in the U.S. is rising. The dominant downside risk to the global outlook remains the Trump Administration’s attempt to rebalance trade with China through tariff policy,” noted Jean-François Perrault, chief economist at Scotiabank.

“The consequences of escalating trade actions are undeniable: higher prices in China and the U.S., less purchasing power for consumers in these countries, higher input costs, heightened financial market volatility, and possibly higher interest rates. These effects would likely spill over from these countries.”

While global growth this year will hold strong, unchanged at July’s 3.8 percent prediction, the consensus for 2019 was 3.6 percent, a cut for the first time since polling began for that period in July 2017. That was also lower than the International Monetary Fund’s recent 2019 projection of 3.7 percent.

The European Central Bank was not expected to extend its bond-buying program beyond this year, despite additional economic and political concerns from Italy and Brexit negotiations mounting.

But with no let-up in the U.S.-China trade war, growth forecasts point to more pain ahead – not just for developed but also emerging market economies.

From China to Turkey and Africa to Latin America, growth forecasts for the coming year were downgraded.

“There has been an abrupt ‘stop’ of capital flows to EM (emerging markets) over recent months, which has created painful consequences for EM with large external deficits,” said Adam Slater, a lead economist at Oxford Economics.

Mon Oct 22 , 2018
People walk in front of an electronic stock quotation board outside a brokerage in Tokyo, Japan, October 15, 2018. REUTERS/Toru Hanai October 22, 2018 By Wayne Cole SYDNEY (Reuters) – Asian share markets fell anew on Monday as investors braced for the peak of the U.S. earnings season while angst […] 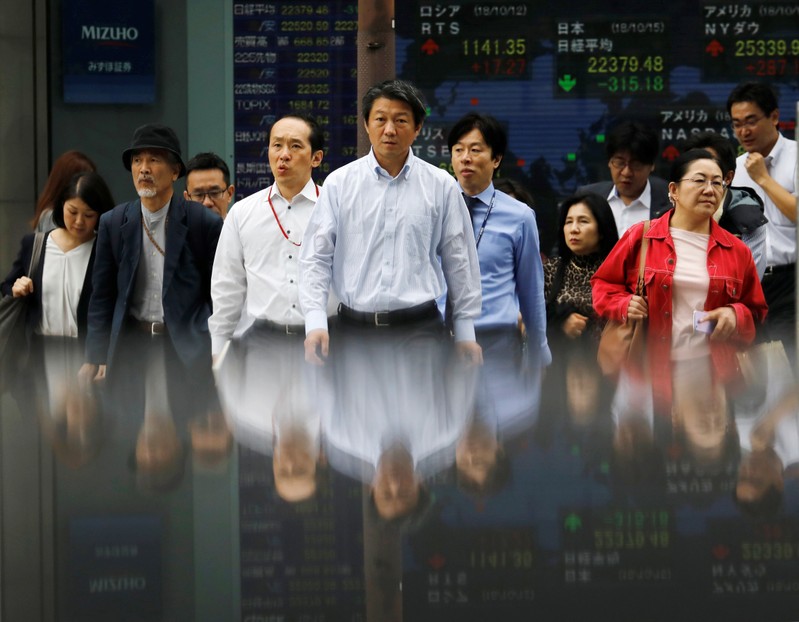