Washington— President Trump’s personal lawyer Rudy Giuliani refused to comply with a congressional subpoena for documents about his efforts to pressure the Ukrainian government, with his attorney calling the impeachment inquiry “unconstitutional, baseless, and illegitimate.”

Giuliani also parted ways with that attorney, John Sale, whom he recently hired to represent him in the impeachment probe. Sale wrote the letter informing the committees of Giuliani’s refusal to hand over documents.

“Jon Sale, who is a lifelong friend, has represented me for the sole purpose of analyzing the request and responding,” Giuliani said on Twitter. “At this time, I do not need a lawyer.”

The House committees leading the impeachment probe had initially issued a voluntarily request for documents, and issued a subpoena after Giuliani refused to hand them over.

Two of Giuliani’s associates who were involved in his Ukraine work were indicted on federal campaign finance charges last week. Federal investigators are looking into Giuliani’s involvement with the two men, and the investigation will include any business dealings Giuliani may have had with the two men, a person familiar with the matter previously told CBS News. Giuliani denied any knowledge of a federal investigation.

Meanwhile, former Vice President Joe Biden’s son Hunter Biden told ABC News he has no regrets about joining the board of a Ukrainian gas company while his father was in office. Biden said that in retrospect it was “poor judgment” to join the board of Burisma but that he did nothing “improper” and only had a “brief exchange” with his father about his role.

“I gave a hook to some very unethical people to act in illegal ways to try to do some harm to my father,” he said. “That’s where I made the mistake. So I take full responsibility for that.”

Biden told ABC that while he does not regret the work, “what I regret is not taking into account that there would be a Rudy Giuliani and a president of the United States that would be listening to this ridiculous conspiracy idea.”

Also on Tuesday, a key State Department official testified before congressional investigators as lawmakers return to Capitol Hill after a two-week break.

George Kent, the deputy assistant secretary of state in the European and Eurasian bureau, arrived on Capitol Hill for his deposition before the House Intelligence, Foreign Affairs and Oversight committees. In emails from last spring provided to Congress by the State Department inspector general earlier this month, Kent expressed concerns about the administration’s efforts to oust Marie Yovanovitch, then the U.S. ambassador to Ukraine.

Fiona Hill, the former senior director for Russia at the National Security Council, testified Monday behind closed doors in a marathon session lasting more than 10 hours.

The New York Times reported Hill testified that former National Security Adviser John Bolton was opposed to efforts by Giuliani and others to pressure Ukraine, quoting Bolton as saying the former New York mayor was a “hand grenade who’s going to blow everybody up.” Hill also told lawmakers Bolton said he was “not part of whatever drug deal Sondland and Mulvaney are cooking up,” referring to Gordon Sondland, the U.S. ambassador to the E.U., and Mick Mulvaney, the acting White House chief of staff.

A source familiar with Hill’s testimony confirmed the accuracy of the quotes to CBS News.

Asked for comment about Bolton’s comments, Giuliani told CBS News he was “disappointed in John.”

The letter cites the lack of a full floor vote authorizing an inquiry as justification for rejecting the request, saying the “‘impeachment inquiry’ has been designed and implemented in a manner that calls into question your commitment to fundamental fairness and due process rights.”

“Never before in history has the Speaker of the House attempted to launch an ‘impeachment inquiry’ against a President without a majority of the House of Representatives voting to authorize a constitutionally acceptable process,” wrote Matthew Morgan, counsel to the vice president. — Stefan Becket

5:23 p.m.: House Speaker Nancy Pelosi will hold a press conference on Capitol Hill at 6:30 p.m. after meeting with her leadership team to discuss the possibility of holding a full floor vote formally authorizing an impeachment inquiry.

While there is no constitutional requirement for a full House vote, Republicans have been clamoring for one, citing the precedents set in the Clinton impeachment and the Watergate investigation.

Majority Leader Steny Hoyer, walking into Pelosi’s office, said he and other Democratic leaders were discussing the possibility of a full vote, but said no decisions had been made.

Pelosi is set to meet with the full House Democratic caucus at 6 p.m. ahead of her press conference. — Rebecca Kaplan and Stefan Becket

3:50 p.m.: Giuliani is rebuffing a congressional subpoena for documents related to his work on Ukraine, citing a letter from the White House counsel despite his status as a private citizen. He has also parted ways with his attorney, John Sale, who he recently hired to represent him in the impeachment inquiry.

In a letter to the counsel for the House Intelligence Committee, Sale said Giuliani “adopts all the positions set forth in” White House counsel Pat Cipollone letter from October 8, in which Cipollone said the executive branch would not comply with subpoenas in the impeachment inquiry. In his letter, Sale described the impeachment inquiry as “unconstitutional, baseless, and illegitimate.” He also said the documents requested in the subpoena fall under attorney-client and executive privilege.

The House committees initially asked Giuliani to surrender documents voluntarily, and issued a subpoena after Giuliani refused. The deadline for the subpoena was today. — Stefan Becket

​Impeachment — and Biden — to be front and center at Democratic debate

It will also be the first opportunity for Biden to defend himself from the president’s attacks before a large national audience. Since the last debate, the former vice president has come out in favor of impeachment in response to the unfolding Ukraine scandal.

Read updates about the debate, including where to stream it, here.

11:53 a.m.: Republican Congressmen Michael McCaul and Jim Jordan, the respective ranking members of the House Foreign Affairs and Oversight Committee, reiterated their criticism of Democrats’ handling of the impeachment inquiry, with Jordan saying Americans “have the right to know” the identity of the whistleblower who first filed the complaint about Ukraine.

“You don’t think the American people have the right to know the individual who started this process to try to remove the president of the United States 13 months before an election?” Jordan said on Capitol Hill.

McCaul called on Democrats to hold a full floor vote to open an impeachment inquiry, give Republicans subpoena power and allow counsel for the administration to sit in on proceedings.

“It seems to me this whole thing is a rush to judgment,” McCaul said. “While we’re back in our districts for two weeks, they are rushing to judgment, just trying to roughshod the process through.” — Nancy Cordes and Rebecca Kaplan

10:52 a.m.: The House Intelligence Committee issued a subpoena compelling Kent to testify, pushing back against the White House, which has said no members of the executive branch would cooperate in the investigation.

An official working on the impeachment inquiry said the White House and the State Department tried to block Kent’s testimony, but said he “is now complying with the subpoena and answering questions from both Democratic and Republican Members and staff.” — Rebecca Kaplan

Amid ongoing attacks, Hunter Biden has no “regrets” about Ukraine work

7:50 a.m.: Hunter Biden told ABC News that in retrospect it was “poor judgment” to join the Burisma board but that he did nothing “improper” and only had a “brief exchange” with his father about his role.

He added, “I gave a hook to some very unethical people to act in illegal ways to try to do some harm to my father. That’s where I made the mistake. So I take full responsibility for that.”

His role, however, has led to much of the focus surrounding the president’s questionable July 25 call with Ukrainian President Volodymyr Zelensky, during which Mr. Trump pressured Zelensky to investigate the elder Biden — a potential political foe for Mr. Trump in the 2020 election.

The younger Biden was adamant that his father was not compromised in the situation. “There’s been a lot of misinformation about me, not about my dad. Nobody buys Dad,” Hunter said. He added that the narrative that he was “unqualified” for the board was wrong given his past work on prestigious boards and law firms.

“I think that I had as much knowledge as anybody else that was on the board, if not more,” he told ABC.

The Times reports that Bolton had advised Hill to tell lawmakers, “I am not part of whatever drug deal Sondland and Mulvaney are cooking up.”

While it’s unclear exact what Bolton was referencing, in September, CBS News reported that at least one week before Mr. Trump’s call with Zelensky, Mr. Trump instructed Mulvaney to hold off on releasing millions in military aid for Ukraine.

7:15 a.m. Former South Carolina Republican Rep. Trey Gowdy will no longer be joining Mr. Trump’s outside legal team as it focuses on the impeachment inquiry posed by House Democrats, according to a source directly familiar with the situation.

The New York Times first reported that Gowdy was no longer being considered a part of the legal team due to scheduling conflicts as well as conflicts with his current law firm.

Monday, 6:40 p.m.: Michael McKinley, a former senior adviser to Secretary of State Mike Pompeo, will appear for a transcribed interview before the committees on Wednesday morning, two sources familiar with the matter told CBS News.

Laura Cooper, the deputy assistant secretary of defense for Russia, Ukraine and Eurasia, will also now appear before the committees on Friday, an official working on the impeachment inquiry said.

McKinley, a career diplomat and one of Pompeo’s top aides, resigned his post last week. — Rebecca Kaplan and Nancy Cordes

​This week’s deadlines for subpoenas

Monday, 3:23 p.m.: This week will see a slew of deadlines for subpoenas for documents that Democrats have issued over the past two weeks:

Monday, 12:08 p.m.: Florida Republican Matt Gaetz, a member of the House Judiciary Committee, went to Fiona Hill’s deposition this morning and was asked to leave by House Intelligence Committee Chairman Adam Schiff because he is not a member of the Intelligence, Oversight or Foreign Affairs Committees.

After seeking a ruling from the parliamentarian, who apparently ruled in Schiff’s favor, Gaetz left. — Rebecca Kaplan

Monday, 10:30 a.m.: The Justice Department is looking into whether Rudy Giuliani, Mr. Trump’s personal attorney, violated foreign lobbying regulations, CBS News has confirmed. Federal law, specifically the Foreign Agents Registration Act or FARA, requires U.S. citizens to disclose any lobbying on behalf of foreign clients to the Justice Department. This investigation is tied to the prosecution of Lev Parnas and Igor Fruman, who were arrested last week, but Giuliani is the focus of the foreign lobbying probe.

Parnas and Fruman, who had been helping Giuliani in his efforts to investigate Joe and Hunter Biden, have been accused by prosecutors in the Southern District of New York of attempting to funnel foreign money to candidates for federal and state office. — Paula Reid and Kathryn Watson

Tue Oct 15 , 2019
People walk past a branch of Turkish bank HalkBank in Istanbul, Turkey. Chris McGrath | Getty Images Federal prosecutors in New York announced charges on Tuesday against a Turkish bank with ties to a gold trader connected to Rudy Giuliani, accusing the financial institution of a multi-billion dollar scheme to […] 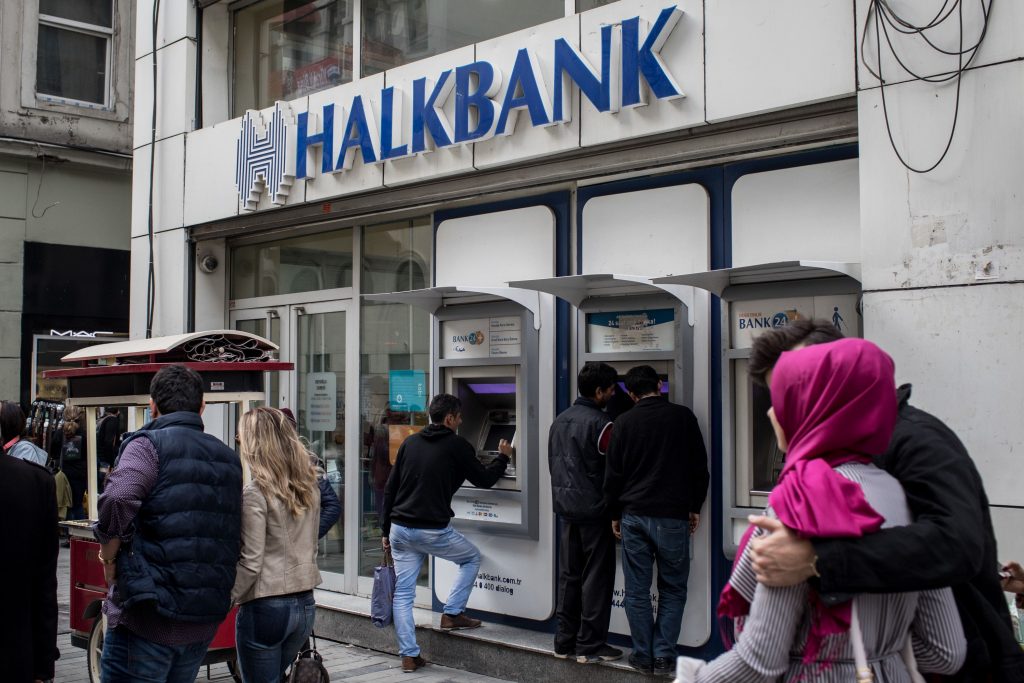