Following a secretive escape last week from Japan to Lebanon, former Nissan chief Carlos Ghosn publicly defended himself Wednesday — for the first time since his initial arrest in November 2018 — against accusations of financial misconduct and misuse of corporate resources.

Ghosn adamantly denied all charges against him and defended his decision to become an international fugitive by fleeing Japan as a necessity to receive a fair trial and “escape injustice.”

“I want to be able to speak, I want to be able to defend myself,” Ghosn told CNBC’s Michelle Caruso-Cabrera following a more than two-hour press conference in Lebanon. “I want a justice system where attack and defense have the same rights, and it’s balanced and let the truth happen. I was in the system where it’s not about the truth, it’s about winning. It’s about confession.”

Regarding his escape from Japan, Ghosn declined to provide specifics, saying he did not want to get anyone who helped him in trouble. The plan reportedly included a former U.S. Army Green Beret and the ex-executive hiding in a music equipment case.

Former Nissan Chairman Carlos Ghosn told CNBC’s Michelle Caruso-Cabrera that he has been “reborn” since escaping from Japan to Lebanon.

“I’m not going to confirm or say anything,” he said. “But I can tell you that it is obviously, you know, you have a lot of anxiety when you are in a period where you are transitioning out of the country but you’re not still out of reach.”

Ghosn said some reports of the cost of his escape have been “very, very generous,” adding you “don’t need that kind of money to be able to organize.”

“Obviously, the simpler it is, the better it is, the more chance you have to be successful,” Ghosn said. “And the more discreet you will be.”

Since arriving in Lebanon, Ghosn said he has been “reborn” and the anxiety and emotions he felt during his escape have diminished by the joy of seeing his family, specifically his wife: “I’m a different man today,” he said.

Ghosn said he did not attempt to contact Greg Kelly, a colleague and alleged co-conspirator who remains in Japan awaiting trial, about escaping with him.

Calling Kelly a “great person,” Ghosn said contact between the two was “forbidden” as a condition of his bail.

Ghosn reiterated previous statements that he believes the charges against him were part of a conspiracy by Nissan executives to stop the well-known executive in further integrating Nissan with Renault.

Wed Jan 8 , 2020
The United States experienced another year of extreme weather in 2019, according to the National Oceanic and Atmospheric Administration’s annual U.S. climate assessment. While cold extremes and unusually heavy rains hit the central U.S., heat swelled across the Southeast and it was the warmest year on record in Alaska.  It was […] 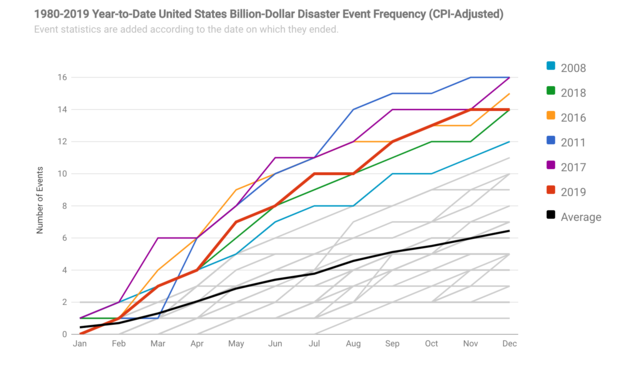