FRANKFURT (Reuters) – Euro zone governments should “get their acts together” and respond to the coronavirus pandemic and its economic fallout in a bold and coordinated way now that the ECB has secured cheap financing for it, two ECB rate-setters said on Friday.

The central bank governors of Finland and Spain revived ideas such as raising cash through a common “safe asset” or via existing institutions of the European Union to finance the response to the outbreak.

“At this critical juncture, it is essential that euro area governments get their acts together and agree to a coordinated European fiscal response,” Finland’s central bank chief Olli Rehn told a press conference.

“There’s a saying: never waste a crisis. Therefore it’s important that euro area governments agree at this critical moment on some kind of a safe asset that could provide sturdy support for financing,” he added.

“Greater ambition and coordination are not just an option; they are a necessity,” he said in a statement.

As they spoke, the head of the European Commission Ursula von der Leyen opened the door to loosening debt rules for member states and issuing common euro zone bonds to cushion the impact of the coronavirus outbreak.

With economic activity curtailed across Europe, infection numbers still on the rise and markets gripped by fear, the ECB set on course to buy 1.1 trillion euro ($1.18 trillion) worth of bonds this year in order to keep yields low.

Yet this won’t save Europe from a recession.

In an interview with Reuters, de Cos said the contraction would be “significant” not only in Spain, one of the European countries most severely hit by the virus, but also globally.

“There’s every reason for this shock to be temporary if we retain our ability to start again,” Villeroy told BFM Business.

(Reporting by Jesus Aguado in Madrid, Anne Kauranen in Helsinki and Leigh Thomas in Paris; Writing by Francesco Canepa in Frankfurt; Editing by Hugh Lawson)

Japan to reopen schools closed for coronavirus after spring recess

Fri Mar 20 , 2020
FILE PHOTO: Students sit apart from each other as they do self-study at an elementary school where the facility was opened for children who cannot stay at home alone while their parents are at work, in Nagoya, central Japan March 3, 2020, in this photo taken by Kyodo. Mandatory credit […] 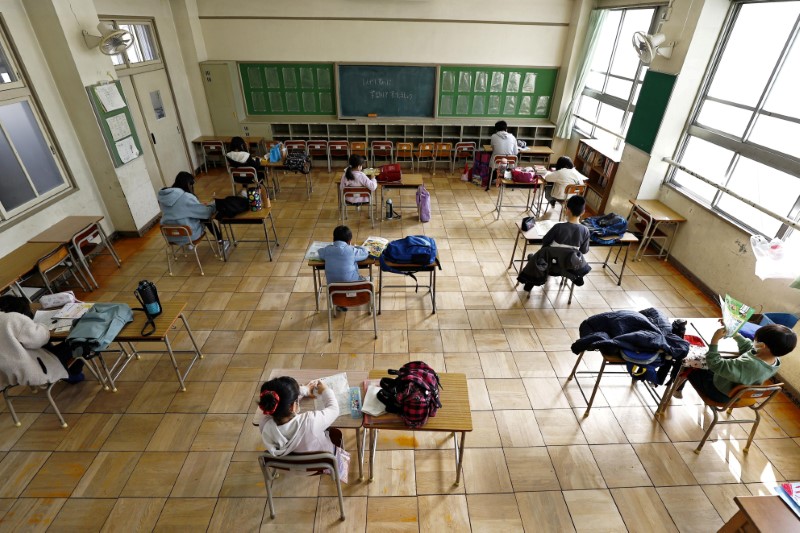