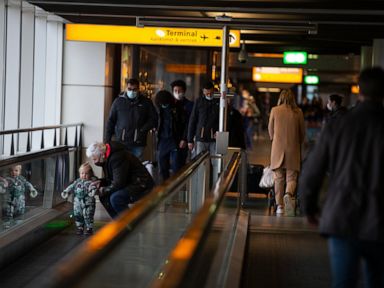 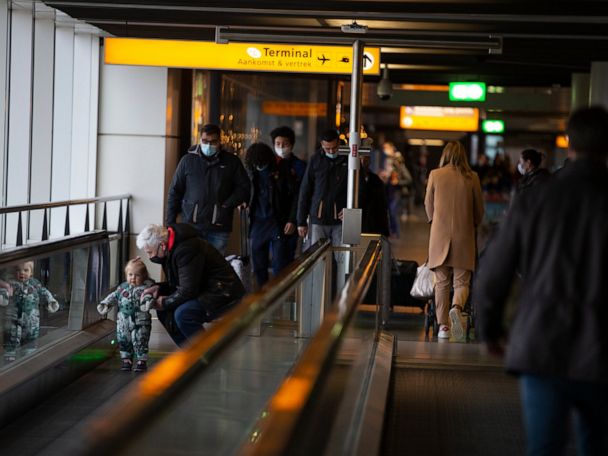 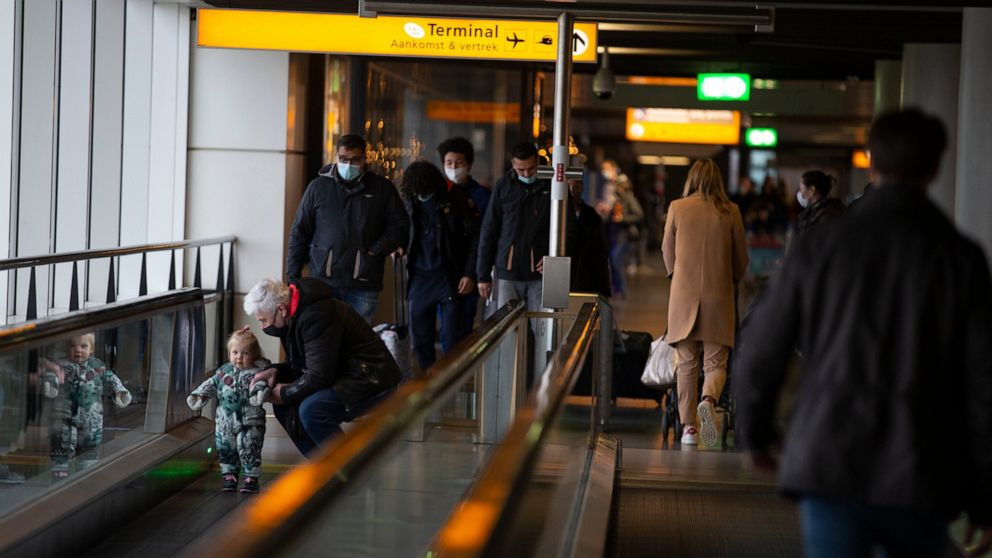 BERLIN — Germany is considering limiting flights from Britain to make sure that a new, allegedly highly contagious strain of coronavirus that is sweeping across southern England does not spill over to Germany, the dpa news agency reported Sunday.

A high-ranking German government official told dpa that restrictions on flights from Britain are a “serious option.”

Belgium and the Netherlands started banning flights from the U.K. in reaction to tougher measures imposed in London and surrounding areas on Saturday by British Prime Minister Boris Johnson.

Johnson said a fast-moving new variant of the virus that is 70% more transmissible than existing strains appears to be driving the rapid spread of new infections in London and southern England.

The German government, which holds the EU’s rotating presidency, is in close contact with its European neighbors on developing situation, dpa reported.

— California hospitals are battling to find beds to house ICU patients amid fears that the exploding coronavirus infection rate will exhaust resources and health care workers.

BRUSSELS — Belgium has joined the Netherlands in banning flights from the U.K. and also banned rail connections in an attempt to make sure that a new strain of coronavirus that is sweeping across southern England does not spill over on its territory.

Belgian Prime Minister Alexander De Croo on Sunday said he was issuing the order for 24 hours starting at midnight “out of precaution.”

“There are a great many questions about this new mutation and if it is not already on the mainland,” he said. He hoped to have more clarity as of Tuesday.

The Netherlands is banning flights from the U.K. for at least the rest of the year.

Both Belgium and the Netherlands were reacting to tougher measures imposed in London and surrounding areas on Saturday by British Prime Minister Boris Johnson.

AMSTERDAM — The Netherlands is banning flights from the U.K. for at least the rest of the year in an attempt to make sure that a new strain of coronavirus that is sweeping across southern England does not reach its shores.

The ban came into effect Sunday morning and the government said it was reacting to tougher measures imposed in London and surrounding areas on Saturday by British Prime Minister Boris Johnson. The Netherlands said it will assess “with other European Union nations the possibilities to contain the import of the virus from the United Kingdom.”

Johnson said a fast-moving new variant of the virus that is 70% more transmissible than existing strains appears to be driving the rapid spread of new infections in London and southern England.

“There’s no evidence to suggest it is more lethal or causes more severe illness,” the prime minister stressed, or that vaccines will be less effective against it.

The Dutch government is already strongly advising its citizens not to travel unless absolutely necessary.

JERUSALEM — Israel on Sunday began its coronavirus inoculation drive, aiming to vaccinate some 60,000 people a day in a bid to stamp out the illness that is once again surging among its population.

The country will first immunize health workers, followed by the elderly, high-risk Israelis and those over 60 years old. Israel says it has secured sufficient doses for much of the country’s 9 million people from both Pfizer and Moderna, whose vaccine U.S. authorities approved this week for emergency use.

With public opinion polls showing many Israelis are reluctant to receive shots right away, Prime Minister Benjamin Netanyahu said he would set a “personal example” and insisted on being the first Israeli vaccinated. He received the shot Saturday night.

Netanyahu called it an “exciting moment” that would put Israel on the path to returning to its normal routines. The country’s health minister also received a vaccine shot.

SEOUL, South Korea — South Korea has recorded more than 1,000 new coronavirus cases for the fifth consecutive day, putting pressure on authorities to enforce the toughest distancing rules that would further hurt the economy.

The Korea Disease Control and Prevention Agency says it’s found 1,097 additional cases over the past 24-hour period, the highest daily tally since the pandemic began. That puts the national caseload at 49,665, including 674 deaths.

About 70% of the new cases come from the densely populated Seoul metropolitan area, which has been at the center of a viral resurgence.

The pace of the spread has already met government conditions for raising social distancing rules to their highest level. But officials have been reluctant to move forward with the measure out of worries for the economy. The new steps would be banning gatherings of more than 10 people and shutting hundreds of thousands of non-essential businesses.

SYDNEY — The outbreak in Sydney’s northern beach suburbs has grown to 70 cases with an additional 30 in the last 24 hours, and authorities say they may never be able to trace the source.

While the numbers are rising, New South Wales Premier Gladys Berejiklian said Sunday there hasn’t been evidence of massive seeding outside the northern beaches community. A new list of cases, however, shows the virus had spread to greater Sydney and other parts of the state.

The government has imposed a lockdown in the area until Wednesday. Residents will only be permitted to leave their homes for five basic reasons, including medical care, exercise, grocery shop, work or for compassionate care reasons.

State Chief Health Officer Kerry Chant said that contact tracers are yet to locate patient zero, but an extensive investigation is underway.

HOUSTON — Texas on Saturday surpassed 25,000 deaths from the coronavirus pandemic, the second-highest total in the country.

Cases of COVID-19 and virus-related hospitalizations continue to rise in the state. On Saturday, the state reported 9,796 people hospitalized with the virus, an increase of nearly 23% over the last month.

Officials reported 12,914 new cases on Saturday. That comes two days after the state set its one-day record of new cases — 16,864 — on Thursday.

The increase in cases and hospitalizations comes as state health officials announced Friday that Texas will receive 620,000 more doses of COVID-19 vaccines over the next week. More than 224,000 doses of the Pfizer vaccine have already been delivered in Texas.

The statewide totals increased to 128,930 cases and 2,155 as seven-day rolling averages for daily new cases dropped and daily deaths rose over the last two weeks.

A pandemic-high 48 daily deaths were reported Thursday as Gov. Michelle Lujan Grisham said daily deaths could grow even higher over the holidays.

ANCHORAGE, Alaska — The 2021 Iditarod Trail Sled Dog Race will be about 140 miles (225 kilometers) shorter than normal as a result of complications stemming from the coronavirus pandemic.

Race officials announced Friday that teams will no longer embark on a 1,000-mile journey to Nome but instead will take a roughly 860-mile (1,380 kilometer) loop that starts and ends in Willow.

Every musher must also test negative for the coronavirus before the race begins. They will also be tested again during the race. Facial coverings and social distancing will be mandated at checkpoints.

The race is scheduled to begin on March 6.

ATLANTA — U.S. health officials closely tracking possible side effects of the first authorized COVID-19 vaccine say they have seen six cases of severe allergic reaction out of more than a quarter million shots given.

The Centers for Disease Control and Prevention said more than 272,000 shots of the Pfizer vaccine were given nationwide as of Saturday morning. The half-dozen cases of allergic reaction were reported as of Friday night, and included one person with a history of vaccination reactions.

Health officials are keeping close watch for such side effects.

U.S. vaccine recipients are supposed to hang around after their injections in case signs of an allergy appear. The CDC says all cases occurred within the recommended observation window and were promptly treated.

The numbers were discussed at a meeting of a committee that advises the CDC on vaccines. The group on Saturday endorsed Moderna’s COVID-19 vaccine, which was granted emergency authorization on Friday.

BIRMINGHAM, Ala. — The United States added a record of nearly a quarter million coronavirus cases in the past day.

Health experts says the record could increase as cases surge in parts of the country and health care systems struggle to keep up.

Along with 249,709 new cases, there were an additional 2,814 reported deaths nationwide in the past 24 hours. That pushed the confirmed U.S. death toll past 313,000, according to researchers at Johns Hopkins University.

Health officials are concerned about future cases brought on by travel over Christmas and New Year’s.

PHOENIX – Arizona residents are being told to “shrink their circles” of personal contacts to help the state’s health care system handle coronavirus cases.

State and local governments need to do more to reduce the coronavirus’ spread, because one of Banner Health’s hospitals is using a refrigerated truck trailer to augment its now full morgue, says Dr. Marjorie Bessel, the hospital chain’s chief clinical officer.

Only 8% of all beds and intensive care unit beds were available, according to the state’s coronavirus dashboard.

WASHINGTON — With coronavirus numbers setting new daily records, the nation’s capital is temporarily suspending all indoor dining in restaurants over the holidays.

The District of Columbia will remain in phase two of its reopening plan, and the government described the move as a “holiday pause.”

The order also extends Washington’s public health emergency through March 31 and orders all museums to close. The entire Smithsonian network of museums, which includes the National Zoo, already shut down voluntarily in late November.

WASHINGTON — An Army general in charge of COVID-19 vaccines apologized Saturday for “miscommunication” with states on the number of early doses delivered.

Gen. Gustave Perna’s remarks came a day after a second vaccine was added in the fight against the coronavirus. Governors in more than a dozen states says the federal government has told them next week’s shipment of the Pfizer-BioNTech vaccine will be less than originally projected.

“I want to take personal responsibility for the miscommunication,” he said. “I know that’s not done much these days. But I am responsible. … This is a herculean effort and we are not perfect.”

Perna says the government now is on track to get approximately 20 million doses to states by the first week of January, a combination of the newly approved Moderna vaccine and the Pfizer-BioNTech vaccine. He says 2.9 million Pfizer-BioNTech doses have been delivered so far.

The coronavirus has killed more than 313,000 people in the U.S., the highest death toll in the world.

First shipments of Moderna COVID-19 vaccine begin to roll out

Sun Dec 20 , 2020
Initial shipments of the second COVID-19 vaccine authorized in the U.S. left a distribution center Sunday, a desperately needed boost as the nation works to bring the coronavirus pandemic under control. The trucks left the factory in the Memphis area with the vaccine developed by Moderna Inc. and the National […] 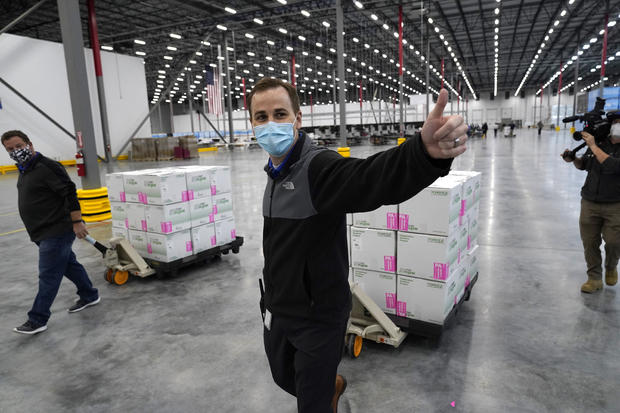