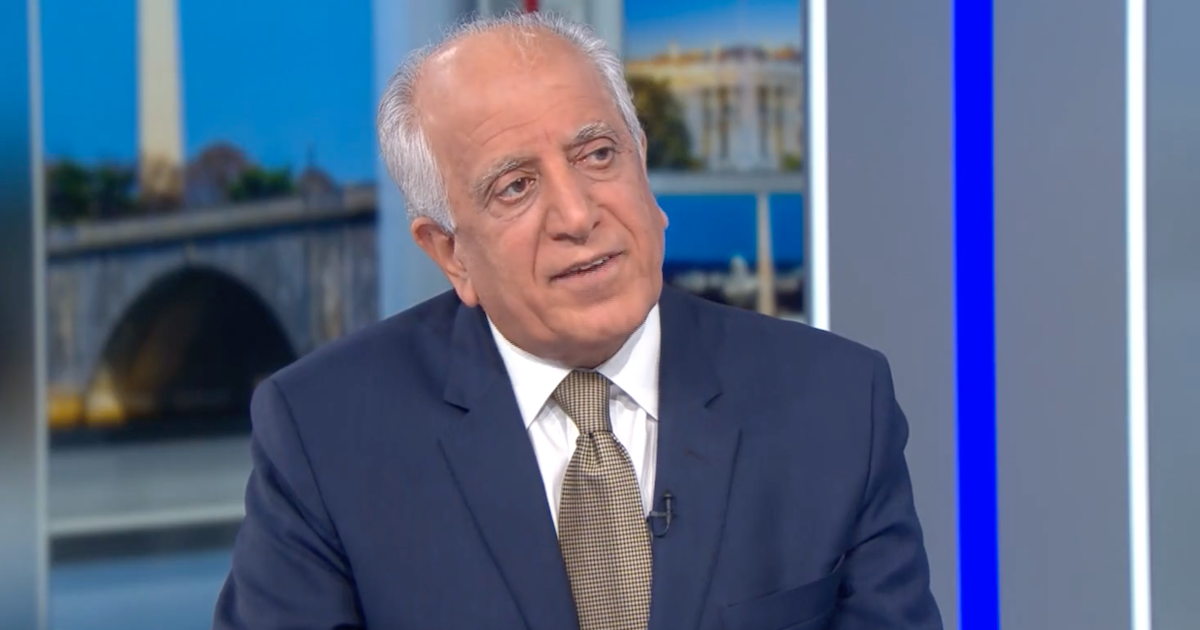 In his first interview since resigning as the U.S.’s chief negotiator with the Taliban, Ambassador Zalmay Khalilzad strongly defended the deal he negotiated to withdraw U.S. troops from America’s longest war, but told “Face the Nation” moderator and CBS News chief foreign affairs correspondent Margaret Brennan that he objected to the direction of the Biden administration’s current Afghanistan policy.

“One reason I left the government is that the debate wasn’t really as it should be based on realities and facts of what happened, what was going on and what our alternatives were,” Khalilzad told Brennan.

The long-time diplomat refrained from directly criticizing President Biden, whom he considers to be a friend. However, he made clear that the withdrawal that he negotiated, known as the Doha Agreement, was meant to be “conditions-based” rather than driven by a calendar date.

Mr. Biden has publicly argued that he inherited a deal that locked him into a withdrawal date or face the undesirable option of deploying more U.S. troops in order to regain leverage against the Taliban. The February 2020 agreement was a package deal that stipulated U.S. troops would withdraw within 14 months (Mr. Biden slid it to 18 months) but also said that a new Afghan government would be formed and a ceasefire implemented. The Taliban also committed not to host al Qaeda.

His critics have argued he gave too much and got too little. That he was too accommodating to the Taliban. That he ignored necessary human rights guarantees. That his attempts to negotiate a “peace deal” were little more than a diplomatic fig leaf to a U.S. retreat from a losing war, one that the American people had lost the political will to fight.

Khalilzad refuted accusations that he had been misled by the Taliban’s political leaders while their fighters made significant advances on the ground.

“I don’t allow people to mislead me. I do my homework,” he said. “This was not Zal Khalilzad alone doing this. I had the military, the intelligence, everyone with me.”

He also declined to criticize former President Trump, who had hired him back in 2018 to negotiate the withdrawal, and pointed out that three Administrations in a row — “way above my pay grade” — decided an Afghanistan withdrawal was necessary because the U.S. was “not winning the war.” By the time Khalilzad was appointed negotiator, the Taliban had regained control or contested some 60% of the country.

“I was asked by the former president to negotiate our withdrawal from Afghanistan and get commitments from the Taliban (on) the terrorism front,” he said, referring to Mr. Trump. “That has been achieved. We are out. Our longest war is over.” He added that the end to U.S. involvement might ultimately have saved lives on a relative basis: “Fewer people die now in Afghanistan than died then.”

Khalilzad, the U.S.’ special representative for Afghanistan reconciliation for three years and two administrations, had a frayed relationship with Afghanistan’s President Ashraf Ghani, who resented having been excluded from U.S. negotiations with the Taliban and was resistant to U.S. entreaties.

In the interview, Khalilzad argued that had Ghani not departed Kabul abruptly on August 15, a negotiated transition might have ultimately allowed a more orderly transition and perhaps kept open the possibility for the U.S to keep some presence in Afghanistan. Ghani fled the presidential palace by helicopter, fleeing to nearby Uzbekistan as Taliban forces entered the capital city.

Khalilzad said he had struck an agreement on August 14, only the night before, with the Taliban and the Afghan government to do a two-week negotiation to create some kind of power-sharing arrangement, but then “President Ghani made the choice that he did, that caused the forces to disintegrate in Kabul.”

Asked whether it was diplomatic malpractice for former Secretary of State Mike Pompeo and current Secretary of State Antony Blinken not to hold Ghani’s hand to walk him throughout months of diplomacy leading up to the scheduled U.S. withdrawal, Khalilzad was careful to avoid direct blame of either Pompeo or Blinken.

“I believe in retrospect, my judgment is that we could have pressed President Ghani harder,” he acknowledged.

The speed at which the Afghan military and government collapsed took even the U.S. intelligence community by surprise, as 20 years of war culminated in desperate Afghan civilians clinging to the underbelly of military planes taking off from the Kabul airport, and the killing of 13 U.S. service members and 170 Afghan civilians by an ISIS-K suicide bomber.

“I’m not saying it was an orderly withdrawal. This was an ugly and final phase. No doubt about it could have been a lot worse,” Khalilzad argued.

Earlier this month, the U.S.’ most senior military leaders traced the collapse of the Afghan military back to the 2020 Doha Agreement and claimed it fatally weakened them by hurting morale, which ultimately led to the melting away of their 20-year resistance to the Taliban fighters.

Since the Taliban victory and U.S. withdrawal, the Biden administration has taken hesitant steps to build a relationship with the new government in Afghanistan, and kept much of the contact to humanitarian aid and counterterrorism. In mid-October, the deputy CIA Director David Cohen led a delegation to meet with the Taliban.

Asked why he had not crafted a formal arrangement with the Taliban to counter-terrorist groups such as ISIS and al Qaeda as part of the withdrawal agreement in 2020, Khalilzad argued that there had indeed been a framework for one including elements that still remain secret.

“We have a set of agreements with them — some of which have not been released yet — on what they will do on the terrorism front. We hold them accountable to those agreements” Khalilzad said without detailing the provisions.

The framework that Khalilzad referred to was dependent on the Taliban becoming part of a power-sharing government as part of the failed negotiated settlement he was trying to orchestrate before the Taliban took control of Afghanistan by force. He had hoped that a new government that included the Taliban, but was not exclusively run by that group, would have permitted the U.S. to keep a residual counter-terrorism force in Afghanistan.

“If the president at that time wanted to have a residual force, that had to be negotiated, or would be negotiated with that government after a political settlement,” he said.

Biden administration officials privately describe the deal Khalilzad negotiated as flawed and argue that they had little choice but to accept it. Yet publicly Blinken described Khalilzad’s work as “vital” when he asked him to stay on in January 2021.

Asked whether he believes the Taliban are capable of living up to their agreements let alone governing the country, Khalilzad acknowledged the fact that the Taliban suffers from being made up of factions, some of which are led by more “hardline” commanders. But, he argued, ultimately they need to work it out. Khalilzad wrote in his resignation letter, “It is not the final chapter. Even the Taliban describe themselves as an interim government.”

In the meantime, he told “Face the Nation” the U.S. has Afghanistan’s frozen bank assets as leverage. “There should be no release of funds,” he suggested. “Their economy could collapse, and in that collapse a new civil war could start.” The U.S. has frozen nearly $9 billion assets belonging to the Afghan central bank and has said all aid will be channeled via the UN and other humanitarian organizations. But the UN has said not enough aid is getting through and that 1 million children in Afghanistan could die from malnutrition.

“So the Taliban have some difficult, important choices to make, and I think they are debating that themselves. I believe the best approach is to engage with them, with a clear list of what it is that we want in exchange for what they would like to see,” Khalilzad suggested. “There has to be a step-by-step agreement and a roadmap that both sides agree to.”

Some of the members who have come to power in the new Taliban government are designated terrorists, such as their new head of security and acting interior minister Sirajuddin Haqqani, who remains one of the leaders of the infamous Haqqani Network and has a $10 million FBI bounty on his head.

“Haqqani’s breaking to our satisfaction from Al-Qaeda has to be a pre-condition—a condition for progress on the agenda that they have, including the issue of unfreezing the bank accounts,” Khalilzad said.

Asked if he knows where the leader of al Qaeda, Ayman al-Zawahiri, is living, Khalilzad said, “The report that I have seen indicates he could be in Afghanistan or adjacent territories.” But he added the Taliban members whom he “dealt with” do not know al-Zawahiri’s whereabouts.

“We are convinced (the Taliban) are not allowing plotting and planning operations by al Qaeda against the United States,” Khalilzad said. At the same time he said that al Qaeda members have become ingrained in Afghan society since the Soviet invasion.

“Some have married Afghans, they have children and grandchildren there. Nevertheless, the Taliban should do more. We should press them to do more on the issue of terrorism,” he said.

Asked about the CIA having said that al Qaeda could reconstitute in as little as a year within Afghanistan, Khalilzad reflected, “Well, our record of predicting things, unfortunately, we need to be a little humble in this regard.”

“I think a big burden is removed from the United States” Khalilzad argued. “The American people should be pleased. Not with the way the final phase happened — we all are unhappy with that — but that the Afghan war is over for the United States.”

Sun Oct 24 , 2021
FILE PHOTO: A woman wearing a protective face mask walks along a deserted city bridge during a lockdown as the state of Victoria looks to curb the spread of a COVID-19 outbreak in Melbourne, Australia, July 16, 2021. REUTERS/Sandra Sanders//File Photo/File Photo October 24, 2021 By Lidia Kelly MELBOURNE (Reuters) […] 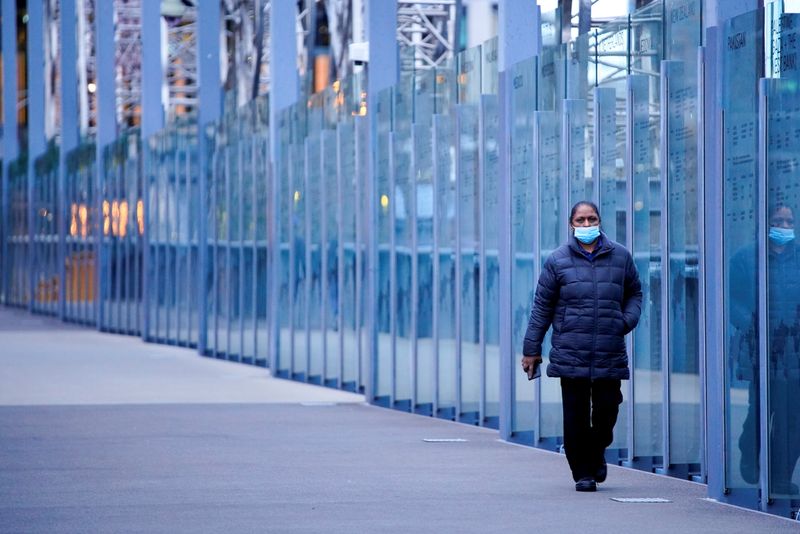