CNBC’s Jim Cramer on Monday projected that the stocks of Ford and General Electric, two manufacturing giants whose stocks are beyond their golden days on Wall Street, will be able to soon cross a key threshold.

The two American companies, both of which hold historic relevance to the country, received fresh buy ratings from analysts in recent days who project upside in both their troubled businesses and their stocks.

While GE tanked below $10 on the market during the meltdown earlier this year, Ford shares have not traded above that level in over a year.

Cramer thinks the car manufacturer will be the first to break back through.

“Longer term, I think both Ford and General Electric are headed back to the double digits,” the “Mad Money” host said, “but if you only want one of these Robinhood favorites in your portfolio, I would go with Ford.”

The investment firm Benchmark on Monday gave Ford a buy rating, up from hold, forecasting momentum in the new year for the automaker. The stock rose almost 6% on the news to a $7.67 close.

The stock of General Electric, the industrial conglomerate that was once the most valuable company in the world, received a buy call from Goldman Sachs on Friday, citing a bottoming in the company’s performance. The stock is up 2.7% since the day the call was made, settling at $6.83 on Monday.

Both companies have shared a similar downtrend over the years, rotating through multiple CEOs in the last decade, with Ford set to get its third since Alan Mulally departed in 2014.

Cramer blamed their downfalls on strategic errors by management and identified oil prices as a factor in both cases.

Ford made too many small cars in recent years as gasoline prices declined and demand for SUVs and crossovers inclined. The company also had holes in its international business, Cramer noted. Ford stock is down 60% from its peak coming out of the Great Recession in 2011.

General Electric also ran into problems overseas, particularly in acquiring the French power infrastructure company Alstom and later the oil service business Baker Hughes, Cramer pointed out. The company also made out long-term care insurance contracts that were underpriced, leading to problems on the balance sheet, he added.

“Both are great American companies that became long-term losers, steadily falling from grace and seeing their stocks sink to single-digit levels. Both have started to show green shoots, making investors more optimistic about the future for the first time in ages,” Cramer said.

Cramer sees green shoots ahead for both companies, much as the analysts who upgraded their stocks. He expects GE’s aviation business to benefit from a slowly rebounding air travel market and from the prospect of Boeing getting the troubled 737 Max airplanes, for which GE is a supplier, back in the air soon. Ford can benefit from a rebounding car market, he added.

In a race to the $10 level, Ford may have an edge with a lower price-earnings multiple, which is the number of times investors are willing to pay up for a share in a company’s earnings. GE is also more expensive on a cash-flow basis, Cramer said.

“In short, Ford is a much clearer value play, and I also think it has the better story. Sure, GE’s core aerospace market will come back eventually, but Ford’s core auto market is coming back now, and the F-150 is going to go electric in a couple years,” he said. “Plus, Ford’s got more momentum, and it’s also much closer to the finish line.”

Mon Oct 12 , 2020
Judge Amy Coney Barrett’s confirmation hearings are set to enter into their next phase on Tuesday, with the 48-year-old nominee due to answer questions from the Senate Judiciary Committee in person for the first time since her nomination last month. Barrett is expected to take questions about her past statements […] 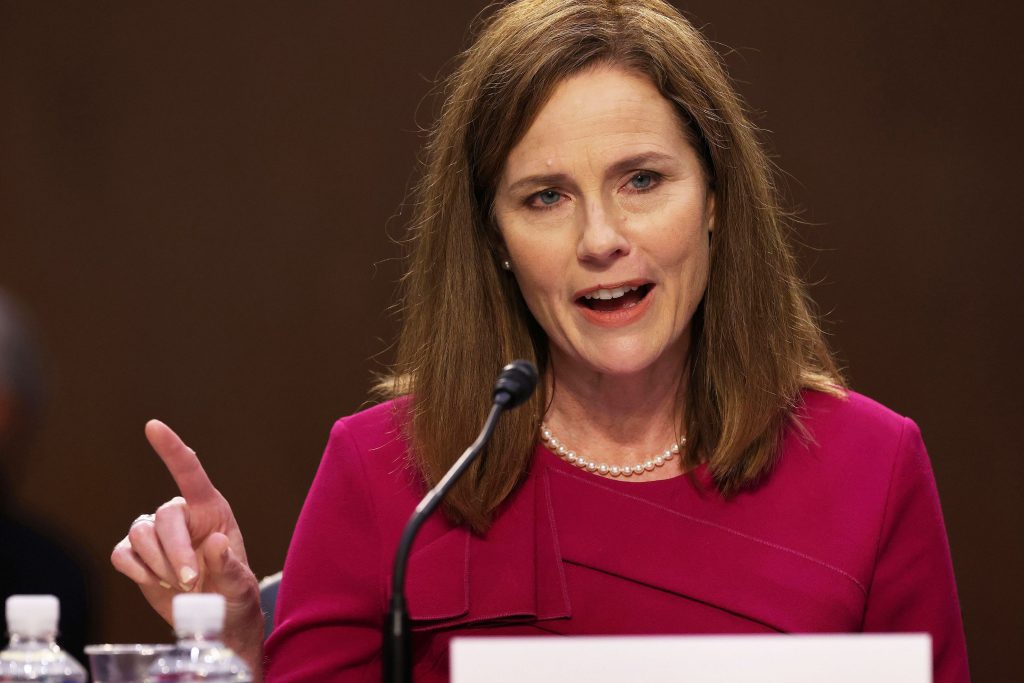