The inside of a Walgreens-operated pharmacy is seen at a Cisco health clinic at Cisco Systems in San Jose, California, U.S., March 22, 2018. Picture taken March 22, 2018. REUTERS/Elijah Nouvelage

The company is among a handful of large American employers who are getting more deeply involved in managing their workers’ health instead of looking to insurers to do it. Cisco last year began offering its employees a plan it negotiated directly with nearby Stanford Health medical system.

Under the plan, physicians are supposed to keep costs down by closely tracking about a dozen health indicators to prevent expensive emergencies, and keep Cisco workers happy with their care. If they meet these goals, Stanford gets a bonus. If they fail, Stanford pays Cisco a penalty.

At the center of it all is a spacious clinic inside Cisco’s San Jose campus, the first point of contact for many employees and their families. They often see Dr. Larry Kwan, a Stanford Health general physician who rubs shoulders with workers in the cafeteria and company gym.

Cisco said costs for Stanford plan patients are 10 percent lower than conventional coverage still used by most of its employees. Chipmaker Intel Corp told Reuters it is saving 17 percent on its workers enrolled in a similar plan, known as Connected Care. Aircraft manufacturer Boeing Co and Walmart Inc, the world’s largest retailer, have likewise hammered out health plans directly with providers.

The movement is small, just a few very large U.S. corporations that have signed up tens of thousands of workers so far. Their early efforts show the challenges of changing behaviors among patients and doctors.

But they speak volumes about corporate America’s frustration with inexorably rising medical costs and the traditional insurers that sell them coverage.

“Before they were simply saying ‘Okay, our vendor is going to help us with this,’” said John Jackson, who handles corporate programs like Cisco’s for Stanford Health. “Many are no longer willing to do that.”

Corporations help pay for healthcare for more than 170 million Americans, in most cases working with an insurer to handle everything from the price of treatments to medical claims.

These employers will spend an estimated $738 billion on health benefits in 2018, a figure that has been rising about 5 percent annually in recent years, according to federal data.

Other big firms are watching closely. Amazon.com Inc, JPMorgan Chase & Co and Berkshire Hathaway Inc said in January they will form an independent company to improve healthcare for their roughly 750,000 U.S. employees, prompting speculation that they would displace health insurers and other industry “middlemen”.

Amazon and partners say they will use big-data analysis and other high-tech tools to improve care and cut wasteful spending. The trio will study the new plans coming from Intel and other pioneers, a source close to the venture told Reuters.

If they do, they will find plenty of hurdles. Reuters interviews with executives at Cisco, Intel and Boeing and their health partners revealed similar challenges.

Chief among them is habit. Many workers will not stray from conventional plans because they like their doctors or worry about access to the best specialists.

To boost enrollment, all three companies have dangled sweeteners such as extra money for health savings accounts or lower monthly premiums and co-pays. The approach also requires employers to take a more hands-on role.

“It’s not something that you just turn the switch and not manage,” said Katelyn Johnson, Cisco’s senior integrated health manager for global benefits.

Cisco’s experiment began in 2008 when it opened the campus clinic for all of its employees there. Designed like a spa, the facility offered primary care in new-age sounding treatment areas: body, mind, heart and spirit.

The savings were notable: about 30 percent compared to an offsite doctor’s office. Cisco later brought in Stanford to develop a full-blown medical plan, which took effect in 2017. Stanford operates the clinic and provides more specialized services through Stanford University’s medical system.

Like a health maintenance organization, the plan requires enrollees to stick to a closed network of doctors. There is emphasis on primary care and fewer referrals to specialists. Treatment for back pain, for example, often begins with physical therapy at the clinic.

Cisco also mandates that Stanford track a dozen health measures, including glycemic levels for diabetics and blood pressure for those with hypertension.

Johnson said fewer than 1,000 people are enrolled, below Cisco’s goal of 1,300 for 2018. The plan has yet to make a dent in Cisco’s $500 million annual healthcare tab, which has been rising by 3 percent to 4 percent in recent years.

Still, Cisco is encouraged enough by the savings that it may expand the program to the company’s second-largest U.S. center, in North Carolina’s Research Triangle Park.

“What we were doing in the past wasn’t really working,” Johnson said. “So this model … is worth it.”

CHIPPING AWAY AT CHALLENGES

Experts warn Cisco’s approach is not suitable for most employers.

For starters, companies need thousands of employees in one place, usually a city, said David Muhlestein, Chief Research Officer at healthcare consultancy Leavitt Partners in Washington D.C. Then their healthcare partner needs to be committed to improving patient health, rather than just offering a discount to win a big client.

“There are not a ton of providers who are really well positioned to make those changes,” Muhlestein said.

Santa Clara, Calif.-based Intel says it has found such partners since it launched its Connected Care health plan five years ago. About 38,000 employees and dependents are now enrolled in Arizona, California, New Mexico and Oregon.

Technology is critical to curbing costs. In Oregon, patients are encouraged to use video conferencing to speak with physicians when appropriate. At $49, the cost is one-third of an office visit.

Jennifer Leo, a 41-year old Intel project manager in Hillsboro, Oregon, chose Connected Care mainly because it covers 100 percent of her husband’s insulin, a drug whose U.S. retail price has more than doubled over the past five years.

Hospital network Providence Health & Services tracks her husband’s condition closely. But Leo said she, too, got personal attention when she came down with a sinus infection on a weekend.

She booked a quick video appointment with a doctor, who prescribed an antibiotic. The next day, the office of her primary care physician reached out to “check that everything got taken care of,” Leo said.

And it has curbed costs and boosted patient health, she said. Last year, for example, 78 percent of diabetics on the plan had their sugar levels under control, up from 69 percent in 2016, Mitchell said. Spending on people with the most complex health conditions was about 10 percentage points lower than on those with comparable issues outside the plan.

Still, Intel employees will sometimes ask Mitchell for help when they cannot see specialists quickly enough. In some cases, she will intervene and call the health system directly to make it happen.

“There are thousands of doctors in these networks. We’re not trying to act like it’s perfect every single time,” Mitchell said.

Boeing, too, has hit some snags with plans it negotiated directly with hospitals in four states covering 15,000 employees plus family members.

Doctors have willingly prescribed cheaper generic drugs, says Boeing global healthcare head Jeff White. But getting them to commit to, say, physical therapy first before scheduling a costly knee replacement has been harder, he said.

White said direct arrangements have boosted quality and saved Boeing money; he declined to provide exact figures. The aircraft maker spends about $2.4 billion annually on healthcare for more than 120,000 U.S. workers and their dependents.

Some healthcare experts point to the inherent conflict for providers: If they prevent expensive health crises through better care, they also lose out on more profitable services, such as hospital admissions.

“That’s the challenge of trying to ask the health system to save money,” said Jack Hoadley, a health policy expert at Georgetown University.

Mon Jun 11 , 2018
Shares of PG&E fell more than 4 percent Monday after Cal Fire blamed the electric utility’s equipment for several major Northern California wildfires in October that resulted in fatalities and the loss of thousands of structures. It comes as there are discussions going on in the state legislature to create […] 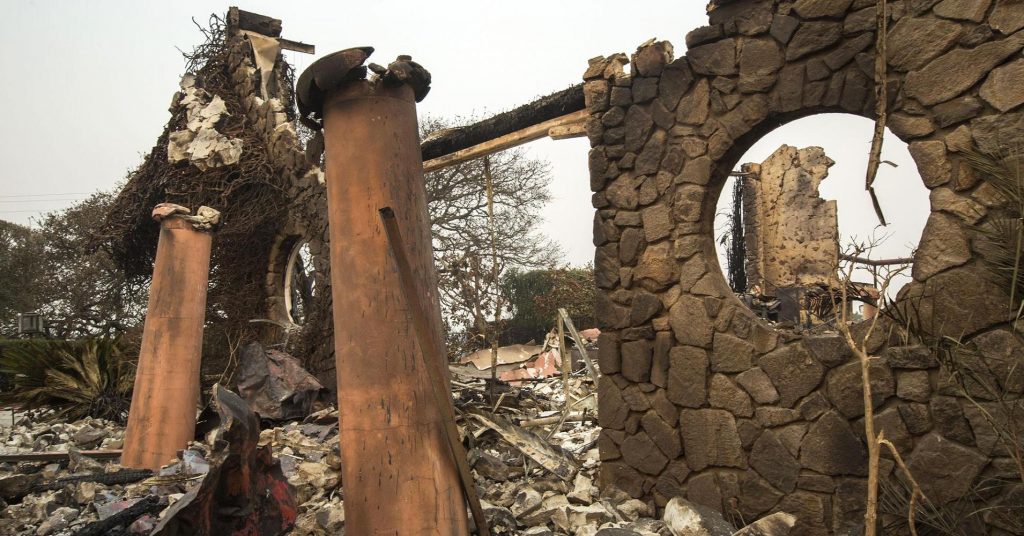