The Federal Reserve opted not to raise interest rates during its policy meeting this week and pledged that future moves will be done patiently and with an eye toward how economic conditions unfold.

In a statement Wednesday, the central bank voted unanimously to hold its policy rate in a range between 2.25 percent and 2.5 percent.

The decision came along with a separate statement on the Fed’s balance sheet indicating that policymakers will consider adjusting the reduction of the central bank’s bond portfolio if conditions warrant. Officials in that statement also said they expect to operate with “an ample supply” of bank reserves, an indication that the balance sheet will remain sizeable once its reduction is complete.

In a move that represented a divergence from policy of the past several years, the Fed dropped language that more rate hikes likely would be warranted – “further gradual increases,” as stated following the December meeting – and said it was adopting a more cautious approach.

“In light of global economic and financial developments and muted inflation pressures, the Committee will be patient as it determines what future adjustments to the target range for the federal funds rate may be appropriate to support these outcomes,” the statement said.

Stocks jumped in reaction to the new statements from the Fed. The Dow Jones Industrial Average jumped 450 points to a new high for the day shortly after the afternoon announcements.

The move comes following a tumultuous period that began in early October.

During a question-and-answer session Oct. 3, Fed Chairman Jerome Powell said the central bank was a long way from adopting a neutral rate of growth. The remark jarred Wall Street and sent markets into a spiral in which major averages briefly hit bear market territory.

Powell again irked investors in December when he said the Fed’s program to reduce the bond holdings on its balance sheet was on “autopilot.”

The committee lowered its assessment of economic growth from “strong” to “solid” and noted that its inflation gauges “have moved lower in recent months.”

The statement also removed the “balance of risks” portion in which the committee sought to quantify the chances of economic growth above or below forecasts.

Also, the officials addressed the balance sheet issue, something that had come up before mostly in the minutes following FOMC meetings.

The committee issued a separate three-paragraph statement noting that “it is appropriate at this time to provide additional information regarding its plans to implement monetary policy over the long run.”

The Fed’s balance sheet consists mostly of a mix of Treasurys and mortgage-backed securities which it purchased in an effort to lower long-run rates and stimulate the economy during and after the financial crisis. At its peak, the balance sheet ran to $4.5 trillion after being less than a $1 trillion before the stimulus program began.

Starting in October 2017, the Fed began allowing a capped level of proceeds from the securities to roll off each month while reinvesting the rest. Fed officials had anticipated the rolloff to proceed with little market impact, but investors have grown skittish over “quantitative tightening” as opposed to easing, since.

At this week’s meeting, the FOMC made clear that it was willing to reconsider the program should conditions warrant, and is not on autopilot as Powell had suggested.

The statement closely reflected language from a policy normalization document in mid-2017, but the decision to separate it out into its own document stood out.

“The Committee is prepared to adjust any of the details for completing balance sheet normalization in light of economic and financial developments,” the statement said.

Moreover, the statement said the Fed “would be prepared to use its full range of tools, including altering the size and composition of its balance sheet, if future economic conditions were to warrant a more accommodative monetary policy than can be achieved solely by reducing the federal funds rate.”

The latter part of the statement is notable in that Fed officials have always stressed the benchmark funds rate as the key tool for policy.

Wed Jan 30 , 2019
White House National Security Adviser John Bolton warned bankers, brokers and traders not to deal in Venezuelan commodities that are being “stolen” from the country’s people by the “Maduro mafia” on Wednesday, after the Trump administration announced sanctions on Venezuela’s state-owned oil company this week. Continue Reading Below As the poverty-stricken […] 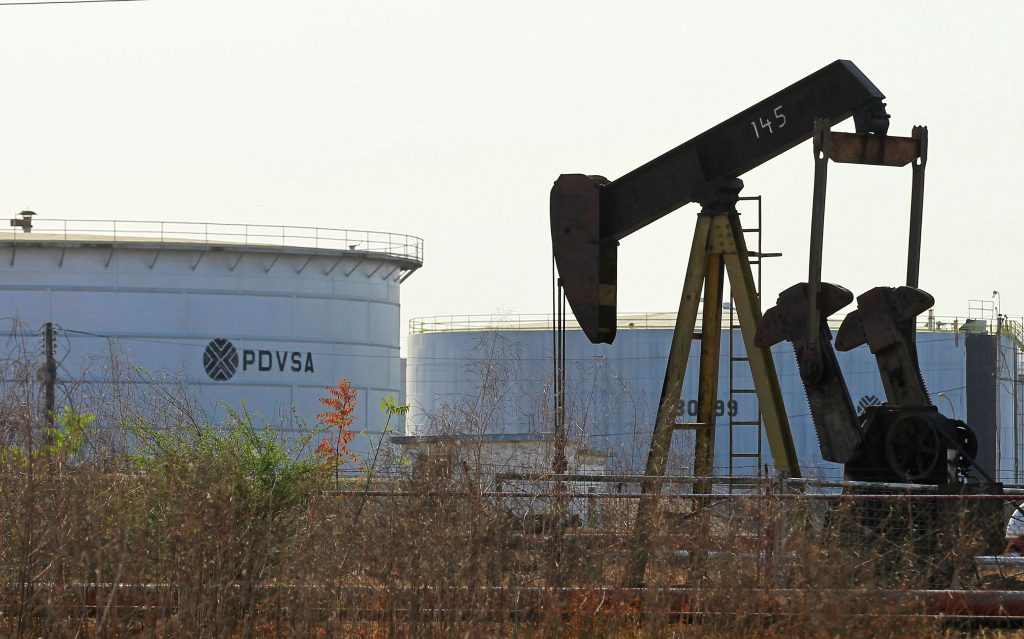