Former UBS Chairman Robert Wolf weighs in on the stock market’s reaction to the presidential election.

Fed Chairman Jerome Powell is the clear winner as the 2020 election results hang in the balance.

“The market has been correlated to the Fed. The Fed’s going to continue to ease whoever the president is,” said Robert Wolf, former UBS Group Americas chair and a FOX Business Democratic contributor. “I think the markets will do pretty well.”

Powell, whose terms ends in February 2022, began the Fed’s two-day meeting on Wednesday. The central bank will announce its interest rate decision Thursday.

Traders are expecting policymakers to hold rates near record lows, according to the CME Group’s FedWatch tool. Powell has reiterated in recent weeks that policymakers are committed to helping steer the economy through the fragile recovery while urging lawmakers to do their part.

Despite bouts of volatility and pullbacks around the election, the S&P 500 and the Nasdaq Composite are about 4% off record highs while the Dow is less than 5% from its own peak.

Policymakers have since the outbreak of COVID-19 injected $2.3 trillion into the U.S. economy and have shored up lending to Main Street, most recently by lowering the borrowing minimum for small- and medium-sized businesses to $100,000 from $250,000.

Like Wolf, many economists don’t see the Fed’s free-money train slowing down anytime soon as the ripple effects of the pandemic loom large.

“The Fed is unlikely to withdraw support until the economy is much more fully recovered,” wrote Ethan Harris, global economist at Bank of America Securities.

The ADP National Employment report, released Wednesday, showed private employers added 365,000 jobs last month, below the 600,000-650,000 estimate. Unemployment could remain elevated as another round of stimulus remains in limbo amid the election uncertainty.

Friday’s jobs report for November will provide a fresh update with the unemployment rate expected to remain at 7.9%, according to economists.

Along with the Fed’s decision, equally notable will be Powell’s press conference on Thursday. He’ll share the central bank’s outlook for the U.S. economy, and will almost certainly be asked about the outcome of the election.

President Trump, for months, attacked Powell on Twitter and in interviews for keeping interest rates too high. The president softened his tone after Powell, in March, led a rescue of the U.S. economy, injecting trillions in fiscal stimulus as COVID-19 raged.

“I would say that I was not happy with him at the beginning and I am getting more and more happy with him,” said Trump during an exclusive interview with FOX Business last July.  “I think he stepped up to the plate. He’s done a good job.”

Wed Nov 4 , 2020
U.S. stocks climbed on Wednesday, led by tech shares, even as the results of the presidential contest so far failed to yield a clear winner. The Dow Jones Industrial Average jumped 500 points, or 1.8%. The S&P 500 traded 2.8% higher. The tech-heavy Nasdaq Composite popped 3.9% as investors crowded […] 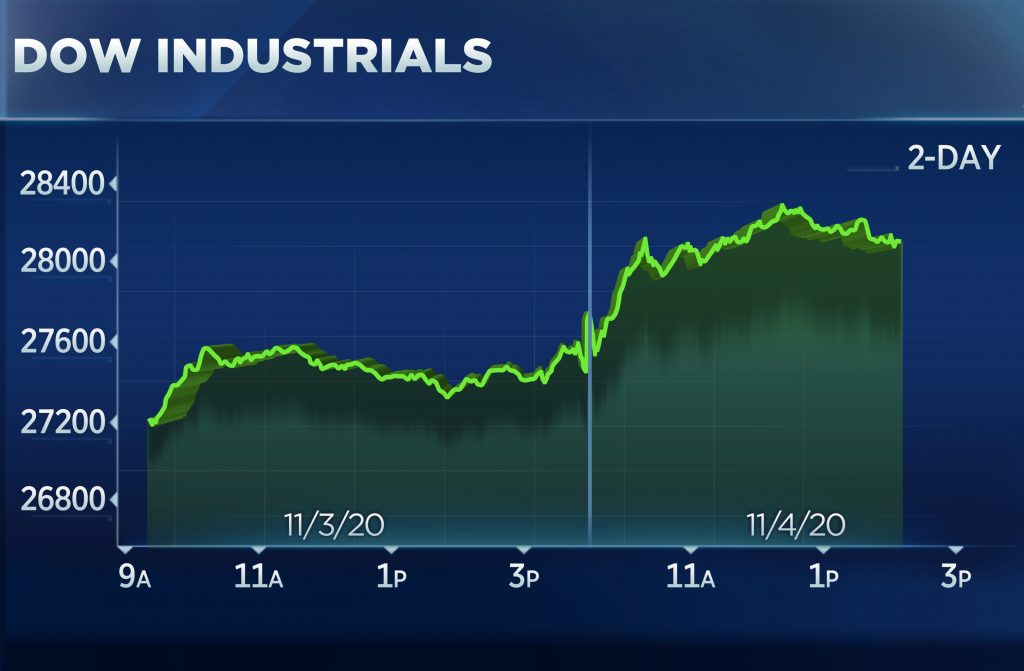