By Jan Wolfe and Makini Brice

WASHINGTON (Reuters) – A federal judge in Texas will hold a hearing on Monday on whether Houston officials illegally allowed drive-through voting and must toss more than 100,000 votes in the Democratic-leaning area.

The lawsuit is one of hundreds fueled by the coronavirus pandemic, which has led to challenges over how people can cast their ballots in the showdown between President Donald Trump and Democratic challenger Joe Biden.

A record 90 million Americans have voted early in the presidential election, data on Saturday showed, even as courts hear arguments over issues including absentee votes, mail-in voting and ballot drop boxes.

Below are some of the biggest legal cases that could shape the outcome of the Nov. 3 election.

U.S. District Judge Andrew Hanen in Houston on Monday will consider whether votes already cast at drive-through voting sites in the Houston area should be rejected.

A lawsuit was brought on Wednesday by plaintiffs including Steve Hotze, a conservative activist, and state Representative Steve Toth. They accused Harris County Clerk Chris Hollins, a Democrat, of exceeding his constitutional authority by allowing drive-through voting as an alternative to walk-in voting during the coronavirus pandemic.

Harris County, home to about 4.7 million people, is the third most populous county in the United States. It currently has 10 drive-through polling sites, which are available to all voters.

Drop boxes have become a partisan flash point, with Democrats promoting them as a safe option for voters unnerved by the COVID-19 pandemic and U.S. Postal Service delivery problems. Republican officials and Trump’s campaign have argued, without evidence, that the boxes could enable voting fraud.

“The plaintiffs complain that limiting early hand-deliveries of mail-in ballots to one office per county requires more travel time for some voters. But this ignores the other options for casting their ballots that these voters have,” the court wrote. The three justices who issued the decision are Republicans.

Texas voters must qualify to vote by mail by, for example, being older than 65, being ill or disabled, or not being present in their voting county during the early voting period through Election Day.

The plaintiffs said they would not appeal the ruling to the U.S. Supreme Court.

A federal appeals court on Thursday said Minnesota’s plan to count absentee ballots received after Election Day was illegal, siding with Republicans in the battleground state.

In a 2-1 decision, the U.S. 8th Circuit Court of Appeals said the deadline extension was an unconstitutional maneuver by the state’s top election official, Minnesota Secretary of State Steve Simon, a Democrat.

“However well-intentioned and appropriate from a policy perspective in the context of a pandemic during a presidential election, it is not the province of a state executive official to re-write the state’s election code,” the majority wrote.

The 8th Circuit sent the case back to a lower court and instructed it to require Minnesota election officials to identify and “segregate” absentee ballots received after Nov. 3.

The litigation is in a preliminarily stage and those ballots would not be counted if a final judgment is entered in the Republicans’ favor.

Officials have said they will not appeal the decision to the U.S. Supreme Court.

The 5-3 ruling left in place a decision by the 7th U.S. Circuit Court of Appeals, which said it was too close to Election Day to make significant modifications to the voting process.

The 11th U.S. Circuit Court of Appeals ruled in September that Florida could require felons to pay fines, restitution and legal fees they owe before they regain their right to vote.

By a 6-4 vote, it reversed a lower court ruling that the measure amounted to an unconstitutional poll tax. Five of the six judges in the majority were appointed by Trump.

Former felons in Florida are more likely to register as Democrats, according to an analysis published last month by the Tampa Bay Times, Miami Herald and ProPublica.

Nearly 900,000 Floridians with felony convictions will be unable to vote in the election because of the decision, according to an Oct. 14 study by the Sentencing Project, a criminal justice reform group.

The U.S. Supreme Court on Thursday left in place North Carolina’s extension of the deadline to receive mail-in ballots.

The state election board, citing potential U.S. PostalService mail delivery delays, opted to allow absentee ballotspostmarked by Election Day to be counted if they arrived up tonine days later.

The justices denied a request from Republican state lawmakers to put on hold an agreement made by state election officials that allowed the extension.

One day earlier, the justices rebuffed a similar request by Trump’s campaign and the Republican National Committee.

The Pennsylvania Supreme Court ruled in September that officials in the closely fought state could accept mail-in ballots three days after the Nov. 3 election, as long as they were postmarked by Election Day.

The U.S. Supreme Court on Wednesday denied a request from Pennsylvania Republicans to review the decision on an expedited basis.

The Supreme Court could still revisit the dispute and rule on the merits of the state court’s ruling after the election.

Justice Samuel Alito, joined by fellow conservatives Clarence Thomas and Neil Gorsuch, said in a written opinion that there was a “strong likelihood” that the Pennsylvania court’s decision violated the U.S. Constitution and should be reviewed before the election.

Republicans did prevail on one key issue at Pennsylvania’s high court. Interpreting a state law, the court said officials must throw out “naked ballots” — ballots that arrive without inner “secrecy envelopes.”

Republicans argued the secrecy sleeves help deter fraud. Democrats have warned the ruling could lead to more than 100,000 votes being thrown out.

(Story refiles to fix date to ‘last month’ in paragraph 29)

Sun Nov 1 , 2020
BRITAIN-PEOPLE-DEPPActor Johnny Depp arrives at the High Court in London, Britain July 28, 2020. REUTERS/Simon Dawson November 1, 2020 By Michael Holden LONDON (Reuters) – Hollywood star Johnny Depp will learn on Monday whether he has won his libel battle with a British tabloid which labelled him a “wife beater”, […] 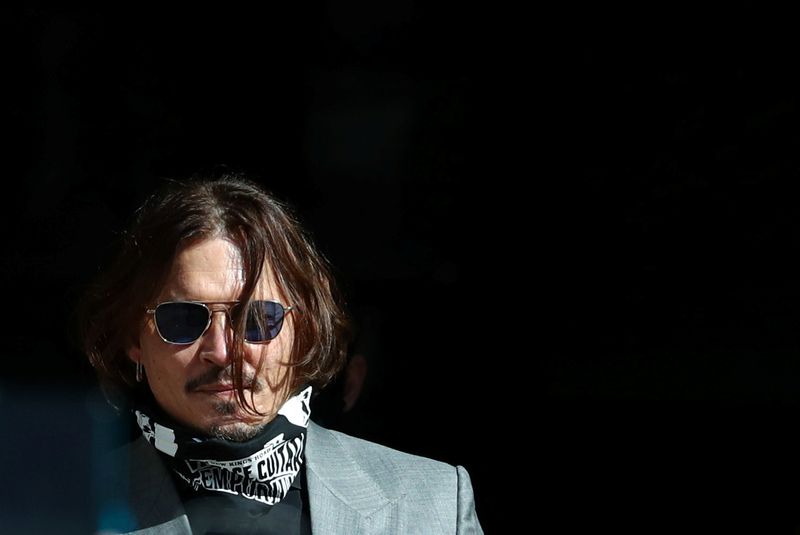