President Donald Trump defended removing Lt. Col. Alexander Vindman from the White House’s National Security Council by claiming that Vindman’s “superior … publicly stated that Vindman had problems with judgement, adhering to the chain of command and leaking information.” But the latter claim leaves a false impression, and the others omit important context.

Trump is referring to Timothy Morrison, who was the NSC’s senior director for Russia and Europe, and Vindman’s direct supervisor for a little more than three months in 2019, from mid-July through the end of October.

Here is a summary of what Morrison did and didn’t say about Vindman, who, like Morrison, listened in on Trump’s July 25 call with Ukraine President Volodymyr Zelensky and testified in the House impeachment inquiry:

Trump tweeted about Vindman on Feb. 8, one day after Trump removed him from his position as the NSC’s director for European affairs. Vindman was originally scheduled to leave his post at the White the House in July, when his detail was set to end.

His early dismissal was described by several congressional Democrats as a form of retaliation for agreeing to be a witness in the House’s impeachment proceedings. Vindman testified that he felt it was “improper for the president of the United States to demand a foreign government investigate a U.S. citizen and a political opponent,” a reference to Trump asking Zelensky to investigate Democratic presidential candidate Joe Biden and his son, Hunter.

National Security Adviser Robert O’Brien, at an event for the Atlantic Council on Feb. 11, denied that the decision to remove Vindman was a retaliatory move. “I can absolutely tell you they were not retaliated against,” O’Brien said, referring to Vindman and his twin brother, Lt. Col. Yevgeny Vindman, who was not an impeachment witness but was also removed from his post as an NSC lawyer and ethics official.

Both men have been reassigned to the Department of the Army, an Army spokeswoman said in a statement to multiple news outlets.

In his Twitter post, Trump also claimed that Vindman “was very insubordinate,” “reported contents of my ‘perfect’ calls incorrectly,” and “was given a horrendous report by his superior.” “In other words, ‘OUT,’” Trump wrote.

….was given a horrendous report by his superior, the man he reported to, who publicly stated that Vindman had problems with judgement, adhering to the chain of command and leaking information. In other words, “OUT”.

An attorney for Vindman released a statement calling the president’s statements “obviously false.”

It’s not true that Morrison said Vindman “had problems with … leaking information,” as Trump wrote.

In his closed-door deposition on Oct. 31, Morrison actually answered “no” when Republican counsel Steve Castor asked him if he ever had “any concerns” that Vindman “might leak something.” Morrison told Castor that others had told him that they believed Vindman may have leaked information, but Morrison was advised by his lawyer not to elaborate further.

Then, during a public impeachment hearing on Nov. 19, Morrison said he “didn’t believe or disbelieve” what he was told about Vindman possibly being the source of White House leaks.

On CBS’ “Face the Nation” on Feb. 9, Republican Sen. Lindsay Graham also suggested that Vindman may have leaked information to the anonymous whistleblower who last August filed a complaint about Trump’s call with Zelensky with the inspector general of the intelligence community.

“He’s never been asked questions, ‘did you leak to the whistleblower?’” Graham said.

Vindman may have never been asked that question, but Vindman has denied divulging information to anyone who was not authorized to have it.

“I never did, never would,” Vindman responded when he was asked during his November public testimony if he ever leaked anything. “That is preposterous that I would do that.”

Vindman said that he gave a readout of Trump’s July 25 call with Zelensky to only two people outside of the NSC, and both, he said, were “cleared U.S. government officials” with a “need to know”: George Kent, deputy assistant secretary for European and Eurasian affairs in the State Department; and another person who worked within the intelligence community, whom Vindman’s attorney advised him not to name.

Vindman also has denied knowing the identity of the whistleblower.

In addition, Morrison said that Hill and others told him they had concerns about Vindman’s judgment, too.

But in her public testimony, Hill clarified that her primary concern was that Vindman, because of his military background, might not be suited for a position that was becoming increasingly political.

“Col. Vindman is a highly distinguished, decorated military officer … and we were evaluating and looking at him in the context of what his future positions would be in the context of the U.S. Army,” she said. “And I was concerned that if, for example, Col. Vindman might decide to leave the military, that perhaps he wasn’t as well suited for something that would be much more political. I did not feel that he had the political antenna to deal with something that was straying into domestic politics. Not everyone is suited for that.”

But, she added: “That does not mean in any way that I was questioning his overall judgment nor was I questioning in any way his substantive expertise. … This was a very specific issue because by June, we saw that things were diverging and he needed a completely different sensitivity.”

And in his public testimony on Nov. 19, Vindman quoted from Hill’s final performance review of him, which he said reads, in part: “Alex is a top 1 percent military officer and the best Army officer I have worked with in my 15 years of government service. He is brilliant, unflappable and exercises excellent judgment.”

It’s also true that Morrison said that Vindman did not follow the chain of command when Vindman reported his concerns about Trump’s July 25 call with Zelensky to lawyers at the NSC instead of Morrison. Morrison said he would have preferred that Vindman came to him first, but it was not unusual for him not to do so because of the way things worked under Hill, who was Vindman’s supervisor before Morrison.

Morrison had only been Vindman’s supervisor for a little more than a week at the time the call between the presidents took place.

“My predecessor had a different style for managing her staff than I do,” Morrison said during his private testimony in October. “She did not have the same view of how reporting through the chain of command should work.”

Vindman testified that he went to NSC lead counsel John Eisenberg first because Eisenberg previously told Vindman that he could come to him with such concerns. Vindman said he earlier had reported concerns about topics discussed during a July 10 meeting with Gordon Sondland, the former U.S. ambassador to the European Union, to the NSC legal team. It was at that point, Vindman said, when Eisenberg told him that he could come to Eisenberg with similar concerns in the future.

When he was asked in his November public hearing why he didn’t go directly to Morrison, Vindman said he tried to but didn’t get a chance to talk to Morrison before Eisenberg advised him not to talk to anyone else about the Trump-Zelensky call.

“I went immediately .. per the instructions from the July 10 incident … to Mr. Eisenberg,” Vindman said. “I attempted to try to talk to Mr. Morrison. That didn’t happen before I received instructions from John Eisenberg to not talk to anybody else any further.”

The White House did not respond when we asked what Trump meant when he tweeted that Vindman “reported contents of my ‘perfect’ calls incorrectly.”

It’s possible Trump was referring to the fact that Vindman went to Eisenberg instead of Morrison with his concerns. The president may have also been referring to a discrepancy about what the White House said Trump and Zelensky discussed in their first phone conversation on April 21, 2019, when Trump called to congratulate Zelensky on winning Ukraine’s presidential election that day.

The White House originally released a statement about the congratulatory call that said Trump mentioned working with Zelensky to “root out corruption” in Ukraine. But a memo of the call that the White House released months later showed that Trump never brought up corruption. At the time, a White House spokesman said Vindman, who was the NSC’s top expert on Ukraine, prepared the readout of the call and was responsible for the error.

Vindman testified that the statement about the call put out by the White House was “not entirely accurate” because Trump did not mention corruption, which had been included in the talking points that Vindman prepared in advance for Trump to use in the call.

But to be clear, we are not aware of any evidence that Vindman relayed false information to anyone about what Trump and Zelensky discussed during their July 25 conversation.

Infants as young as 19 months can be altruistic, study finds

Wed Feb 12 , 2020
It’s been well-documented that human adults can engage in altruistic behavior — giving up something valuable to help others, even at a personal cost — but a new study published in the journal Science Reports suggests that babies can be altruistic, too.  To reach this conclusion, researchers from the University of Washington, […] 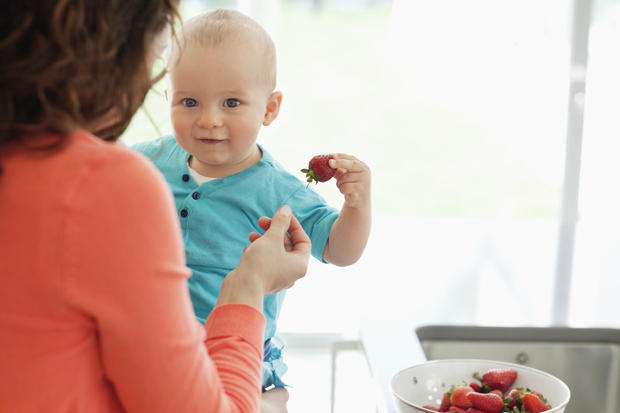