BERLIN (Reuters) – Facebook <FB.O> is making a big marketing drive in Germany just as the country starts to implement tough regulations designed to clamp down on online hate speech.

The U.S. corporation has historically done little advertising of its own but has plastered billboards across Germany with posters featuring ordinary people expressing their concerns about the site, along with explanations of how to use it better.

“Germany is not as highly penetrated a market as we’d like it to be. A lot of it has to do with cultural norms,” chief marketing officer Gary Briggs told a tech summit organized by Wells Fargo bank earlier this month.

The Facebook campaign comes as Germany prepares to enforce a new law which could impose fines of up to 50 million euros ($59 million) on social media sites that fail to remove hateful messages promptly.

Germans have embraced ecommerce – the country is Amazon’s second biggest market after the United States – but they are much more reticent about social media than many other nationalities.

Public concern about rising hate speech since the arrival of more than a million asylum seekers in Germany over recent years has added to longer standing anxieties born of the country’s 20th century history.

Germans closely guard privacy and personal data, partly due to extensive surveillance by East Germany’s Stasi secret police until the 1989 collapse of communism and, before that, by the Nazi-era Gestapo. Facebook has put a particular focus on privacy in its latest German campaign.

One poster pictures a woman with the comment: “I once posted something that I should never, never, never have shared.” Underneath is the image of a trash can and a Facebook-style blue button marked “Delete it and it disappears”.

Data protection campaigners question whether users can delete personal information from their social media accounts as easily as the Facebook campaign suggests.

Privacy questions have also attracted the attention of Germany’s cartel office. In a preliminary report, the office found on Tuesday that Facebook held a dominant position and questioned its collection of third-party data on its users.

Facebook’s head of data protection Yvonne Cunnane disputed the report, calling it inaccurate. She said the firm plans to introduce more controls as well as more education about how Facebook protects data and security in the coming months.

The campaign “Make Facebook Your Facebook” started in 2016 and was relaunched in July. It has reached a new intensity in recent weeks, with the ads also featuring in top newspapers and magazines, on television and on Facebook itself.

About 41 percent of Germans have active Facebook accounts, well below the 66 percent in the United States, 64 percent in Britain and 56 percent in France, according to a survey by social media agencies Hootsuite and We Are Social.

“Germans are in general more reserved and privacy has a bigger value,” said Rolf Schwartmann, professor of media law at the Cologne University of Applied Sciences.

A Facebook spokeswoman said there was no link between the new law and the marketing campaign, adding that hate speech was just one of several areas of concern it was trying to address.

“Facebook has attracted a lot of attention because the far right scene has used it so much,” said Renate Kuenast, a parliamentarian from the environmentalist Greens. Kuenast has lobbied Facebook to pull offensive posts from her site, but is worried the law goes too far.

The law was passed in June after a surge in threatening postings, particularly directed against foreigners and politicians like Kuenast who support refugees.

The anti-immigration Alternative for Germany (AfD) party, whose active use of social media helped it enter parliament for the first time in the September election, last week proposed scrapping the new law, saying it limited free speech.

While Facebook lobbied against the legislation, it is busy preparing to implement it, developing a new reporting form for users to alert it to possible unlawful content and recruiting a representative as point of contact for German law enforcement.

“We are working hard to comply with the law,” said a Facebook spokeswoman, adding it is also making efforts to try to combat hate speech globally.

The law will come into full force on Jan. 1, when sites must have processes in place to respond to complaints and quickly remove offensive posts.

Facebook said it now has more than 1,200 people based in Germany helping it to check content, part of a global team it has rapidly expanded to around 7,500.

Roland Heintze, head of social media consultancy Faktenkontor, noted that Facebook had invited German media to tour its content moderation offices in what he sees as part of a broader campaign to improve its image, be it over hate speech, privacy or its tax affairs.

“In the German market at least, the signals are clear that they urgently need to pay attention to awareness,” Heintze said. “Interaction on Facebook is declining significantly in Germany, and social networks live from interaction.”

Only 40 percent of Germans trust commercial content on Facebook, compared with 62 percent for German professional network Xing and 56 percent for Microsoft’s <MSFT.O> LinkedIn, a survey commissioned by Faktenkontor showed.

In a trend reflected in other countries, German teens are ditching Facebook, according to Guido Modenbach, head of market intelligence at broadcaster ProSiebensat 1<PSMGn.DE>, who says use has fallen 43 percent in the last three years.

“It’s hard to find a teenager who is actively using a Facebook account,” he told investors recently, adding that Facebook’s Instagram photo-sharing app which remains popular among teens does not deliver as much data for advertisers.

But Facebook’s Briggs said the German advertising campaign is paying off.

“We found it to be very effective as a way to overcome the urban legends, if you will, about what Facebook supposedly is and it is working very well to drive engagement and overall metrics for us in Germany,” he said.

After one week, Myanmar silent on whereabouts of detained Reuters journalists

Tue Dec 19 , 2017
Reuters journalists Wa Lone (L) and Kyaw Soe Oo, who are based in Myanmar, pose for a picture at the Reuters office in Yangon, Myanmar December 11, 2017. REUTERS/Antoni Slodkowski December 19, 2017 YANGON (Reuters) – Two Reuters journalists completed a week in detention in Myanmar on Tuesday, with no […] 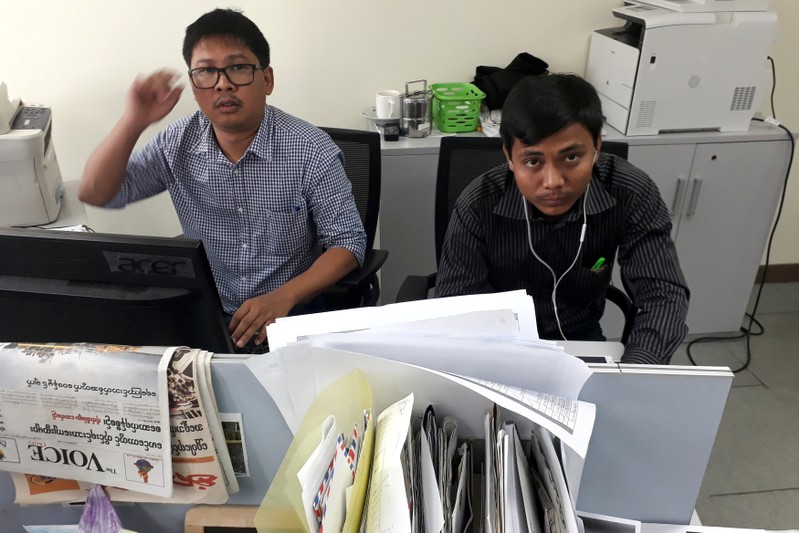