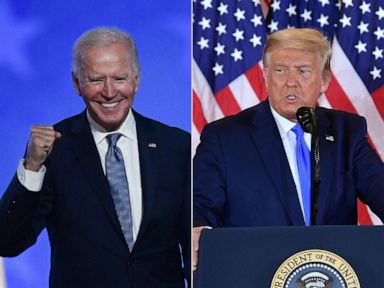 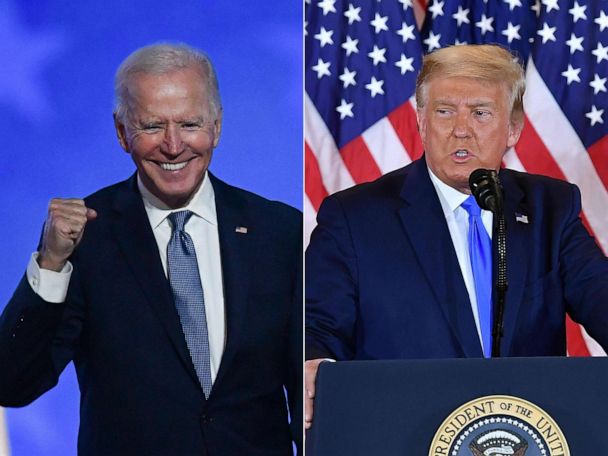 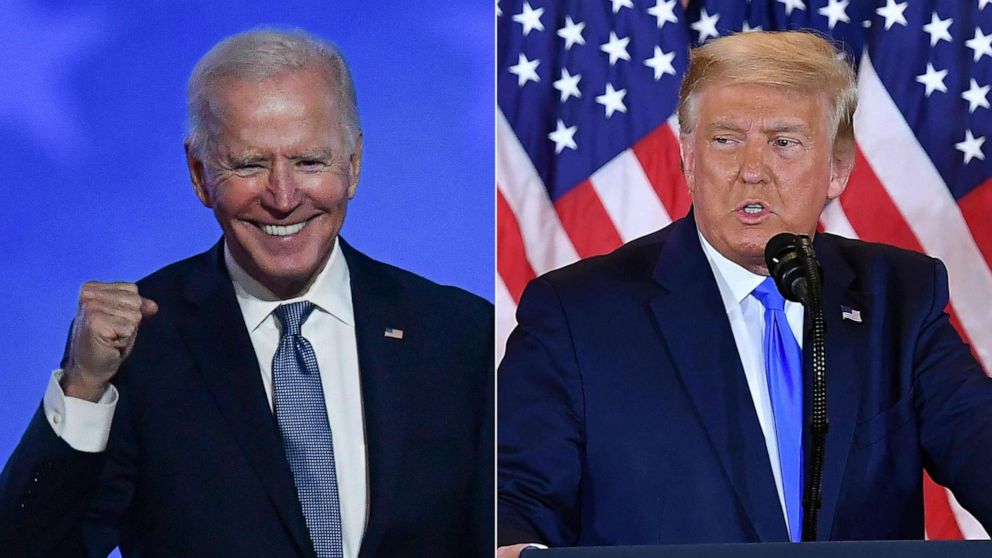 The election that changed how Americans vote also changed the speed with which some of their votes are counted, leaving the country hanging for an official outcome even as former Vice President Joe Biden improved on Hillary Clinton’s performance nationally in a range of voting groups.

An unprecedented 64% of voters cast their ballots early, including 34% by mail – with those votes still being counted in several key states. Winners weren’t projected by the wee hours in states including Pennsylvania, Michigan, Wisconsin, Georgia and North Carolina.

Still, the national exit poll supported some broad conclusions. One was the still-growing share of racial and ethnic minorities in the electorate – 35%, up from 30% in 2016 and 10% when the first exit poll was produced in 1976. The diversity train rolled on.

Donald Trump improved in some gauges. Well fewer than half of voters, 44%, said he has the temperament to serve effectively as president – but that was up from 35% four years ago. And while 53% saw him unfavorably, that was down from 59% in 2016.

Biden, further, won first-time voters by 34 points, vs. 20 for Clinton. Voters who’ve served in the military backed Trump by 7 points, down from his 24-point margin in this group in 2016. And, while a slighter difference, Biden was +3 points in the suburbs, vs. Trump’s +4 four years ago. And the gender gap narrowed considerably, but largely because Trump won men by 1 point, vs. 11 points four years ago.

Trump’s approval rating, 47-51%, approve-disapprove, was underwater, but mildly so. The only two presidents with negative approval at the time of their second election both lost – Jimmy Carter and George H.W. Bush – but both had much lower approval than Trump’s.

Trump and Biden fought essentially to a standstill on who’s better able to handle the economy, while Biden led, 51-43%, as better to handle the coronavirus pandemic. And voters by about the same margin, 51-42%, sided with Biden on stopping the spread of the virus as a priority, rather than with Trump on rebuilding the economy as a priority.

That’s even though 55% said the pandemic had caused them financial hardship; those who said so supported Biden by 30 points.

The public divided about evenly on whether the U.S. response to the pandemic has gone well or badly, with big state-to-state differences. At the same time, twice as many said it has gone very badly, 34%, as very well, 17%.

In a much larger disconnect for Trump, voters by 67-30% saw wearing a mask as a public health responsibility rather than a personal choice, with sharp vote differences between the two groups.

Lastly, two results were heartening, perhaps, across partisan lines. Ninety-three percent said their state makes it somewhat or very easy to vote. And 87% were somewhat or very confident that their vote would be counted fairly. Eventually.

College-educated whites have gone for the Republican in Arizona presidential election exit polls since 2000 (as far back as the question was asked); this year they supported Biden, 55-44%. Trump, in turn, won non-college whites.

Independents outnumbered Republicans by 8 points and Democrats by 14 points. The growing share of independents (up from just 18% of voters 24 years ago) has shifted the state’s reputation as a Republican stronghold, despite its only having voted for a Democratic candidate for president once since 1952, in 1996. Biden lead among independents, 52-39%.

Maricopa County accounts for six in 10 Arizona voters; Biden held a scant 3-point edge there, 49-46%. Trump had a 5-point lead among suburban voters in the state overall.

Hispanic voters accounted for 19% of Arizona voters, compared with 15% in 2016 and 18% in 2012. They backed Biden by a 30-point margin, similar to his 34-point win among Hispanic voters nationally.

Biden gained ground with moderates, 59-39%, but it wasn’t enough in a state where conservatives outnumbered liberals 38% to 20%.

Regionally, voters in the North/Panhandle divided 50-49% Trump; this group backed Trump by 20 points in 2016. Trump made it up with a closer margin in the Miami/Gold Coast region – just a 13-point Biden lead there, vs. Clinton’s +27.

Georgia hasn’t gone for a Democratic presidential candidate since 1992. Hillary Clinton came within 5 points of winning the state in 2016; exit poll results showed Biden improving on that showing, albeit with votes yet to be counted.

Trump won Michigan by 10,704 votes out of 4.8 million cast in 2016, the narrowest margin of any state that year and the first time a Republican presidential candidate carried the state since 1988. He was propelled by a 16-point margin among independents, an 11-point margin among suburbanites and by narrowing Obama’s 2012 margin among those in union households by 20 points. Exit poll results showed Biden with gains among each: It was 56-40%, Biden-Trump, among independents, 50-49% in the suburbs and 61-37% among those in union households.

Biden’s improvements in these groups were countered by other shifts. Democrats outnumbered Republicans by 9 points in 2016 vs. 4 points Tuesday, 39% Democrats to 35% Republicans. Voters in union households accounted for 22% of the Michigan electorate, compared with 28% in 2016. And 18- to 29-year-olds, a strong Biden group, accounted for 15% of voters, compared with 18% four years ago.

Trump hoped to recreate his narrow victory in North Carolina, which he won by 4 points over Hillary Clinton four years ago. Increased turnout among racial and ethnic minorities didn’t help; they accounted for 36% of North Carolina voters in exit poll results, up from 30% in 2016, and broke for Biden by a similar margin as then, 79-17%.

Biden also was aided by a blue shift among college-educated whites, who moved from +19 points for Trump four years ago to a 50-48% Trump-Biden split, the narrowest Republican margin in this group in exit polls since 1988.

Trump consolidated support among his core groups. Conservatives accounted for 39% of voters and backed Trump by a 79-point margin, up from 68 points in 2016. Trump also widened his margin among non-college whites, going from a 44-point win over Clinton to 56 points vs. Biden.

With more than a third of Pennsylvania voters casting their ballots early and state law forbidding counting before Election Day, the vote count in the state – which Trump won by less than a point in 2016 – wasn’t completed Tuesday.

Voters prioritized containing the coronavirus, 54%, over rebuilding the economy, 42%, and more thought that Biden could handle the pandemic better than Trump, 54-43%. But economics still mattered: Forty-eight percent said they experienced COVID-19-related financial hardships and 38% picked the economy as the issue that mattered the most to them in their vote (the plurality choice out of five presented). As nationally, there was a split on who could handle the economy better, 50-48%, Trump-Biden.

With a raging pandemic and the third-highest per-capita case count in the nation, 55% of Wisconsin voters said U.S. efforts to contain the pandemic are going badly. By a 55-41% margin, Wisconsinites said Biden would do a better job dealing with the pandemic than Trump. The candidates were rated more closely on handling the economy, 51-46%, Biden-Trump.

As in 2016, Trump won non-college white men – but his 20-point, 59-39% result was down from a 43-point margin four years ago. And while Trump and Clinton evenly split college-educated white men, this group backed Biden over Trump, 54-45%.

Wed Nov 4 , 2020
Coronavirus Wisconsin has experienced one of the worst COVID-19 outbreaks in the country this fall. Since September 1, cases have nearly tripled in Wisconsin and deaths have increased from 1,130 on September 1 to more than 2,000 cumulative deaths due to the virus as of November 1, according to the […] 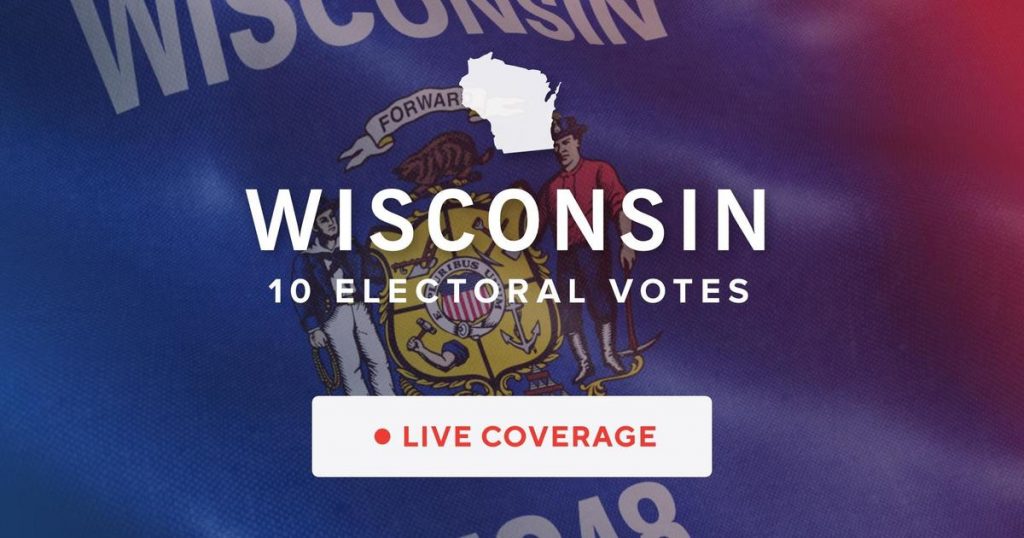