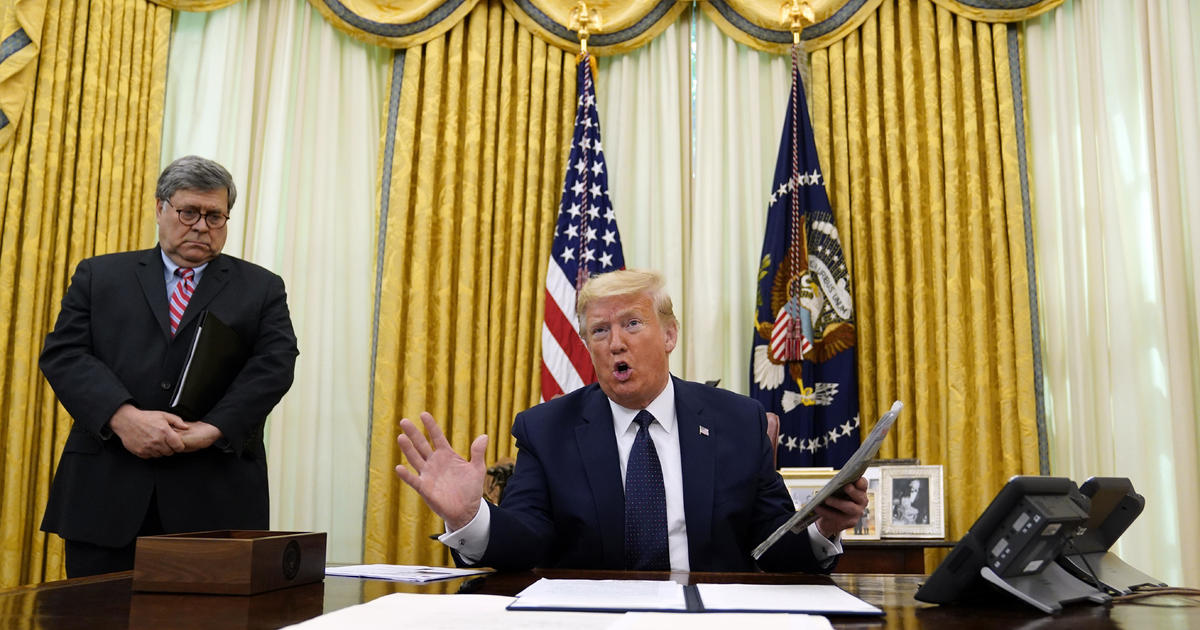 Washington — President Trump on Thursday signed an executive order taking aim at the legal shield that protects social media companies from liability for content posted by users on their platforms, ramping up his attacks on tech giants over alleged censorship and a first-ever fact check on his own tweets this week.

In an Oval Office signing Thursday, the president declared that social media companies that engage in “censoring” or any “political conduct” will not be able to keep that shield. One senior administration official told CBS News the order is intended to curb the protections social media companies have shield against liability for content like comments, posts and videos. The order would allow regulators to claim internet companies are censoring free speech when they delete users’ posts or accounts.

“The choices that Twitter makes when it chooses to suppress, edit, blacklist, shadow, ban are editorial decisions, pure and simple,” the president said Thursday. “They’re editorial decisions. In those moments, Twitter ceases to be a neutral public platform and they become an editor with a viewpoint, and I think we can say that about others also — whether you’re looking at Google, whether you’re looking at Facebook and perhaps others.”

He continued, “One egregious example is when they try to silence views that they disagree with by selectively applying a fact check. … Therefore today I’m signing an executive order to uphold the free speech and rights of the American people. Currently social media giants like Twitter receive an unprecedented liability shield based on the theory that they are a neutral platform, which they are not.”

The order calls for new regulations under Section 230 of the Communications Decency Act, which provides the shield for internet companies protecting them from liability for user content on their platforms. The measure has been in place for more than two decades, though some Republicans and Democrats on Capitol Hill have targeted Section 230 and have been calling for changes to the law that would weaken its protections.

Attorney General Bill Barr, present for the executive order signing, claimed social media companies lose their protections as platforms when they begin to editorialize and offer comment on content. Barr said the Trump administration is working on litigation and legislation in this area, and the president said the legislation may have something to do with amending or doing away with Section 230.

Mr. Trump’s executive order, which was first reported by The Wall Street Journal, is certain to face legal challenges. The president recognized that Thursday.

“I guess it’s going to be challenged in court, but what isn’t?” said Mr. Trump.

The president said he would try to shut down Twitter if his lawyers found a legal way to do so. But he recognized there would be significant hurdles and he’d “have to go through a legal process.”

While the president’s criticisms of Twitter and Facebook are not new, his battle with the social media giants escalated Wednesday after Twitter for the first time applied a fact-checking label to two of his tweets claiming mail-in voting leads to voter fraud.

“Republicans feel that Social Media Platforms totally silence conservatives voices. We will strongly regulate, or close them down, before we can ever allow this to happen. We saw what they attempted to do, and failed, in 2016,” Mr. Trump tweeted Wednesday morning.

Later Wednesday night, the president claimed tech giants were attempting to interfere in the upcoming presidential election, saying they are “doing everything in their very considerable power to censor in advance of the 2020 election.”

“Stay tuned,” he teased to his more than 80 million Twitter followers.

“The president’s executive order does nothing to address big Internet companies’ complete failure to fight the spread of disinformation,” Pelosi said. “Instead, the president is encouraging Facebook and other social media giants to continue to exploit and profit off falsehoods with total impunity – while at the same time directing the federal government to dismantle efforts to help users distinguish fact from fiction.”

Mr. Trump has suggested in the past that U.S. regulators should sue social media companies and accused them of suppressing and censoring conservatives on their platforms. The White House last year held a social media summit with conservative groups that excluded Facebook, Twitter and Google.

Still, the president is an avid Twitter user and says the platform allows him to speak directly with supporters and the American people. Mr. Trump said he’ll keep his account because he can refute “fake news” for his followers and supporters.

Lawyer and CBS News contributor Jonathan Turley said in an op-ed published in The Hill this week that the president’s executive order isn’t likely to have much weight without backing from Congress.

“His new executive order would seek to eliminate key liability protections for social media companies while calling for federal investigations into political bias,” Turley wrote. “But without legislative support, such a crackdown on these companies is highly unlikely to succeed. However, Congress has been angling to curb online free speech for years.”

Fri May 29 , 2020
Health checks are few and cases are up in San Diego County. May 29, 2020, 1:52 AM 6 min read 6 min read Share to Facebook Share to Twitter Email this article As the coronavirus pandemic grips Mexico, thousands of vehicles a day are still crossing the border with the […]